Protestors shut down the Bay Bridge during peak commute on MLK Jr. Day

And then this happened this afternoon…

Protesters marching on Martin Luther King Jr. Day blocked traffic on the Bay Bridge after earlier interrupting traffic on an Interstate Highway 80 off-ramp in Emeryville, according to the California Highway...

Westbound traffic was halted for about 45 minutes and about 25 people were arrested, according to CHP.[/quote]

I believe the point was disruption but as a white dude, it probably isn’t my place to tell black, queer protesters that they are doing it wrong.

Well, to be fair, people getting murdered is a bit more severe than a delay getting home, and while we may think protests are better when they’re out of sight and unnoticeable, the point is also to emphasize the importance of the cause.

It’s perfectly reasonable for people to believe that authority vs. minority crime isn’t being taken seriously after almost all the police involved in the shootings have gone unpunished.

At least the cops didn’t murder anyone this time. Although it’s disgustingly pathetic that that’s even a valid sentiment to express.

It’s certainly not my place to tell them what to do, but I don’t see the rationale where this approach will help. It feels like the racist creeps will feel vindicated (“see, they are lawless blah, blah”), and everyone else will just be late for work. It’s not that black people being killed by cops isn’t a massive, massive deal, I just can’t find the blocking a bridge->black people not being killed by cops/society really deciding it’s not acceptable for cops to murder minorities/resolve systemic racism connection. I realize if I were not a white dude I might see things very differently, which is maybe why I don’t understand the approach, and I have no idea what really would work to end the series of hideous travesties of justice by law enforcement.

Yeah, people get desperate and less rational when they feel helpless.

And to be fair, they’ve been told to be patient for generations. I would probanly be less well behaved, if anything.

I could see the strategy working if, perhaps, every time someone was slaughtered they did this and clearly sent the message that they’ll block the freeway every time a cop decides to murder someone. I could see the general population getting fed up with the killings if the message is that there’s consequences.

I don’t have the insight to know how effective this protest was in advancing their goals, but I do know one thing…

Blocking a bridge in SF will get you noticed. And frankly, I just can’t get annoyed at these kind of tactics. Peaceful protest is important.

And to be fair, they’ve been told to be patient for generations. I would probanly be less well behaved, if anything.

There is that. Might not win hearts and minds, but clearly the black community hasn’t got much chance of that anyway since society clearly doesn’t care much about cops murdering black people.

I could see the strategy working if, perhaps, every time someone was slaughtered they did this and clearly sent the message that they’ll block the freeway every time a cop decides to murder someone.

Yeah, and I’d really sympathize, though I’d fear you might also wind up with laws that gave 20 year sentences for blocking traffic.

I could see the strategy working if, perhaps, every time someone was slaughtered they did this and clearly sent the message that they’ll block the freeway every time a cop decides to murder someone

Doesn’t it just burn that to prevent murder, one needs to be an inconvenience?

Every time I hear about another police officer slaughtering someone, the video of the Tamir Rice killing goes through my head. It’s been on my mind a lot lately. There was no indictment. If you can’t indict two officers who drove right up to a kid they thought had a weapon and was an active shooter, got out and executed him, what hope does the country have?

It’s too fucking John Wayne. It’s an obscene mockery of justice. And it can’t be tolerated.

I read a post on another forum written by someone that’s part of a political group on Facebook. Mostly it’s just people shooting the breeze and having light arguments about weed and Bernie Sanders.

Unfortunately, racist slurs are also pretty prevalent in the group. The guy who runs the group has been constantly asked to step in and curb the hateful language but he’s always refused, claiming that it’d be a violation of the First Amendment or some shit. This policy extended to every other problematic post from gay bashing to xenophobia.

Then someone in the group decided to make a point by posting Star Wars spoilers. The offending post was canned within hours and the user responsible was banned from the group. No explanation, no discussion, nothing. Of course, the peanut gallery of the group agreed with the moderator’s actions without any questions about consistency.

That situation is like a little Internet microcosm of what’s happening here, and both situations beg the same question: What are the things that make us angry? It’s pretty silly to get furious over movie spoilers when seeing blatant racism doesn’t even make a blip on your emotional radar.

Likewise, what does it say about a nation’s character when its citizens are more angry about traffic than it is about 12 year old boys and unarmed men getting murdered by law enforcement with little to no consequences? If these protests were over a 12 year old white girl or an unarmed white man, we’d be seeing a very different response. Actually, there wouldn’t even need to be protests in the first place. If the victims were white, those cops would’ve been doomed to life sentences in federal prisons where all the inmates would know them as former cops and kid killers.

I get the frustration. I’m not black but I’m still a man of color, and if there were protests in my area keeping me from getting to work, I’d be pissed off, too. It’s not like I’m responsible for these deaths, nor do I share the white privilege that allowed those dirty cops walk free. Why screw over my day to make your point?

But I still think it’s wrong to talk about these protests as inconveniences. We should be discussing why they’re happening in the first place and what our response tells us about ourselves.

A few weeks ago, my pastor gave a sermon on anger. He challenged the notion that we are, essentially, “good people”. This idea of, hey, I’m not perfect, but I’m not a rapist or murderer or Donald Trump, so that means I’m still a pretty good person.

My pastor talked about a horrible Monday he had. He was about to do his laundry when he discovered he didn’t have any cash, so he walked 15 minutes to get money from the ATM, walked 15 minutes back, then realized he had more laundry than he thought. He went back to the ATM then came home find that he ran out of detergent, so he had to walk out again and travel 30 minutes to get more detergent. By the time everything was over, he lost 3 hours of his day to nothing, time that he could’ve spent studying, prepping, or relaxing.

But that night when he was praying and reflecting on his day, the question hit him: What makes me angry? Why is it that I get outraged by things that inconvenience me, but I don’t have any anger to spare for the young boys in Afghanistan who are kept as sex slaves by warlords, raped daily and screaming out into night with no one to hear them nor help them? Why is it that I’m not outraged over the thousands of Christians and Sunni Muslims being slaughtered by ISIS? 663 million people in the world don’t have access to clean water, and diseases from dirty water kill more people every year than all forms of violence including war. 43% of those deaths are children under the age of 5. Why does that not move me to tears?

The answer is because we’re actually not as good as we think. We’re pretty selfish, and sometimes, it’s good to be reminded of that fact. We should, if you forgive the cliche, check our privilege, and protests like that expose the double standards we hold.

So at the end of the day, I am all for publicly disruptive protests, even if they disrupt my own life. My only concern with protests like this is that huge traffic jams can have lethal consequences. Ambulances can lose patients whom could have otherwise been saved. For that reason, the choice of venue was extremely short-sighted and selfish on BLM’s part, but I don’t disagree with the objective of the protest.

Sad, isn’t it? Killing unarmed kids = no big deal. But make me 10 minutes late for my office job? Oh, well, now it’s ON.

Sad, isn’t it? Killing unarmed kids = no big deal. But make me 10 minutes late for my office job? Oh, well, now it’s ON.

Who has said it was no big deal though?

No matter what, the racist creeps will never be on board with BLM. Who cares if they are or not… the point is to create enough disruption in civilized society to allow for a discussion on these issues which will lead to real social change.

I have no idea what really would work to end the series of hideous travesties of justice by law enforcement.

Social disruption works. Think about what groups like CORE and SNCC did and how that was perceived by ordinary people going about their lives… it generally wasn’t met with widespread support. these actions are no more or less disruptive than the classical civil rights era protests. 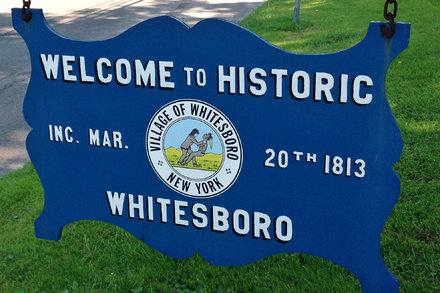 Whitesboro, N.Y., in Reversal, Will Change a Logo Called Racist

As recently as two weeks ago, residents of the community in central New York voted to keep the official seal, which depicts a wrestling match between a white man and the local American Indian chief.

But no matter how much fuss the seal caused, it endured. As recently as two weeks ago, residents cast 157 of 212 votes in favor of letting the image represent the Oneida County village, which has a population of roughly 3,700.

But what it could not survive, it seems, is widespread attention online.

“In speaking with a lot of the residents that voted to keep the seal, I think they were surprised at the negative attention that Whitesboro was receiving as a result of the vote,” Mayor Patrick O’Connor said in a statement.

On Friday, the village said that it would work with the Oneida Indian Nation to discuss the creation of a new emblem.

Protesters have been closing the Bay Bridge for decades. Protesters blocked the Bay Bridge during the first nights of the original Gulf War in 1991. And somebody always says what about the ambulances?

Not to mention that most protestors will just let emergency vehicles through, because that’s a standard instruction when you’re organising a protest. These are protestors, not rioters.

How do you let emergency vehicles through when you have a car blocking each lane with lengths of chain running through them (as well as connected to other people) all locked up with a couple of miles of gridlock behind you? You saw the pictures of what it looked like, I assume?