Based on what I hear almost every time I tune into the local classic rock station, I assume it was an ad for a gentleman’s club.

Wake me when it’s deciphered to show an alien Fragle Rock episode.

For the first time, a radio signal sent from a galaxy, which is almost 9 billion light-years away from the Earth, has been captured, media reports said on Friday.

It’ll be a repeat of Desert Island Disks.

So, it’s from a long time ago, in a galaxy far, far away…

The 21-cm line is a particularly interesting* phenomenon, as it occurs from a metastable state of hydrogen. In its ground state, the electron in the atom can have its magnetic field aligned with the proton or in opposition to it; think of holding two bar magnets side by side, and how they repel when aligned, and attract when opposed. So a hydrogen atom in the aligned state has a bit more energy, and so can emit a photon by flipping into the opposed state.

For quantum mechanical reasons that have to do with what state changes are easier than others (using the terms “permitted” and “forbidden” in an arguably incorrect fashion), the average time needed for this flip to take place is around ten million years. So its usually only seen in very cold gas, since collisions between atoms can de-energize the state before a photon can.

Of course, in this case the line wasn’t even seen at 21 cm because of the presumably considerable redshift of the host galaxy, but that’s just boring old Doppler effect stuff.

*to me at least, ymmv

That’s older than the Earth, so hopefully they won’t be sending any ships to shake the planet, looking for their long lost friends.

Message translates as “goodbye and thanks for all the fish”.

It’s not a signal unless it’s actually intended for communication, so the Economic Times article is misstating what actually happened. Radio astronomers detect radio emissions from even more distant objects all the time, since we can look back to about 13 billion light-years in the universe.

9 billion years ago, there wasn’t as much heavy metal.

Heavy metal is eternal and ever present. Blaspheme no more!!

Perhaps they were trying to get in touch with us about our car warranty.

I bet Zeppelin rocked that galaxy into existence!

Wake me when it’s deciphered to show an alien Fragle Rock episode.

Heavy metal did take some time to form. 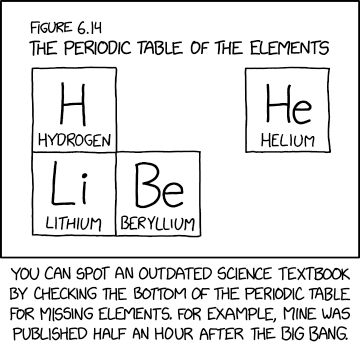 Wait for a few dozen years after the Big Bang and the Be disappears (it is all radioactive beryllium-7 that decays to lithium with a half-life of 50ish days). It’ll take a few hundred million more years before heavier metals are created in early stars.

Paging @nixiebunny for the significance of this, if any. The news article was a pain to read: “this far off galaxy has a mass more than twice that of our closest stars” - ya think?

The actual quote from the article is “this far-off galaxy is double the mass of the stars which are visible from Earth”, which is badly phrased but which I interpret to mean that the galaxy has twice the mass of the stars that are visible in it, with the additional mass coming from hydrogen gas in the galaxy that doesn’t emit visible light but is detectable from its radio emissions.

Well to the naked eye you can only see a few thousand stars. Even the smallest globular clusters have twice that.

Well if we have to debate on what they possibly maybe meant then it is poorly written, which was my point.