Originally published at: Reddit user shows the rest of us Duolingo nerds what it looks like to complete an entire language | Boing Boing

I’m currently doing the Irish program (just about to hit the end of the second unit), but I never do the crown lessons… Maybe I should go back and do them?

look at his “report card,” displaying all 10 units (which contain more than 1,282 “crown levels,” or lessons, in total) of purple circles — the color that denotes the highest level possible for each pack of unit lessons in this gamified language app.

but can he speak Spanish?

I’m just about to break gate 3 in Spanish after almost two years. I’ve resigned myself to the fact it’s going to take many years more.

Hunh!
I’ve been doing Modern Greek on Duolingo for actual years. I’m currently on a “streak” of 789 consecutive days - misleading because to begin with I really didn’t give a damn about “streaks”. I still don’t care that much. I do two lessons a day. I possibly could do more, but I see these characters who do ten lessons a day and think “Fine for you. That’s not for me.” When I started Modern Greek they didn’t have these crowns, Plus, about two years ago they revamped their system and lost about a dozen lessons that I had completed. I did go back and do them again but I’m not going back to do the lot! Their league system amuses me. I’m currently on the Amethyst league. When I complete a crown I get extra points (lingots!) and they boost me up a league. But I just plod along at two lessons a day, and next week go down a league. I used to like their comments section, but all comments for Modern Greek have been disabled. Possibly ( I have my suspicions) they’ve just been disabled for me. I did have a barney with the moderators where I quoted Fowler’s Modern English Usage at them. They are clearly American and don’t have a good grasp of English outside of American usage. The inconsistency is irritating, too. For instance, they’ll give two alternative translations of a word, and then penalise you for using one of them. That said, I am impressed with their machine learning methodology, and their approach to Modern Greek does lead to a subtle understanding of how the words are put together. If only I could remember the genders.

When I see someone do the same for Japanese, I will only then bow and scrape before a Duolingo subscriber.

I did have a barney with the moderators where I quoted Fowler’s Modern English Usage at them. They are clearly American and don’t have a good grasp of English outside of American usage.

I agree with Fred, about the moderators understanding of American English. Moreover, they should make use of translations that better reflect what the original language is doing. Often enough I’ve noticed opportunities, when translating Japanese, they could have structured the grammar syntax of the English translation to reflect the similar structure in the Japanese. Yeah, the English might have been a bit tortured, but it’s not like Japanese grammar isn’t like that to a native English speaker.

You’re using Duolingo the exact same way I am. 2 lessons a day and damn the torpedoes. I also thought for a while that the comments had only been disabled for me because I was too punchy in the comments and in reporting the often literal Nazis that are unfortunately not uncommon in the Norwegian module. Turns out they have turned off their entire comment system for everyone and for all languages, though. 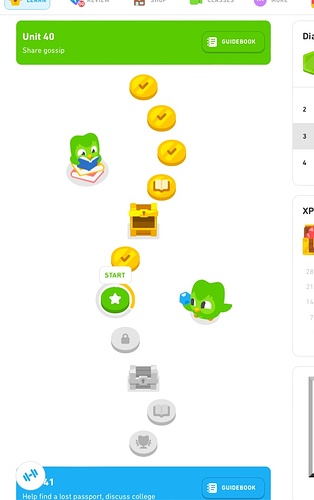 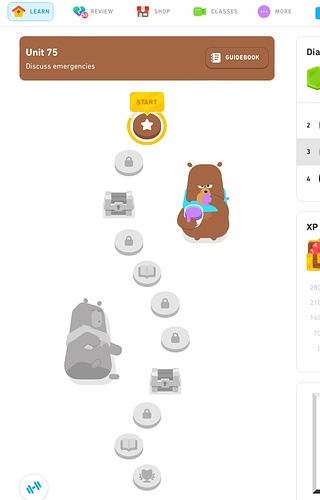 I’m at about 605 day streak now, Spanish. I didn’t care about the leagues or the other people that show up until my adolescent son pointed all that stuff out to me. So I kinda half-care now. Currently in Obsidian league. They have that night owl and morning chest that gives you way more points, so you have to be strategic on when you do the lessons too, and these chests make it such that you practice at least twice a day to maximize points.

Sometimes I wonder if those other people are just bots that are there to entice me to keep going, haha. Also, this redditor didn’t show if they also did all the Stories too (or did they?).

This is pretty cool, though, @Carla_Sinclair , thanks for sharing this!

I’ve got all purple for Irish and Latin (although, to be fair, the Latin course is really short). I’ve gotten the golden owl for French (completed all to at least level 3) and Bokmål (to level 4). Spanish I’ve only gotten through unit 4, and am backfilling on competence before attempting to progress further. I’ve technically gotten the golden owl in Italian, but only at level 1, and have been neglecting it. And I’ve golden owled in Anglais (doing English, but from the French side), but that’s another short one.

Hi, I’m Catsidhe, and I may have a problem.

Start your duolingo week as late as possible-- you’ll get put in a league with 29 other slackers. Some people will even suggest using a streak freeze and starting the next day.

Duolingo is introducing a big change on 26 August.

I do the web thing; so I miss half the gamification. Probably a good idea.

How do you go about backfilling? I definitely feel the need to perhaps even delete and re-apply to the Japanese course–just to improve my competence. I have a 922 day streak and about a 1/5 way through Unit 4. Unfortunately, there’s all these new features added well after I first began that’s left me weak with Katakana and writing characters, because I didn’t have the opportunity to learn them well early on.

BTW, your 2182 day streak makes me feel less obsessive about my own progress.

Primarily, it’s just going back and earning the crowns up to gold, which usually drills me relatively well on that aspect, rather than forging ahead in completing units in the quest for the gold owl. (And note that the names of the exercises are mostly irrelevant. Sure the sentences might be about housework or high school or wizards and dragons, but you’ll usually find that the meat of the exercises is the passé composé vs imparfait or the genitives of irregular plurals or gendered adjectives and word order).

But even when you’ve gotten purple, you can go back and “Practice”. On the App, you can even do a “Hard Practice”. And you can do it as much as you like, even if it only gives you points for the first time.

At which points will Duo come up and say you’re performing flat and suggest writing for Fifth Tone or something? Not that you wouldn’t purple on the first try…

what do you think of the new home screen?

It seems like it takes choice out of the equation.

And judging by where I’m placed on the path, versus the tree it seems like I’ve been “doing duolingo the wrong way”

That’s good to know about the comments. Thanks.

Generally speaking, I like Duolingo, but it’ll take a looooong time to get fluent if you’re doing a few lessons a day. It can be infuriating too when they don’t explain things. Thank FSM for the comments section.

Agreed. It bugs me that there’s no option for choosing which version of English to use. Yes, it accepts me typing things like “trousers” instead of “pants” but anything multiple-choice uses American English.

I didn’t care about the leagues or the other people that show up until my adolescent son pointed all that stuff out to me.

The problem with the leagues is there’s literally no point in them. You don’t get anything for moving up or being in a higher league. Unless you’re competing with your actual real-life friends to be in the highest league, it’s not worth caring about IMHO.

When I started Modern Greek

it was what-is-now ancient Greek?