I thought this was an interesting article. 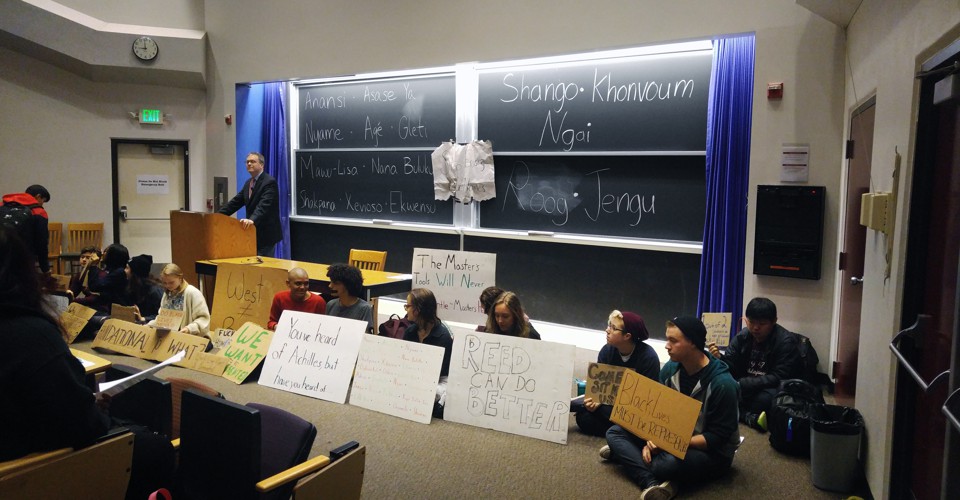 The Surprising Revolt at the Most Liberal College in the Country

Activists are disrupting lectures to protest "white supremacy," but many students are taking steps to stop them.

It’s only one article, but going by what’s presented, it sounds like bullies using intimidation to foment a climate of fear. Or as one of the students puts in late in the article, demagoguery. What do you all think?

Sat in that very classroom for HUM 110.

I think protest is wonderful. Doesn’t anyone want to hear what the professor has to say? Or do the student protestors only want to speak?

@GulliverFoyle interesting indeed. Confusing at first but made more sense after reading the whole thing. OTOH I remain a bit confused overall but am enjoying seeing The Atlantic’s coverage of what is going on in universities over the last few years.

This has been getting pretty good coverage in the academic news since it began. I suspect there is a connection between The Atlantic deciding to cover it and this recent op-ed in the WaPo: Opinion | Professors like me can’t stay silent about this extremist moment on...

In dealing with differing points of view, nuance is not oppression.

Reading the article, it sounds like they’ve got their own mini cultural revolution going on there.

They’ve got the ritual denouncement of anyone who isn’t as radical as they are, the demonstrative activism and taking of extreme positions to show loyalty to the movement,- the attacking of knowledge that is somehow deemed to be “old thinking”, self-criticism sessions in the form of “privilege checking” and the hounding of academics and intellectuals by their students.

It may not work as a suitable general humanities class, but it certainly manages to cover history and psychology, probably without the participants realising it.

I sense there’s another dimension to it though, which is that bullies are using the cover of a noble cause to shut down discussion that they don’t like within the activist community. The attacks on other POC who dissent with RAR’s methods, and the deliberate traumatizing of a mixed-race gay woman teacher with PTSD sounded pretty disgusting. That said, I recognize one article isn’t a comprehensive source of information, which is why I sought additional viewpoints.

What do you all think?

Campus activism is the petri dish of democracy, and you’ll always have some mutant strains popping up. It’s where we test the limits of discourse.

Looks like the students are sorting it out for themselves, though.

it sounds like they’ve got their own mini cultural revolution going on there.

Thats pretty much what i read as well but wasn’t confident of my opinion to say so.

Fascist is as fascist does. And when black-shirted people deliberately try to trigger the PTSD of someone who’s done them no harm and wishes only to teach…

Well what else do you call it?

Reed is tiny, less than 1500 students at any given time.

It’s not the big protest school in Portland. Portland State University, with its campus downtown, is a much more significant influence on local politics, radical and otherwise.

Reed doesn’t have much cultural impact even on its own immediate surroundings. There might be a few college kids studying late at Papaccino’s or Southeast Grind, but there are no political flyers or radical meetings in the Woodstock neighborhood that I’ve ever noticed.

So what I’m saying is this is not Berkeley in the '60s. What happens at Reed stays at Reed, and it doesn’t actually happen to very many people, and it’s not really related to anything else going on in Oregon or even down the street.

OK, this probably deserves its own thread (since it isn’t Reed), but it seems to be cut from the same cloth: Play about late comedian is called off amid student protests.

I’m not even having to try hard to spot these parallels:

Hai Rui Dismissed from Office (Chinese: 海瑞罢官; pinyin: Hǎi Ruì bà guān; Wade–Giles: Hai3 Jui4 Pa4-kuan1) is a theatre play notable for its involvement in Chinese politics during the Cultural Revolution. Wu Han, who wrote the play, was a historian (and a municipal politician in Beijing) who focused on the Ming Dynasty. In 1959, Wu Han became interested in the life of Hai Rui, a Ming minister who was imprisoned for criticizing the emperor. Wu Han wrote several articles on his life and his fearless...