I’ve been asked to repair a transmitter used by a local Unitarian Universalist church to provide services to the hearing-impaired. It’s used for regular sunday services, music concerts, weddings, etc.

The base unit is a Telex SoundMate ST-200 and the telescoping antenna has snapped off. The unit is in a rolling rack which makes it pretty certain that if I just replace it with exactly the same antenna, it’ll get snapped off again in six months. So I’d like to replace it with a rubber duckie type antenna with the same characteristics. But I can’t find one online… my antenna-fu is weak, my ham license expired in the 1980s, so it’s hard for me to tell what will work.

The original antenna is a 1/4 wave telescoping chromed tube, 41 and 5/8 inches in length (the transmitter is claimed to use 72-76 Mhz, so that makes sense if speed of light equals frequency times wavelength). It was mounted on an old-fashioned fat threaded male UHF connector (PL259 style) which in turn was mounted on a right-angle adapter. I still have the right-angle adapter, and most of the antenna. 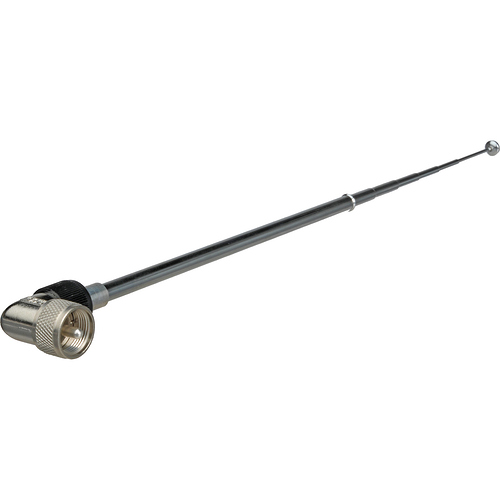 Telex_877960_TW_A_1_4_Wave_77193.jpg2500×2500 114 KB
Does anyone know of a good rubber-duckie style antenna I can use to replace this one? Failing that, does anyone have any tips on making one? I read the American Radio Relay League’s .PDF guide, but it’s for a different frequency and it calls for expensive tools I don’t have (I have a multimeter, and I can tell what 120VAC 60Hz feels like with my fingertips).

The other online references I’ve found (so far) also seem to assume I have tools and knowledge I lack.

Any and all advice gratefully accepted!

I’m not able to provide any help, but I’m certainly intrigued by the radio stuff–I’ve long wanted to get a ham radio license but have not ever taken the time to study the necessary stuff. That and math is somewhat close to being my kryptonite. Good luck!

Sounds like the fancy stuff is just needed to optimize the antenna…
Perhaps you can eyeball it by putting the transmitter at a distance where reception is marginal and then tweak the length/coils until you get the best apparent signal?

Is it possible that you have a local ham radio enthusiast club/group in the area who could offer that expertise?

We used to, back in the late 70s, but it died. All but two of the stores that catered to that crowd are gone, and the remaining two are staffed by surly teens and don’t have anything but CBs and police scanners for sale.

I’ve got a friend looking into that, though, to find out if any new groups have spawned more recently. I think you’re right, finding a ham club would be the most likely way to find somebody with the specialized tools. Keeping my fingers crossed!

Of course if I can just buy something off the shelf that will work, that’d be the optimum solution, so I could get the system back on-line for Saturday concert/Sunday services…

@shaddack would probably be able to tell you…

On page 7 is a rubber duckie antenna with the specs you described (not sure about the connector, though). As the product category is identical to your Telex SoundThingy it could be worth a try (even if the connector is not compatible a cable with two fitting connectors is probably procurable or made as a manageable DIY).

Have you mined Newark, digikey, mouser, mcm, and probably 50 other online electronics parts retailers? And if you hop on some radio enthusiast blogs, you can probably dig up their recs for radio parts stores.

@renke, thanks! I called Williams Sound, though, and that one has a weird screw-to-PCB connector that won’t work with the Telex transmitter. It’s also 75 ohms and I suspect the original is 50 (although I’m not actually certain of that).

@awjt, yes, I’ve been trawling the net a fair bit. The problem is mostly that this thing doesn’t use any modern connector, it’s using an antique UHF connector (it looks kinda like the termination connectors we used for 10b5 etherhose, if you remember back that far, only without the center shield bit.) The radio remote control guys have been very helpful, but again they are using tools and software that I don’t have.

BUT I FOUND ONE right here! Crow River Audio AN007. It’s not cheap, but it’s not blindingly expensive, either.

I knew you could!!! Believe it or not, most ancient-looking connectors are still in use. If you use those sites, you can give yourself a good lesson in cabology. I had to do this when I was looking for coax connectors to rig up my cell phone booster when I lived in the middle of nowhar.

Since you are back, calling @shaddack

do you think twice is enough or does he need yet another invitation?

I do believe that the the traditional summoning technique requires the beast’s name to be called out 3 times while gazing upon some odd bits of wire and electronic detritus.

I see I am a bit late to the party.

I’d suggest either going off the shelf for a rubber antenna (which was found already), or using the telescopic one (or even a length of wire cut to the right length) and a PVC pipe (check signal before and after in case the given blend of the material would attenuate too much) as a mechanical protection. Maybe use that flexible thin copper pipe used for HVAC instead of wire; holds shape, and when knocked it bends but can be straightened easily.

similar to most fables: the third prince wins the princess, one has to perform three tasks, …

Pvc ain’t a bad idea. Even if you had to perforate it to prevent attenuation it would still be light and strong.

the third prince wins the princess, one has to perform three tasks, …

Have you read Howl’s Moving Castle? It starts right out with a funny riff on that.

not yet, but it sounds like a fun read and I added the book to my buy+read list

I was thinking about using a notched pvc sleeve to uniformly spin 7’ of wire onto a rubber rod or piece of coax and then dip it in plasti-dip. (I actually do have an old solder-type connector of the correct kind, because I have a barn full of old junk like that.) But when I looked at the DIY how-tos, the guys were using tools I don’t have to measure the performance of the antenna and then tuning by clipping off tiny little bits of wire, or they were using expensive software to model the antenna and tuning it that way.

I’m going to go with the commercial product, 'cause I’m short on time, but it would have been fun to build one!

This topic was automatically closed after 458 days. New replies are no longer allowed.