This is a decent cheap antenna, but it really is meant for urban environments. Due to the size, it will work best on UHF stations – VHF takes a bigger antenna. However, most stations are UHF.

When in doubt, check this web site. Put in your address and it will tell you roughly how big of an antenna you need, and which direction to point it. 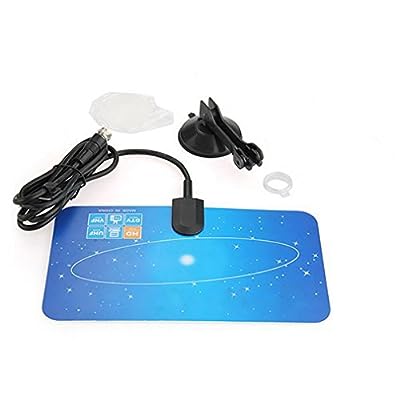 Or the knockoff, for 4 bucks?

Never mind that all TV Antennas are “HD”. When the switch was made to digital broadcast absolutely nothing changed about the Antenna technology. You could use your Grandfathers old rabbit ears to receive HD signals just fine.

These little antennas sometimes don’t pick up all those low power stations. Now most of those are foreign language and reliqious programing, but worth noting. As others have pointed out, all antannaes can receive HD or or more acturatly digital signals. But that is a pretty blue.

Ironically, the Spanish & religious stations are crystal clear with plain old rabbit ears but the major stations are spread out in different directions so I’m constantly having to adjust my antenna whenever I want to change channels.

I finally mounted one of these in my attic: 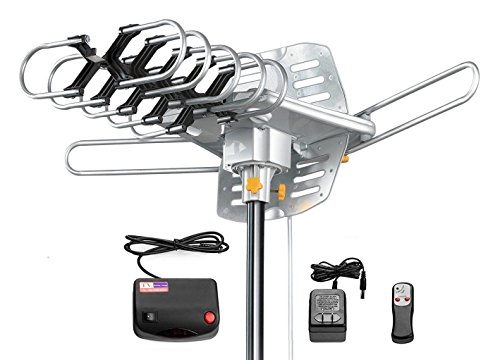 I wonder how many people with analog sets will buy these “hd” antennas and not realize they also need converter boxes?

Indeed, our old 1970s-era yagi in the attic works quite nicely with the HDHomerun box that feeds my MythTV system. Rule of thumb: if you could get crystal-clear analog TV (no snow or ghosts) back before the digital conversion, then you don’t need a new antenna for HD.

I’m waiting for Aereo round 2: the usb stick with an HD receiver, wifi and cloud-based video storage and streaming playback…

rabbit ears are best for VHF stations; low VHF in particular. When hdtv was introduced, most of the vhf band was already occupied by ntsc stations, so to recieve the digital signals, most people needed uhf antennas–not rabbit ears. Depending on when your grandpa watched TV, his old antenna might not have been even designed with anything other than VHF in mind. in “rabbit ear” sets, the wire loop was the UHF antenna, and it was a farely ineffiecient one.

Thus, if consumers wanted to watch HDTV, they needed a UHF antenna, and so to cash in on this market some manufacturers started to sell variations on UHF designs as good for recieving the new signals.

Since HDTV snow is unpleasent to watch, there was a certain risk to selling badly performing antennas as Digital, but such is marketing. Zenith made an newly designed hdtv antenna that iirc did fairly well at resolving “multipath” which was a new problem associated with recieving, and descriminating amongst atsc signals.

Of course, after ntsc was phased out, some stations did reclaim their old vhf assignments, and digital uhf only antennas are less useful.

We have this $7 antenna and it works just fine for both VHF and UHF stations. I was shocked the first time I plugged it into my TV to discover that there were more than 70 broadcast stations available in NYC.

For a more geeky and in depth analysis of OTA broadcasts see http://www.tvfool.com/ It can generate radar plots for your specific location and antenna height,

Who is this Ivan Hernandez and why is he pitching cheap junk with an affiliate link? Is he related to the product?

Honestly guys…I don’t mind hitting the BBers affiliate links since they provide the content, and even the cool tools posts have occasional (very occasional) value. But this is the second time I’ve seen plastic crap pushed by a random byline and no context. Not cool.

The antenna itself? I returned mine because it had worse reception than other inside antennas and the suction cup was worthless. The AmazonBasics indoor antenna was the best out of the 6 different models I tried.

ETA: The last piece of cheap crap referenced was a $20 ounce of plastic that would make a “phone mount”.

Here’s what that site says about my location, even if I put up a 30’ antenna:

"No Stations were predicted for this address

Due to factors such as terrain and distance to broadcasting towers, signal strength calculations have predicted no television stations may be reliably received at this location."

But using the other site that @LagerVsAle provided, I get empirically correct results… 2 VHF stations easily receivable, 3 UHF if I use a roof-mount antenna and the weather’s good.

I am in a declivity cut by a stream, so I can only get stations with antennae lined up just right. People around me get dozens of stations easily, because they are not down here in the holler.

I have a Tivo Series 3, which has a built-in digital converter. When I cut the cord last month I dug into the black hole of extra cables we all have lying around, found a short piece of coax, and stripped about 8 inches off one end, all the way down to the copper. Free, and does a damn fine job.

Personally, I much prefer HiDef video to HD.

Yeah–people who honestly advocate for “plain ole” or “grandpa’s old” or “some allegedly honest variation on” rabbit ears are just lucky. I live out in the burbs, there’s a tall building nearby, and the grading puts my condo in a bit of a hollow, Sometimes I can get a clean signal, other times I can’t. I put more effort into aligning things when streaming hadn’t yet been invented, but at this point, it’s just a hassle. I use a double bow tie antenna.

this. when analog broadcast was still the standard but special events were simulcast in HD, I watched the super bowl on an HDTV that the host purchased specifically for his super bowl party. for an antenna, he inserted a paperclip into the coax input. that’s it.

I personally used a coax that I touched to an anglepoise lamp for a while. now I’ve got some bare wire home-made rabbit ears outside and rigged them through the window and onto a coax using like $5 of antenna doo-dads you can buy at Home Depot etc.

I will be reading the links ITT with great interest since there’s at least one weakly-broadcast channel I can’t get since I live in a low-point with big trees all around. but most channels come in perfectly despite that I’m using absolute bullshit rigged to my TV.

If you don’t mind me asking, could you punch in your address into one of the antenna web programs

and reveal the colors (white, purple, etc) of your local stations?