I think I saw Big Apple when I was about eight, which was a lot more than 20 years ago.

Looks like it could possibly be revived, if someone buys its assets in a bankruptcy auction: 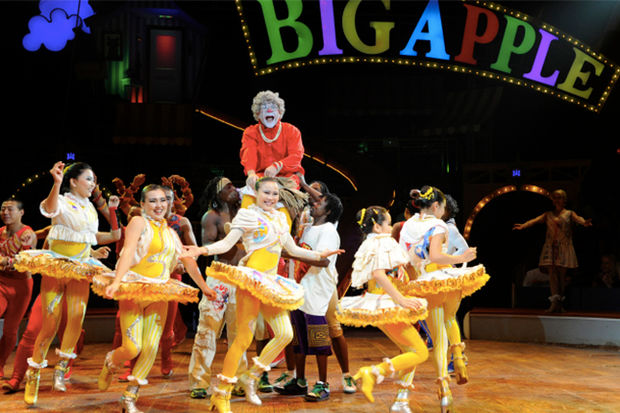 The Big Apple Circus Could Be Yours for Just $500K

The bankrupt nonprofit has put all its assets — from its tents to its trademark — up for auction.

I wouldn’t hold your breath. It was only profitable when the horse act was the owner’s wife. Now that they’re retired, it’ll literally take a pair of outlandishly talented performers to fill their shoes. They handed it off to the other co-founder who couldn’t make it work, I don’t have a lot of faith in anyone else pulling it off.

They just sold all their land upstate, the tents and the trailers are about the only tangible assets that are left.

It’s kind of sad about Big Apple Circus, also. I very much enjoyed the series documentary from a few years back.

With Barry Lubin, Paul Binder. In a world that offers a dizzying array of amusements and entertainments, there is none quite so enduring or so universal as the circus. Now, over the course of six dramatic and mesmerizing hours, Show of Force will...

I’m pretty sure I’ve linked this before, but for a while now I’ve been reading the blog of this woman who plays trombone for the Ringling Bros. circus. She writes about performances, life on the train/road, the animals, the acts, etc… Great reading if you’re at all interested in what behind-the-scenes of the circus is like.

It was, as they say, very heavily edited, especially that first episode. I spent the summer of 2001 with the Big Apple and asked friends who were still there at the time of the documentary. They said I should say “documentary” when I ever talked about it.

I’ll agree that there has been a resurgence, but I think we’ll disagree on there being some kind of worldwide revival. I think it’s great that Australia is running some great stuff down there, we kind of do the same thing at Ren Fairs up here, but it’s less about classic circus techniques and more fire eating and slackline. Australia has, quite frankly, always been a little further ahead when it comes to treating artists with respect and been able to recognize what they bring to the universe, whether it’s comedy festivals or whatever.

That said, I literally see no place for the red and blue tours of Barnum to go, especially with the various acts from Big Apple also looking for a home. That is a lot of long-term performers fighting over what I might nicely say “second tier big tops” with smaller crowds and hazier safety records. Some are going to be able to go overseas, especially the smaller acts like juggling pairs or some tumblers, but the animal acts, anyone that spent a few hundred grand on a mobile home for touring, or has a large custom touring thing is basically stuck in North America for the next few years where the jobs just withered away.

I sincerely hope that the Bindlestiffs or someone like them can grab as many up, but I’m also betting that those same producers are relishing the state of the hiring market right now and thinking up ways to rework some existing contracts to dump talent as soon as they can, sending even more waves through the system.

BTW, this is one of the better modern Oz circus folks:

These guys are pretty spectacular, too: ‘Festival-goers were left speechless when the event’s main attraction, the Pyrophone Juggernaut, lit up the night sky with a spectacular musical fire show.’ MELBOURNE LEADER This is outdoor theatre at its wildest, standing 10m high, the Pyrophone is...

There’s an elaborate diorama very much like that at the Ringling Museum in Sarasota, Florida, which has a lot about the history of the circus and an extensive art collection.

Reading a lot of Bradbury in my youth I always wondered if the circuses I’d been to were really that different from the ones he wrote about or if he romanticized them. I’m also really sorry that the RBBB just got its first female ringmaster only to close so soon afterward.

This topic was automatically closed after 33 days. New replies are no longer allowed.