Why would anyone at CNN give a damn about him selling Mythbusters T-shirts? And I doubt anyone at Discovery cares much either, or they would have kept the trademark. As revenge goes, this seems unlikely to have any effect.

Yeah, if the trademark was abandoned, it means they already figured that it wasn’t worth anything to them. But yeah, “guy using trademark Discovery wrote off as worthless” isn’t quite as good.

If he makes over $1000 with it good on him, but yeah, I don’t think Discovery cares

I definitely don’t know anything about what the rates are to license a video, a cursory search gives me a broad range of $500-2000. Seems like the money CNN offered might’ve been reasonable, though i presume the maker’s bone to pick was not being credited. That said buying Mythbusters trademark seems like a weird way to go about getting even.

I’m genuinely surprised that Adam Savage didn’t already snatch up the rights, especially if they could be had for $1000…

Also, did CNN actually repost his video or did they link/embed to his public YouTube video? If they reposted was it the entire video, or a clip used in reporting, which is very much fair use?

It depends on the terms. $1000 to exhibit the video once is pretty reasonable. It’d be very unreasonable to assume exhibition rights in perpetuity for $1000. Exhibition rights of any sort still generally require accrediting as well (“Video courtesy of…” in fine print at the bottom)

For some framework here, a typical YouTube video sponsorship (“This video brought to you by Home Depot”) for his audience size ranges from $20k-50k.

At around 1:50, he appears to use robotic legs from a the Spider Tanks developed by Jamie Mantzel, a Youtuber who is criminally under-watched (personally, I think* the Jamie “deserves” a Werner Herzog doc…) Even if it’s not a Jamie original, but some derivative toy he’s using, as a fellow traveler of weird inventor youtube, couldn’t hurt to drop one of those “big account helps out small account” shouts. 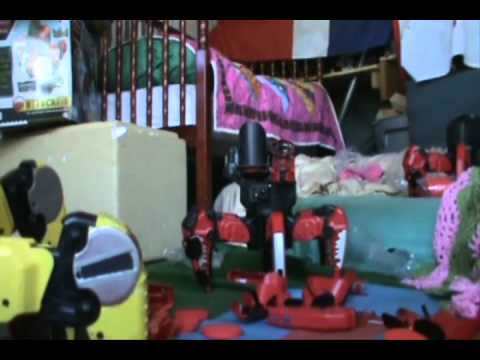 *have imagined off and on for years…

Mythbusters was a very popular show. I am SHOCKED they weren’t selling merch for it still.

Even a fairly generous offer starts to look like an insult when it’s ‘retroactive’ and forced by bad PR after just assuming that little people who aren’t incumbent media companies are beneath engagement.

I wouldn’t be surprised if there’s something in some ToS somewhere that makes uncredited and unauthorized use of bits of youtube on TV not legally grounds for a copyright infringement action; but in terms of moral sentiments it’s pretty piratical and especially obnoxious since its by an outfit that likely takers a very pious interest in its own status as a copyright holder rather than just a random viewer.

If it had been offered ahead of time it would have at least been a reasonable start to the negotiation; but after the fact you’d need an offer that looks overtly conciliatory to not go over badly.

He claims in the video that they didn’t link to his video. The fact that they offered him $1,000 seems to suggest they didn’t embed, either, but who knows.

There’s a lot of very common misrepresentation of “fair use” here, possibly on the part of CNN, too, but I’m not sure about that part. Maybe they knew and didn’t care. Anyway, just because CNN is a news organization doesn’t mean that they can use anyone else’s content and it’s automatically “fair use.” There’s a 4 factor analysis that goes into determining fair use. The most important of these factors is that the use is transformative. Using his example of doing a news broadcast from inside a movie theater while Black Adam plays in the background, that is clearly highly transformative. The news broadcast is about the movie Black Adam, but it doesn’t serve the same purpose as the movie itself. Someone can’t watch the news report instead of buying a ticket to go see the movie. So, if all CNN did was copy his video and re-upload it to their own platform, that’s not transformative at all. It’s not fair use. They should have sought his permission first. And I suspect they knew this, which is why they offered him $1,000 when he complained. Anyway, my point is that his skit where he makes himself a news organization so he can avoid copyright through fair use is just silly and a complete misrepresentation of what fair use is. Maybe that was his point.

As far as buying the mythbuster’s trademark…yeah if it was available to buy, clearly CNN’s parent corporation doesn’t care about that. He also needs to be very careful. Sometimes those trademarks for merchandising are very specific, limited to a single logo design. I looked up the trademark for Disenchanted recently, and there’s about a dozen different trademarks for various designs, some active and some abandoned.

I was talking about a short clip of it in a news report which is definitely fair use. Obv if they showed too much or all of it it would fail the test. I have just heard so many people squeak about their copyrights bring violated because some linked to their YouTube that I feel I have to ask.

Right, but he says they just reposted his entire video. I didn’t try to verify if that was true. I may later. Right now I’m sitting in a hospital cafeteria typing this on my phone lol.

Oh no! I hope that a hospital cafeteria is a normal part of your daily environment! If not I hope that everything is okay!

I have not looked into it either, but the claim seems weird on the surface since CNN if nothing else understands copyright law

It is not, but everything is fine. My mother was having a cardiac catheterization to determine if she had a blockage, but she doesn’t. I’m just waiting for her to be ready to go home.

Stories like this make me feel all warm and fuzzy.