Russian spaceship is spinning out of control in orbit

There’s still quite some chance they manage to get the thing under control. The history of aerospace is littered with near misses (and non-misses).

A pretty good page-turner book about the topic is here: 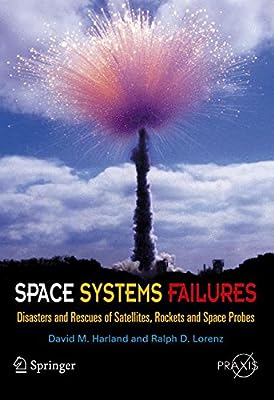 The very first book on space systems failures written from an engineering perspective. Focuses on the causes of the failures and discusses how the engineering knowledge base has been enhanced by the l ...

That’s why they invented the term “Rapid unplanned disassembly”

I just love that I live in a time where this is even a thing:

No flying cars yet, but I’ll take what I can get.

It’s spinning so fast the alphabet is all screwed up.

On Russian side of International Space Station, we furnish all amenities, from A to backwards-R.

In Soviet space, alpha bets YOU!

Now I’m wondering if there’s even theoretically a way to stop a spaceship from tumbling without damaging it, if there’s no one on board and you can’t remotely access its thrusters. If it’s a very slow tumble you could have someone go EVA, grab on, and handle things manually; if it’s only rotating around a single axis, you could have another ship match orbits, match spin, then dock with it somehow and use their own thrusters to despin both ships. But in the general case, I can’t think of anything that’s not pure science fiction.

If a properly working ship can get in the vicinity of the disabled one, they might be able to fire their RCS thrusters at the disabled ship and slow it’s spin/tumble down if the geometry is right. It’d probably need the working ship to get really close though.

Watching Gravity whilst actually in space might be more terrifying than IMAX.

Why the fuck did he do that?

Dr Forrester doesn’t give them a choice. Plus, he used those special parts to build his robot friends.

The Soviets really pioneered automation in aerospace while the US was all about having a man in the can with thousands of expensive flight hours of hand eye coordination. In the early 80s the Soviets were also landing their VTOL fighters hands off and with automated eject off of their hybrid missile cruiser/carriers.

This nav problem has happened before, the bigger problem is that the US, with all of it’s problems, is beholden to and paying a backsliding second world failed state with low national self esteem for manned access to space.

Argh, the errors in orbital mechanics!!
She didn’t have enough Δv for any of that crap!!!

Also, damnit I wanna go to space too!!! Even if I have to watch Gravity again.

She didn’t have enough Δv for any of that crap!!!

*turns back to KSP 1.0, cursing the gods of inattentive fuel usage*

Can we get an “Unmanned” in that headline? Would have saved me a heart in throat moment.

This nav problem has happened before, the bigger problem is that the US, with all of it’s problems, is beholden to and paying a backsliding second world failed state with low national self esteem for manned access to space.

Whoo. That wasn’t necessary, was it?

More than 140 flights have been launched, all except Progress M-12M have reached their destinations, with no injuries or loss of life after launch. The Progress M-24 spacecraft collided with Mir during a failed docking attempt in 1994, and Progress M-34 caused serious damage to the Spektr module when it drifted off course during a docking test in 1997.

It works most of the time. When it doesn’t work, it does’t take lives. No need to mock the entire nation because something in a complex gadget has not worked properly.