School pretends boy's leaf is marijuana, suspends him for a year

When “crazy” comes to town, things get weird.

I’d be suing with extreme prejudice.

This goes beyond zero tolerance to… negative tolerance?

Proof positive again: You expect less from “zero tolerance” and you get it!

Out of an abundance of caution, we opted to screw this innocent kid.

If it was poison oak - they’d send him to Gitmo…

Well, at least being suspended for so long, he’ll have plenty of time to not get into drugs.

Meanwhile, I’m concerned about a serious problem. The administration has been passing around an alcohol-lookalike. It’s sold in innocuous bottles and in fact comes out of every water fountain.

Since the school officials are only pretending to have brains someone should suspend them for a year or two.

It’s a little bit relevant that the boy was going around school telling people it was marijuana. I’m not saying he should have been suspended, much less for a year, but schools don’t have much of a sense of humor about kids pretending to have pot.

You win the thread, sir.

I can understand how the adults involved in suspending and prosecuting him thought the “leaf” was marijuana. Obviously they’re all on something.

The “leaf” is actually a book about Leif Ericson, but hey … made-up-on-the-fly-rules are rules.

schools don’t have much of a sense of humor about kids pretending to have pot.

I agree fundamentally with what you’ve said (although the school’s story about the boy going around telling people the leaf was marijuana seems to be inconsistent).

But it goes well beyond having no sense of humor for the school to impose identical penalties for the possession of either real or imaginary drugs.

It’s not like he declared he had a bomb, or a gun, either of which could be construed as an implied threat to others.

Whether or not his declaration of possession was factual or imaginary, what harm could he do to anyone else with a single marijuana leaf?

Well, you’re assuming the explanation of the school is true, which I wouldn’t do. It’s unlikely that the kid was bragging about having pot to an adult, so I’d guess that the “source” was some other kid, or a kid who heard it from another kid. So now they’ve got a game of telephone going on where the first kid says "hey does this leaf look like marijuana?"and by the time the administration hears it, they’ve got the kid pushing kilos in the school bathroom.

I get why “simulated drugs” are important to prohibit in a school setting - they could actually be more dangerous than the real thing. But FFS if the kid is 11 years old and just has a leaf on him, sit him down and tell him 1) it’s not marijuana and 2) telling people it is marijuana could get him (and his dad/mom) in a lot of trouble, even if it’s not real. Then let the kid go, lesson learned.

Yeah, somehow suspending an 11-year-old for a year for not having marijuana doesn’t build up the credibility of the officials who did it. Kind of makes them seem like the sort of people who would say or do anything to justify the conclusion they already came to.

Read the Roanoke Times article. The family found out only recently that the leaf tested negative, kid’s going back to (a different) school today after 6 months out (presumably, not 100% clear), and the family is suing now. 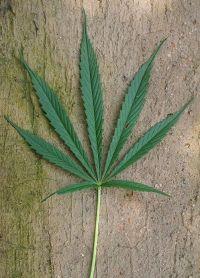 At first blush it sounds like an open-and-shut school disciplinary matter in a zero-tolerance age:

I would like to try some of whatever the administration is on, though it would probably be prudent to have friends watch me, given that whatever they are on, has skewed their judgement to the point of mistaking a marijuana leaf for maple, &/ or the kid’s imagination.
On second thought, something like that is bound to cause massive nerve damage…(make you see cartoons in front of your face, & other horrors)…

We have a Japanese maple that has smallish leaves that look very much like marijuana. Not if you know anything about, ya know, biology and stuff, but to an 11 year old it could be fun to pretend. Just like they pretend to be cops n robbers, army men (oh gads, no… not guns!!!) have light saber duels or hurl actual spheroids at one another with the possibility of them being actually physically injured!!!

Mr waetherman is being entirely too sensible. What’s wrong with you mang?

I hope the suit costs those morans their jobs. Talk about poor judgement.