Sorry guys but unless the FBI (lol!) uncovers that the Ruskies really did hack the e voting machine totals in WI, MI and PA

If they did, would any Trump supporters believe them?

If they did, would any Trump supporters believe them?

If there’s one thing this election proved, it’s that actual facts are meaningless to bullies.

And that shouting total insanity loudly is more believable than stating facts calmly.

I think “disingenuous” is the word you’re looking for

I vaguely remember it. That’s why we celebrate Black Friday, right?

I’d just like to see a decent number of them go faithless in protest. Not holding out hope that they’ll be heroes.

I’ll stick with ridiculous. There are plenty of true believers that are unaware of the absurdity of their political views. More than plenty.

Even her supporters largely feel that overturning the projected electoral count right now would be utter chaos and result in a discredited Democratic President and possible actual guns-a-blazin’ fights.

Vestigial processes within the USG are interesting to me and I remain surprised that this one has stuck around as long as it has…well, not really, given that the electors are just another set of awardees in the political process to be herded and placed just so when needed. But still, a distinct remnant of the past.

A few years ago I caught a brief segment on CSPAN from [X] about the USG and whether the size of the electoral pool was large enough to handle a nation of 320+ million people. 50 Jackasses and 435 Jackholes plus two or so other Fucknozzles seems a rather paltry infrastructure for handling the concerns and ideas of a rather large and [caring,creative,unruly,talkative,thoughtful,thoughtless] people.

My brain doesn’t grok well enough at either micro or macro scale to understand how the US political system might or should change to encompass the ensuing population change as a starter, much less the implications of altering/updating the voting system–but clearly, shit is broke, shit needs fixing.

Yeah, there’s that, but I was thinking more that even the members of the electoral college who can’t stomach voting for him won’t stay in a position to vote otherwise.

I vaguely remember it. That’s why we celebrate Black Friday, right?

we need to be fighting Howard Dean and his ilk

I think Dean’s parable from Man of the People to Enemy of the People should tell us/you something. Namely, that the whole point of representative democracy is this backroom dealmaking and horse-trading. You/we elect people to horse-trade in our stead, they are supposed to be two-faced conniving sons of bitches. The real problem is that this sausage-making business is supposed to get us somewhere that is not here, and this is not happening: we keep spinning a hamster wheel of deregulated capitalism, with no grand plan or horizon in sight beyond “we’ll just try to make you suffer a little bit less”. We need a plan that goes beyond selecting the right face for this or that job, something that people can agree with, and then we can unleash an army of bastards to get us there by hook or by crook. Candidate-first strategies must die.

We need a plan that goes beyond selecting the right face for this or that job, something that people can agree with

I love that the same actor – Rufus Sewell – who played Alexander Hamilton in that brilliant HBO series John Adams also plays Obergruppenfuhrer Smith in The Man in the High Castle.

Except Interstate Compacts have to be approved by Congress and you aren’t going to get that from the Senate as small states lose their relative advantage.

Yep, that too. But in the short term we can also hope for the results to be overturned, or him to be impeached while the other stuff gets organized (and before he/they are able to put in place laws that disallow such organization).

The only states even remotely likely to pass such a measure already trend blue. All the recent winners of the electoral vote who lost the popular vote are Republicans. Why would the Southern and sparsely-populated Plains and Western states give up their unfair advantage? That’d be like voluntarily eschewing the gerrymandering that’s literally the only thing keeping them anywhere near controlling the House.

Shitposting trolls crowing about being in the majority are provably wrong. Not that that’s going to stop them.

We’ve already seen one member who said he could not, in conscience, vote for tRump resign his position instead.

This struck me as really silly…that guy literally divested himself of his duty as an elector. No one says he had to give his vote to Clinton. He could have abstained, made an actual statement about why he couldn’t do it, or even voted for Tom Brady for all it mattered…just not Trump.

“I can’t in good conscience do something bad, so I’ll let someone else do it…problem solved!”

Wow. If even Schoolhouse Rock can’t make a case for something… 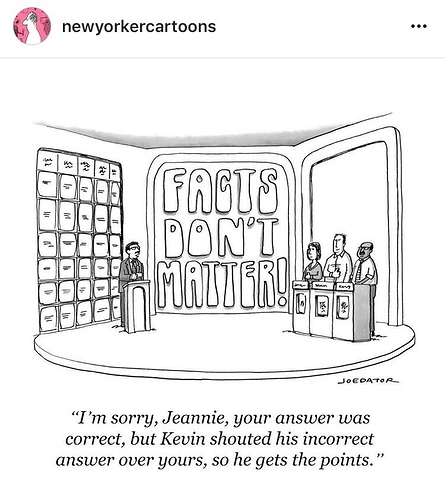