2017: All plastic on the planet has been devoured. Bacterium realizes that meat is even more delicious.

Science means we don’t need to change our wasteful lifestyles!

Christopher Magnus Howard "Kit" Pedler (11 June 1927 – 27 May 1981) was a British medical scientist, parapsychologist and science fiction author. He was the head of the electron microscopy department at the Institute of Ophthalmology, University of London, where he published a number of papers. Pedler's first television contribution was for the BBC programme Tomorrow's World.

In the mid-1960s, Pedler became the unofficial scientific adviser to the Doctor Who production team.[2] Hired by Innes Lloyd to inject more hard science into the stories, Pedler formed a particular writing partnership with Gerry Davis, the programme’s story editor. Their interest in the problems of science changing and endangering human life led them to create the Cybermen.[3]

Pedler wrote three scripts for Doctor Who: The Tenth Planet (with Gerry Davis),[4] The Moonbase and The Tomb of the Cybermen. He also submitted the story outlines that became The War Machines, The Wheel in Space and The Invasion.

Pedler and Davis devised and co-wrote Doomwatch, a British science fiction television programme produced by the BBC. The programme which ran on BBC One for three seasons from 1970 to 1972 (37 50-minute episodes plus one unshown) covered a government department that worked to combat technological and environmental disasters. Pedler and Davis contributed to only the first two series.

I don’t think this is good news, either. Plastic in landfills is inert and sequesters carbon, in a way. Bacteria turn it into greenhouse gas. How is that a good thing?

Didn’t the Andromeda Strain turn rubber into dust? IIRC it ate through a pilots 02 mask hose.

Also, he notes, it might be possible to engineer the enzymes to make them faster and more practical.

I for one welcome our new bacteria overlords.

I wonder what they do with the chlorine atom. Doesn’t plastic always have a chlorine atom? And that’s pretty toxic, no matter what you attach it to.

No, there are a lot of plastics without chlorine. There are chlorinated polymers, like polyvinyl chloride, but PET isn’t one of them.

I just hope that bacteria eats my two liter Coke bottle after I drink it, not before.

Not always. Polyvinyl chloride has lots, but I can’t see why the polyethylene terephthalate mentioned here would. In any case, though, there’s a very simple way to dispose of chlorine atoms: oxidize them to chloride ions, which are a normal part of living things. In theory you can even get energy for doing so.

Bacterium realizes that meat is even more delicious.

Bacterium would be in competition with all the other bacteria that already eat meat, and since even they can’t always get around its defenses, probably be left doing the aerobic degradation it started with.

Seriously, I understand the inclination to cynicism, but there are serious problems with environmental plastics, not just in landfills but in the ocean. And since they come about because nothing breaks plastics down, in the long run it’s pretty clear the only way they will be reduced is once things develop the ability to do so. This isn’t without problems – for instance there’s concern over releasing toxins soaked up by microparticles – but in some sense they’re the problems we’ve already queued up.

So I’d hold finding that some living things have developed the ability to degrade our wastes to be generally positive. As to worrying about everything being digested, well, we already know there are microbes that degrade wood and you don’t even need them to degrade metal. And we still make things from those. Just keep them intact, where possible dry, and in some cases treated. I guess I can see problems from the last, but you know, it’s basically because it would bring plastics back to what they are now.

Um, No. PVC is the big offender here, but I don’t recall other thermoplastics that have chlorine. There’s a reason it needs to be separated if waste is to be burned, along with organic material (contains phosphor). I guess other special use polymers containing halogens exist, but they aren’t a significant part of the stuff filling landfills.

And I see was too slow

Finally, something to eat all the sweaters made from recycled PVC bottles.

I don’t think the bacteria cares if the plastic is waste or not.

There was a fungus discovered in 2012 that could break down polyurethane, and it has yet to apparently change the world. 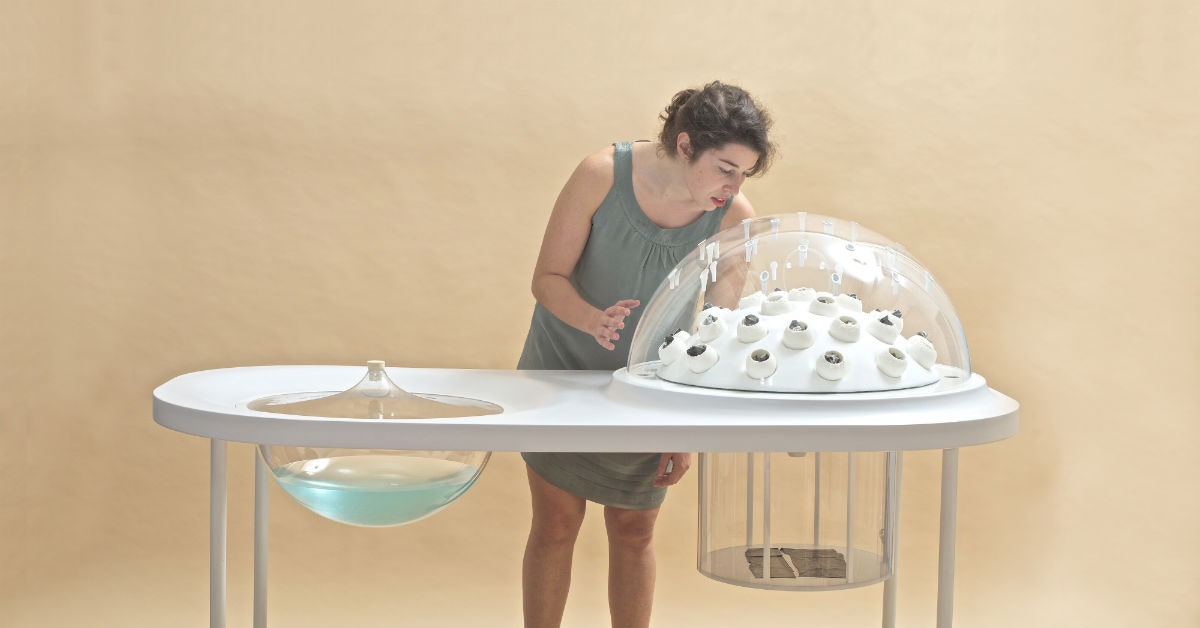 A Mini Farm That Produces Food From Plastic-Eating Mushrooms

That’s right, you can eat mushrooms that eat plastic.

Isn’t this what collapsed the City Builder civilization on the Ringworld?

We also have the technology to make oil from just about any organic matter. But it can’t compete with the free stuff from the ground.

I wonder what they do with the chlorine atom. Doesn’t plastic always have a chlorine atom? And that’s pretty toxic, no matter what you attach it to.

Your stomach begs to differ on that last point. As does table salt. As does your municipal water supply. And on and on and on and on. It’s an incredibly abundant element to be so toxic that you can’t attach it to anything without making it toxic. But not all plastics have chlorine anyway. It depends on the polymerizing reaction that creates it, and the kind of plastic you want. PVC happens to be convenient in a sense because that chlorine atom in the monomer imparts specific properties. Other plastics don’t need the chlorine atom to do what they do.

Only REAL plastics have Chlorine atoms.