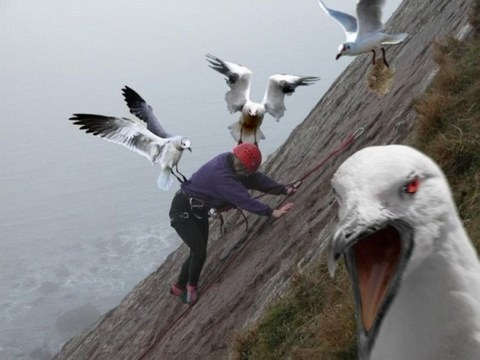 Yes, and I can’t imagine why a robotic one would be any better.

Give up, Mike! Please, for all our sakes, give up.

To the seagulls it probably looked as friendly as this truck in Mad Max II movie.

No idea why the loud whirring and buzzing of RC servos and gears would scare off a flock of naturally skittish birds…no clue at all!

You may laugh, but thanks to people like Mike Evans we’ll be mining unobtanium in just over a century.

Kyle Geese (to Sarah Condor): “The 600 series had synthetic feathers. We spotted them easy, but these are new. They look birdlike… fishy stench, white shit, everything.”

…that they cant eat.

There is overlap in the Venn diagram showing ‘dislike’ and ‘frightened by,’ but it they just look frightened by the rc car, more than just not liking it.

Herring Gulls are the worst. I grew up on the coast. Bastards, they are.

soldier, you win the internet today

Seriously, no one is going to note that this flock of seagulls left the area as quickly as possible. That they put a significant amount of distance between themselves and the intruders. Twelve hours and no one is going for the low-hanging fruit?

no one is going for the low-hanging fruit?

Point of order: seagulls don’t exist. There is absolutely no such thing as a ‘seagull’. They’re GULLS.

Lesser Black-Backed are FAR more aggressive than Herring gulls. In a fight over scraps, a herring gull will nearly always emerge the loser. I lost most of a damn fine chippie tea to one particularly evil shit. Almost lost most of a finger, too - took a whacking chunk out my left index finger. Scared and Scarred in Scarborough.

(Admittedly I was warned; the shop did have a sign outside reading ‘Where Sea-Gulls Dare’).

I’m sure you do mean herring, but people often confuse 'em, LB-B are charcoal, rather than a sort of steel grey.

Hitchcock’s ‘The Birds’ would have infinitely more terrifying had they been LBBGs. Why are Ravens supposed to be scary - I LIKE Ravens, knew a lass who had a pet one (she had a form of Goth OCD, obsessed doesn’t nearly cover it). Haven’t seen her in ages, last I heard she was looking for an owl.

I’ve taken ages over this, but it still seems nitpicky. Sorry😔

Oh, no, I know what a herring gull looks like. We had the buggers nesting on our roof in an attic flat. They used to get in through a loose slate and pick on the dog.

Interesting. We have both herring gulls and LBBGs here in Finland too. But here LBBGs are quite rare and I think they are more timid than others. The common gulls are the most common gull here.

In most places the gulls don’t dare to approach people (usually they will keep around 10 meters distance) but there are certain places where they have learned to steal food aggressively. But in those places everyone except the new tourists will now that gulls are looking for an easy meal.

We have also greater black backed gulls but they don’t usually approach people at all. I guess they are too heavy to make any successful food thefts.

BTW the GBBG is “merilokki” in Finnish which would mean seagull in English.

Or just go by the scientific name, and forgo the use of common names altogether.

(Admittedly I was warned; the shop did have a sign outside reading ‘Where Sea-Gulls Dare’).

Ha! There’s no such thing!