Demonstrating that there’s always someone willing to make a bad thing worse, there are self-help gurus who lead their followers into darkness… 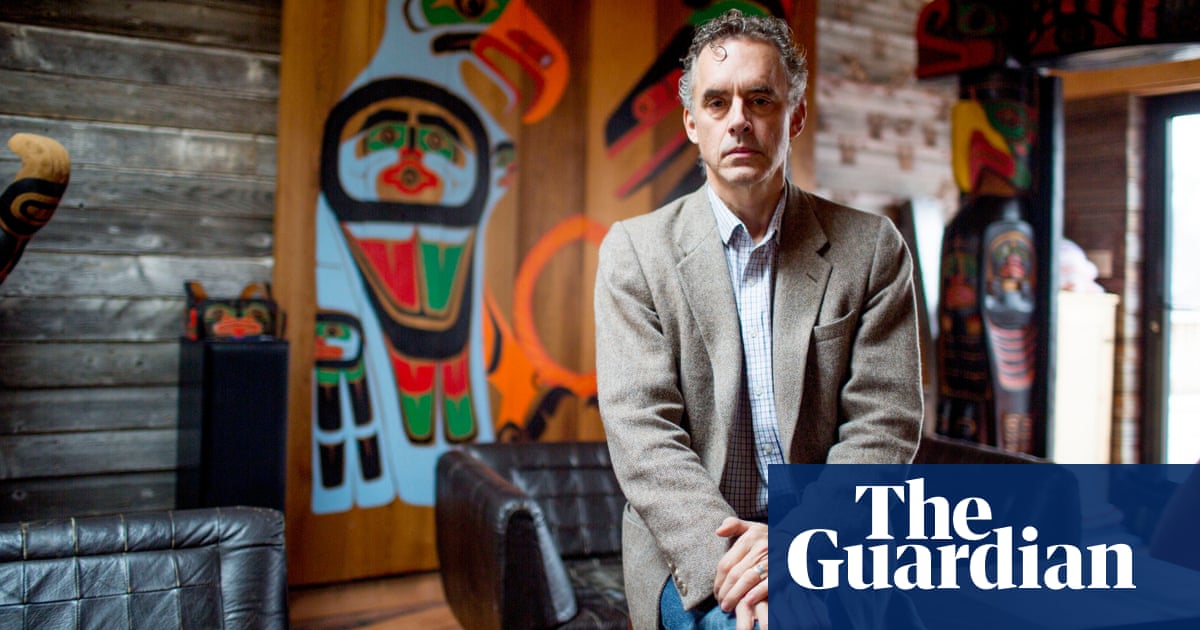 12 Rules for Life by Jordan B Peterson review – a self-help book from a...

The psychologist and internet celebrity with contentious views on gender, political correctness, good and evil, offers hectoring advice on how to live

… or who help create monsters …

… or who, not satisfied with being able to re-package shop-worn bromides any well-adjusted college freshman already understands, decide to throw a hearty dash of woo into their sh*t salad:

The Staggering Bullshit of ‘The Secret’

Perhaps books like The Secret act as life preservers for people who are in such a dark and miserable place that they feel as though they’re constantly drowning. But the point of a life preserver is…

The self-help industry seems to be a particularly American phenomenon. I really wonder how well this BS translates overseas and what the homegrown self-help garbage looks like in other countries.

These books always make me think of the addition a former coworker wanted to make to the genre, “The Seven Habits of Effectively High People”. It would be about the behavior of people who, though not necessarily stoned out of their gourds, might as well be, given what they do and say.

I consider The Secret to be pretty toxic and victim blame-y. To this day I have multiple friends/loved ones who post very positive things on social media, and when they do so, I know they are in a dark place. This Pink Cloud-ing terrifies me.

I understand how some of the concepts may help certain people, such as “Put all of your efforts behind one goal” but it’s really pretty simple and the rest of the woo just hurts everybody.

Starving kid aren’t starving because they don’t want the food hard enough. I once used this argument on an adherent of The Secret, and they said that those kids are in such a dark place that they just can’t vibrate on the right frequency to attract the food.

they just can’t vibrate on the right frequency to attract the food.

What the actual fuck…
Nope, just can’t. I once came very close to an assault charge when a pastor came into my ICU to tell a child fighting for her life that she had DKA because she “didn’t trust God enough to heal her.” She had stopped taking her insulin on his advice, and now he was blaming her for getting sick. This might be worse. “They wouldn’t be starving if they could just vibrate right. It has nothing to do with those preventing food from being provided!” I would love a chance to make these assholes vibrate. See what they would attract, besides flies.

they said that those kids are in such a dark place that they just can’t vibrate on the right frequency to attract the food.

It’s one small step removed from $cientology. I’ll bet anyone seen carrying that garbage book was prime recruiting/“personality test” material for the Cult of Elron.

OTOH, these books make great gifts for people you don’t like but are forced to pretend you do.

If the first line in a self-help book isn’t “This worked for me but it might not work for you because you aren’t me” then I tend to throw it violently against the wall. There are a lot of dents in the wall now.

I used to work in publishing and worked on a lot of self-help books . . . and hated every minute of it. But I was young and in lots of debt and needed the paycheck. And then this happened:

A new podcast called Guru examines what happened at a 'Spiritual Warrior' retreat near Sedona, Arizona after people spent about two hours in a so-called sweat lodge.

Three people died because of this asshole and I was working on his next book. The publisher put the book on indefinite hiatus, but I quit publishing soon after and spent the next four years teaching in an attempt to cleanse my soul.

This is so on point. My wife’s boss is a horrifically bad manager. Like awful people skills, and terrible decision making. She reads every self help book on business there is, and recommends everyone else do that. It clearly is doing nothing but putting money in the pockets of the authors.

When I started writing everyone told me I had to have Scrivener. I tried it. It blows for my process. I work fine with MS Word, and a document here or there for notes and outlines. I can’t stand Scrivener. I actually finished a book only after I dumped it.

There is a big range from Marie Kondo to Erhard Seminars Training, though. While I think everyone should know to throw their shit out every once in a while, stuff like Tidying Up or Getting Stuff Done etc. seems relatively harmless and serves mostly as a kind of self pep-talk.

Wow, where to begin. First off, yes the profitability of the genre leads to junk - like anything else. I believe Mr. Zitron may be missing the forest for the trees. For example, the reason one reads more than one self-help or personal development book is to look at an issue from multiple perspectives. The savvy reader will take away and implement what’s relevant to them. The savvy leader will internalize multiple paths to success so they can support and guide others who are - surprise - different from them. Can a leader do it without books? Certainly. Steve Jobs was famous for his brutally effective leadership style. Most of us are not Steve Jobs, Oprah Winfrey, Warren Buffet or Sheila Johnson. Studying what works is helpful. Studying what didn’t work would also be helpful, but fewer books are written about that. I will acknowledge that one danger is “analysis paralysis,” or failing to implement a strategy because you’re reading too many ways to win. A very common thread I see with successful people is taking action and failing their way to success. Getting out there and trying. As far as success coming from privilege and luck, I agree it certainly can and often does. Many successful people who worked hard and suffered eventually achieved because that work was recognized at the right time. Even Viktor Frankl got lucky. Luck favors the prepared.

This is the only self help book that has ever really worked for me:

There is a big range from Marie Kondo to Erhard Seminars Training, though. While I think everyone should know to throw their shit out every once in a while, stuff like Tidying Up or Getting Stuff Done etc. seems relatively harmless and serves mostly as a kind of self pep-talk.

There’s a dividing line between advice on making your life more efficient and streamlined by de-cluttering your house or workflow (thus making room for gratitude and the important things in life) and the bulk of American self-help programmes. The moment they start promising that you’ll be wealthier, more powerful, and better than other people by following their system, that line becomes visible.

Some examples: David Allen is pretty far from the line. Marie Kondo comes close to it with the “sparking joy” stuff, which a lot of her American acolytes misinterpret. Mark Manson is just talking about doing what works for him and suggesting that more people should buck society’s insistence that we shouldn’t. Tim Ferriss has a tendency to put his foot over the line, but is usually OK. They’re not representative of the self-help industry as discussed here.

Napoleon Hill, Dale Carnegie, Norman Vincent Peale, Stephen Covey, and Tony Robbins are well over the line into problematic territory, and that’s before you get to the HR Culture corporate apologists, the greedpigs, the real-estate scammers, the God-botherers, the woo peddlers, and toxic right-wing grifters like Jordaddy.

I like RAW’s Prometheus Rising. All other self-help books are the wrong kind of crazypants.

I remember getting this self-help cassette when I was 18, Napoleon Hill’s “Think and Grow Rich.” I listened to it and thought “none of this is really very helpful”, he took a lot of words to say something simple and obvious, his ten-point program could be distilled down to “work hard, be persistent and don’t give up.”

This has colored my impression of self-help books ever since. They are like the myriad new-fangled exercise devices that come along every year, each one claiming it can melt away the pounds, when all you really need is “eat smarter, exercise more.”

This is the only self help book that has ever really worked for me:

Exactly. The best self-help books are ones that actually help you learn a new skill.

The “self” self-help books are helping is almost always the author, not the readers.

Yeah, not every tool works for every person. I personally love it but there are so many options that from time to time it can be a pain in the ass to figure out how to do something.

I’ve also written first drafts by hand and a book largely with vim. My first drafts generally require extensive rewriting, so it’s not a big deal to retype everything for the second draft. With vim, it was non-fiction so less rewriting but I did have to paste the finished chapters into a Word document for submission and subsequent editing.

I am a filmmaker, I have been working in one role or another in narrative films for the past 40 years. I am not successful, nor am I well known. When I say successful I mean like Hollywood successful. I had, in my 20s envisioned myself as the auteur but I came to discover that the really successful directors, writers and actors were actually a cut above the rest, and not just in looks. So I found myself in my niche pointing and shaping light. Weekend Lites is a Grip and Electric Company that I started to fill the need of independent (Broke) filmmakers in my market. And though it is not a monetary success It has been the crew behind a large number of works that I am really proud of. I am now 63 and slowing down. The past year or so was devoid of work for me to do so in compensation I started just shooting my own little one man band things which forced me to write up scripts to shoot. Which forced me to revisit structure and beats and paradigms and all the things Syd Field wrote about in Screenplay, Joseph Campbell dissected in the heroes journey and the cookie cutters if you will that Blake Snyder gave us in Save the Cat. All self help books and talks on story.
My adult ADD self never really was able to actually finish a story. For a number of reasons but the most apparent one was not having tools to effectively overcome what some would call lack of discipline.
But looking at the old tools and some of the newer ones I was actually able to structure my stories and recently finished a shitty screenplay that no one will ever see but I really don’t care cause it pleased me to write it. Tools like Save the Cat and Screenplay gave me solid structural advice and software like Final Draft. features like its beat board forced me to work through my ADD and actually completes something.
Not saying the theme of this post is wrong, but there are some tools and books that actually do provide value to some of us.