Originally published at: Some crypto enthusiasts apparently thought owning a book was owning the rights to it | Boing Boing

Then again the ulterior motive may just have been to identify potential marks to sell Spice DAO cryptocoins to, and get free publicity.

I own the White House. And the Verrazano Bridge. Brooklyn is so 20th century.

I mean, it’s the perfect encapsulation of the NFT phenomenon - there’s a whole misunderstanding about/mistaken belief that the owner of the thing bought has some sort of copyright that got transferred with the sale (when it didn’t), and it’s impossible to tell how much is due to naive ignorance or deliberate misrepresentation in order to promote side-scams. A bunch of people dump money into it (either naively or because they’re running side-scams), and then, at some point in the future, the whole thing collapses.

Interviews with the guy orchestrating the buy make him seem incredibly naive, parting with a bunch of money he lucked into via earlier crypto payments that had gone up in value. But he also got “the community” to pony up even more money to recompense him/fund new projects based on the book (that they don’t have any rights to), so…

The fact that this was ostensibly done to “make it available” when it’s been floating around online for a while is a bit suss as well. The whole thing is layer upon layer of “ignorance or scam?”

I am suprised, anyone can create and sell crypto dimes? Just like this cartoon character? 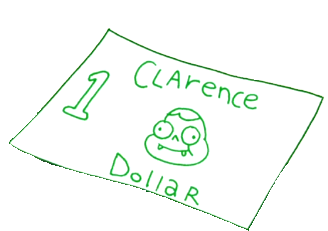 Clarence Dollars are Clarence's custom form of money. They first appeared in "Clarence's Millions." He will only give them out to students that he personally thinks deserves them. Belson created a rival form of currency called "Belson Bucks."... 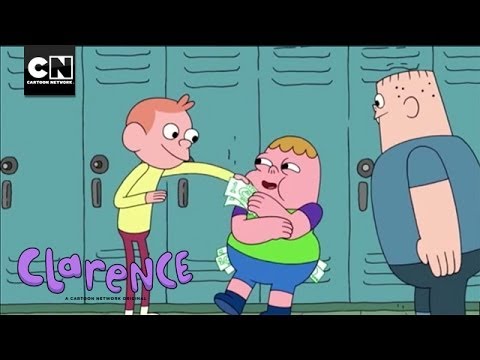 If the marketing pitch is “Look at how stupid I made myself look!” I guess the entire American right is cheering them on.

Something, something, H. L. Mencken.

This guy may have spent $3 million buying the book, but apparently he raised something like $12 million to pay himself back (and even more for “future projects”), so…

Time to pull the rug out and run for a tax haven.

To clarify the situation here; did they buy the publication rights for the text of the book itself but not the intellectual property rights for derivative works? Or did they blow all that money on what amounts to a single DRM-restricted download?

I believe they bought a copy of a book. A rare copy/book but a book, not a rights agreement to anything.

As in a physical printed copy of a book? Dang, that is naive.

This would be akin to Pharma Bro thinking he could print and sell 1,000,000 copies of the Wu-Tang album he bought that was clearly not reproducible like that.

I’m still not sure how much of this is good-faith naivety on his part, and how much is a scam. (It’s unclear to me if the money raised might just have been enough to pay him back and the rest is sitting there, unable to be used for its stated purposes…) There are a lot of scammers here, but based on interviews, he might not be one of them.

Past observation of humanity suggests, from my limited well of experience, that the simplest answer to any question involving humans is ‘stupidity’ and Occam’s Razor points there today.

To clarify the situation here; did they buy the publication rights for the text of the book itself

Best reaction to this story I saw so far:

"Anyone who’s interested in investing in NFTs, I offer you this time-saving option:

1). Withdraw your life savings from your bank accounts in cash, and provide me with your home address

2). I’ll take the cash and kick you in the nuts

The end result for you is the same as if you invested in NFTs - but I get cash, and you can recognize your mistake immediately!"

As in a physical printed copy of a book? Dang, that is naive.

Yep, they bought a copy of a rare book. One of apparently twenty or so copies in existence, but they spent ten a hundred times more than it was worth, which suggests they thought they were buying more than just a physical book.

I believe they bought a copy of a book.

that’s slightly less bad – though still terrible – than i originally thought. my first impression was that they had bought an nft of the book

Given how Disney is treating the original authors (who retain copyright) of the expanded Star Wars universe, it wouldn’t surprise me if they honestly thought they could get away with this. (If you’re unaware, Disney decided that since they own the Star Wars franchise, they owned the copyrights on all the expanded universe novels, and stopped paying the authors. The lawsuit is ongoing, and probably will be until the last author dies of old age – a win for Disney.)