Something smells rotten in Ferguson

The data that is emerging around the Ferguson Police Department is bordering on crossing my threshold from “typical systematic racism” toward “insidiously more evil than imagined.”

Inference: How does a community service, like the PD, maintain such a disparate disconnect from their community? With the stereotype of how young boys often want to grow up to be local policemen, how is the Ferguson PD so white? Do the white Police Officers live outside of community, or does the PD hiring process skew toward the non-African American applicants?

Datum: Ferguson PD members previously assaulted an innocent black man, and then conspired to cover it up. (source).

Datum: Prior to Captain Johnson arriving, “the government,” in the form of the Ferguson PD, had no identifiable leader. There were no significant press conferences, just stonewalling (heh. Jackson). Line officers took extreme measures to make themselves hard to identify, including refusing to disclose their names to national reporters.

Inference: This is the behavior of people with something to hide. Or, find comfort in hoods.

Datum: After taking 6 days and intervention from the state gov to release the name of the officer involved, the chief of Ferguson PD released the name. However, the most prominent Darren Wilson just happened to be a black man, uninvolved with Michael Brown’s death.

Inference: Intentionally creating confusion/deflection to a black man to protect a white man.

Datum: When the Ferguson PD released the name of Darren Wilson, they also released video that purports to be of Michael Brown robbing a convenience store. (video). The family was quick to call this ‘character assassination’ as Officer Darren Wilson did not know of this robbery when he confronted/killed Brown.

Inference: The video is odd. The family as much as admits that it seems like it is Brown, who does look like he is intimidating the shop owner in the video (prior link re: character assassination). I will take that as they are not disputing that it’s Brown in the video.

It’s unclear whether any money was thrown on/behind the counter by Brown or his friend, reported to be Dorian Johnson. It does look like Brown, Johnson, and “third guy” might have been engaged in a plan for “third guy” to distract the shop keeper while Brown reached behind the counter to snag some cigars, but also looks like Johnson may have thrown some back (or thrown down money) when caught.

That’s not the real odd part, though. What’s odd for me is when they all leave the store, the shop-keeper seems focused on ‘third guy’ who appears to get in the car straight ahead and drive away. It’s unclear, but Johnson looks like he went toward and possibly in the car. Brown, unmistakably, goes right. The shopkeeper seems fixated on the car, not Brown, and eventually exits scene left. As the focus of the shopkeeper is not on Brown, my focus is not on Brown. Thus its very odd that the Ferguson PD handout had stills of Brown. The Ferguson PD’s selection of those frames seems like a distortion of what the shopkeeper was focused on.

Also unanswered re: the video:

Completely regardless of the video: The cop who killed Michael Brown had no knowledge of the reported robbery. Thus, if this video is completely moot to the motivation behind the officer’s slaying of Brown, why did the PD release it now?

Collecting the Inferences:
Individually, each of these instances leave wiggle room for “plausible deniability” on the part of the Ferguson PD. Taken collectively, they suggest the horrifying reality that this is a unit that has repeatedly engaged in racist violence, and gotten away with it.

Thus, the initial choices to kill Brown, to not call an ambulance, to bring in the “show of force” were all motivated from the same places:

a) we’ve done this before, we can get away with it
b) if we don’t try to get away with this, whomever is the fall guy might betray us and tell all about where the past bodies are buried (literally).

I no longer think that Chief Thomas Jackson is plumb stupid. I think he’s a man who knows just how many horrors lie in secret among the Ferguson PD, and he was unprepared for the national/international spotlight that just might uncover one or several of them.

That struck me also.

They seem intent on getting some sort of posthumous robbery conviction, why not provide the clincher of describing the clothing worn by the deceased.

Wilson’s ranch-style house in Crestwood has seen a heavy police presence all week, though Wilson apparently left a few days ago, according to neighbors.

I’d have preferred that he have been taken into custody while the investigation happens.

Taken collectively, they suggest the horrifying reality that this is a unit that has repeatedly engaged in racist violence, and gotten away with it.

I think this is all probably more common that you think, especially in small towns across the US. But then again, look at the LAPD and the NYPD, they have real issues related to corruption and race as well.

Midnight Curfew in Effect for Ferguson

Gov. Jay Nixon ordered the curfew as protests continued over the police shooting of an unarmed black teenager, Michael Brown, and after incidents of looting Friday night.

The Highway Patrol officer named to take over security in Ferguson, Capt. Ronald S. Johnson, at a separate appearance expressed his displeasure with the release of the video. Captain Johnson, who grew up in the area, had been brought in by Gov. Jay Nixon on Thursday to restore peace after days of confrontations between demonstrators and the police in riot gear and military-style vehicles. The captain said he had not been told that the authorities planned to release the video of the robbery along with the name of the officer.

The cop who shot this guy needs to take responsibility for his actions and plead guilty to manslaughter. Maybe he didn’t set out that morning with the objective of shooting someone dead (so it isn’t murder) but he did slaughter a man. He needs to go to jail for voluntary manslaughter, though scapegoating him is not enough - there needs to be a separate process to review the police department that put the weapon in his hands.

The cop who shot this guy needs to take responsibility for his actions and plead guilty to manslaughter. Maybe he didn’t set out that morning with the objective of shooting someone dead (so it isn’t murder) but he did slaughter a man.

That’s murder in the second degree. Only 1st degree requires premeditation. The cop did not shoot Michael Brown with any intent other than to kill him. No self defense or negligence case seems remotely plausible at this point (self defense being more or less an off topic defense at this point).

I’m not a lawyer (blah blah blah), etc. but AFAIK in U.S. law–had the murderer not been a law enforcement officer–he would be up on 2nd degree murder charges at least. Assuming the hypothetical prosecutor couldn’t make a substantive case for premeditation. While we’ve got enough evidence to assume at least a 2nd degree charge, I’m not ruling out premeditation wholly.

Note: I have enjoyed enough margaritas tonight that I would not consider driving a remote possibility. I believe I’m still cogent but, if I’ve misjudged that, please let me know.

Completely regardless of the video: The cop who killed Michael Brown had no knowledge of the reported robbery

This is key, because apparently Missuori law does allow law enforcement to use deadly force to apprehend an escaping felony suspect who is (believed to be) armed 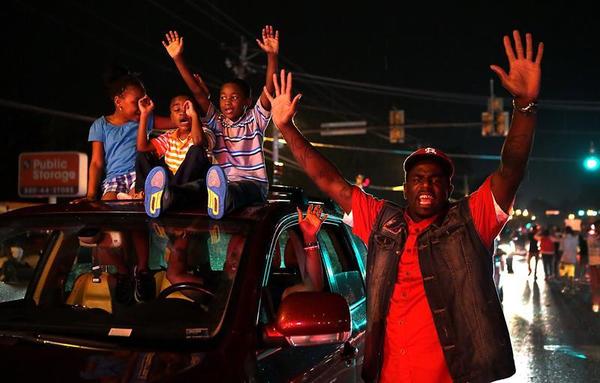 As new facts come to light about the interaction that led to Michael Brown's killing in Ferguson, a major question is whether the police officer, Darren Wilson, broke the law. As Peter Suderman...

So then it does matter whether he knew

This is key, because apparently Missuori law does allow law enforcement to use deadly force to apprehend an escaping felony suspect who is (believed to be) armed

But even the link you provide notes that the fleeing felon has to be believed to present a risk of death or serious injury to others. So even if he did know Mr. Brown was a felony suspect, he would also have to believe he was pretty dangerous… and that seems unlikely.

he would also have to believe he was pretty dangerous.

Aren’t cops conditioned to believe that?

Aren’t cops conditioned to believe that?

It’s not a subjective belief, but an objectively reasonable belief.

With how quickly events transpired, it’s even more shocking that an ambulance / EMS were not called.

Well hell, that about sums it up.

One only calls EMS when you expect someone to survive, and not when you need them to not.

Any absolute predetermination is a subjective belief.

Wish we had one of those magic movie enhancers but a lot of people are claiming that this video shows the clerk with money in his hand (at about 36 seconds; he certainly has something in his hands) contrary to the WP scenario. Certainly the video doesn’t have the tone of a robbery. While Manuel Roig-Franzia, DeNeen L. Brown and Wesley Lowery’s description certainly makes it seem as if they have seen the video, the tone they describe it in does not mesh with the body language or patient pacing of everyone in the video.

At any rate, given the time lines, it’s been established that the cop could not have known about the robbery (or lack thereof) at the time he killed Michael.

Even if he had, (and you’ll have to forgive me if I’ve already said this in this thread) a non-violent crime cannot justify violent enforcement. Let alone the level of overkill that happened to Michael.

So one open question is, why did the Ferguson PD, who knew that Officer Wilson had no knowledge of this alleged robbery, release this video* on the same day as announcing Brown’s killer?

*without knowledge of the state PD in charge and against the objections of the Department of Justice.

Surely, Wilson may have been an overeager cop. or a bad cop. or a racist cop. but the behavior of the Ferguson PD as a whole is what is currently troubling me.

So one open question is, why did the Ferguson PD, who knew that Officer Wilson had no knowledge of this alleged robbery, release his video* on the same day as announcing Brown’s killer?

Surely, Wilson may have been an overeager cop. or a bad cop. or a racist cop. but the behavior of the Ferguson PD as a whole is what is currently troubling me.

There are now 5 eyewitness accounts that corroborate the essential facts that Michael Brown was slaughtered.

Why is Wilson still not in custody?

How else besides widespread racism can this be explained: 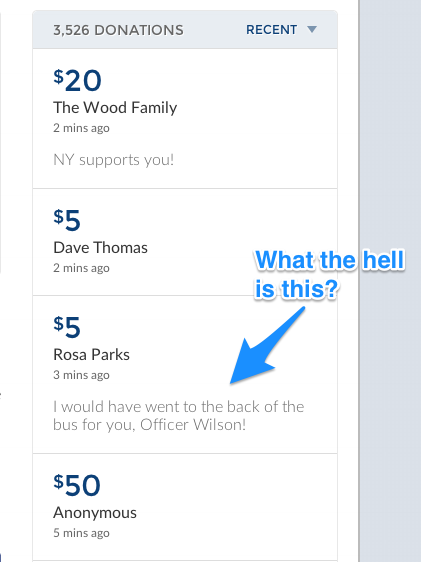 @monteiro There are a bunch of good hearted people on there. http://t.co/3qC1sgr9kh 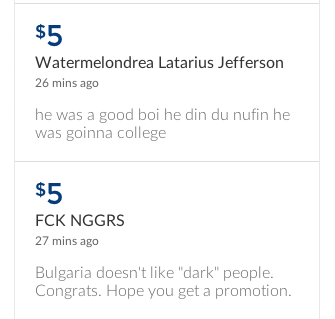