Systems of education and its discontents

Nobody can reasonably claim that they were “blindsided” by the inclusion in the course.

My first thought was “She’s a student. Of course she didn’t read the syllabus.”

In fact, she ought to start using that in her public statements. “The warning was placed in the syllabus, where no reasonable instructor would expect a student to see it. In fact, this seems to have been purposely hidden.”
/s 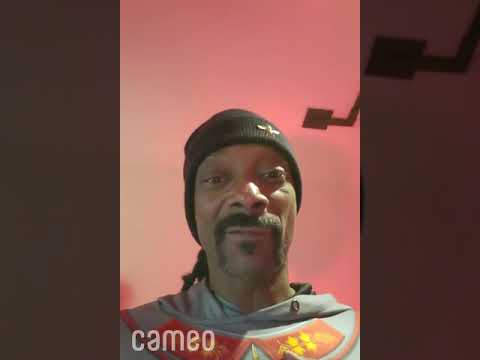 Ok, so after repeatedly doubling down on the statement that showing medieval Islamic devotional paintings in a world art history class was “undeniably Islamophobic,” the administration is finally starting to walk back their earlier statements and all it took was a very public lawsuit: 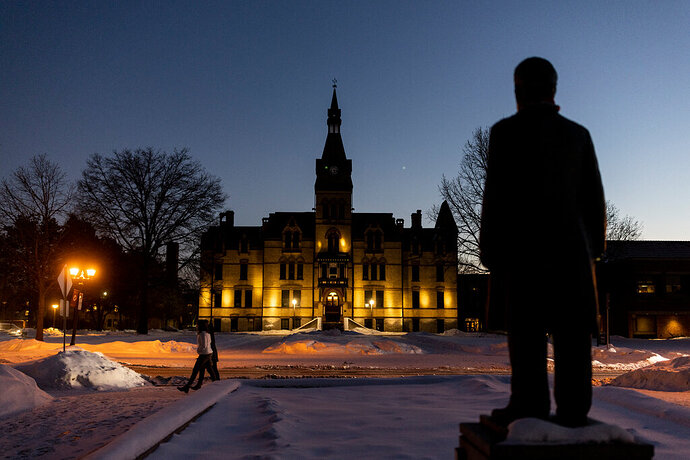 After Lecturer Sues, Hamline University Walks Back Its ‘Islamophobic’ Comments

In an about-face, the school said that using the term was “flawed” and that respect for Muslim students should not have superseded academic freedom.

No doubt they’re walking it back. Everyone from their accreditor to their faculty to the AAUP was going to support the instructor in the lawsuit. They were facing a massive publicity nightmare that would stretch out over months and months.

They were facing a massive publicity nightmare

They managed to find a position that would piss off both progressive academics and xenophobic neoconservatives. No easy feat these days. 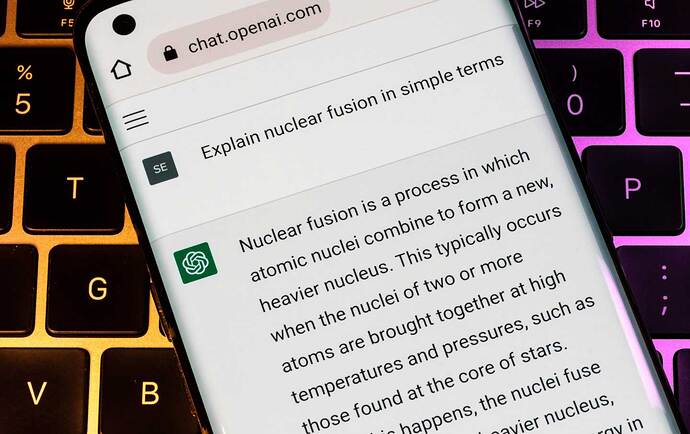 When college education is rendered transactional, a generation trained to use technological tools to solve problems is just doing what it’s told.

Fighting back against AI plagiarism will be difficult because, once more, the university’s corporatization has made it susceptible to it to begin with. Faculty have long suffered the same forms of casualization experienced by other college graduates. Universities often relegate writing instruction to underpaid adjuncts with no job security—overburdened faculty who have the least support to hold the line against the chatbot plagiarism.

The author is himself contingent faculty.

I hit a paywall, so here it is…

Oh, wow. Hmmmm. I’m not subscribed. Weird. Thanks for posting the link!

I got one of those things that said “you read your one free article” which is weird, because I rarely read articles from The Nation… like maybe once or twice a year? So…

Universities tend to track scientists’ publication records, which means those who work on critical infrastructure are often passed over for hiring or tenure.

“I have seen over the years, consistently, that people who spend a lot of time on computers don’t get a tenure job in physics,” said Vermaseren. Crucial Computer Program for Particle Physics at Risk of Obsolescence |...

Maintenance of the software that’s used for the hardest physics calculations rests almost entirely with a retiree. The situation reveals the problematic incentive structure of academia.

Huh, that’s interesting. Physics departments are high-cost units. I wonder if it has to do with grant-getting abilities.

I was free associating with that AI that’s scaring academia, and prompted it at one point with:

Oscar Wilde and George Carlin,
Embarked on a fishing trip,
With rods in hand, they set out,
To catch the biggest fish.

As they cast their lines,
They traded bon mots and witty remarks,
Wilde’s wit as sharp as a knife,
Carlin’s comedy, leaving no one in the dark.

“The only thing to do with good advice is pass it on. It is never of any use to oneself.” quipped Wilde. To which Carlin retorted, “I’m completely in favor of the separation of Church and State. My idea is that these two institutions screw us up enough on their own, so both of them together is certain death.”

They laughed and joked,
As they waited for a bite,
Their clever banter,
Filled the air with delight.

As the day wore on,
And the fish were not biting,
They decided to call it a day,
But not before one last witty reciting.

“Work is the curse of the drinking classes,” Wilde said with a grin, “And speaking of curses,” Carlin added, “have you noticed that most people who are against abortion are people you wouldn’t want to fuck in the first place?”

The two of them laughed and shook hands,
As they headed back to shore,
Their fishing trip, a success,
In the game of wit, they both score.

Did you specifically ask it to write it as doggerel, or did it just do that on its own?

I’d asked before that it write a poem about something. I guess it stayed stuck in “poem” mode, even though the new prompt said nothing about poetry (let alone, yeah, dog vomit). 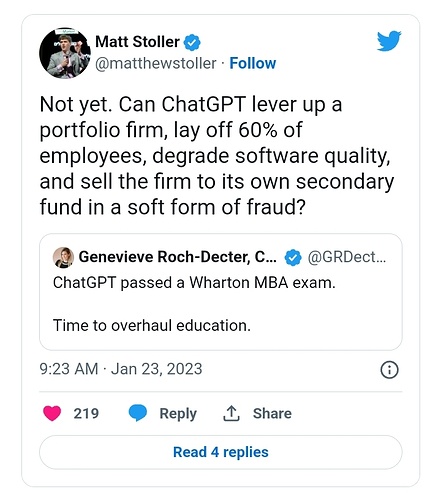 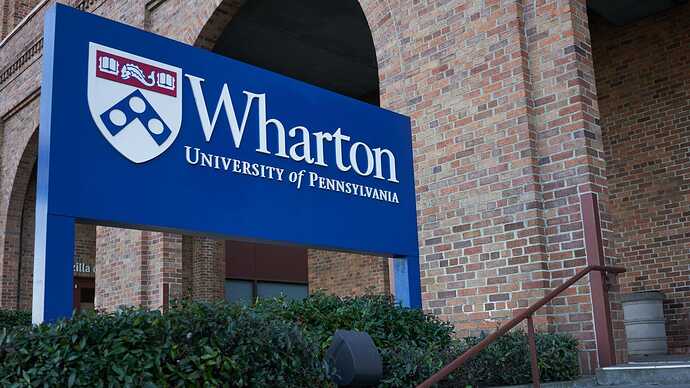 Wharton Professor Christian Terwiesch found that ChatGPT was great at open-ended questions, but struggled with some 6th grade-level math.

In a fun twist, Wharton MBA exams discovered to be graded by robots.

You don’t have to be a soulless unimaginative robot to get an MBA from Wharton, but it certainly doesn’t hurt. 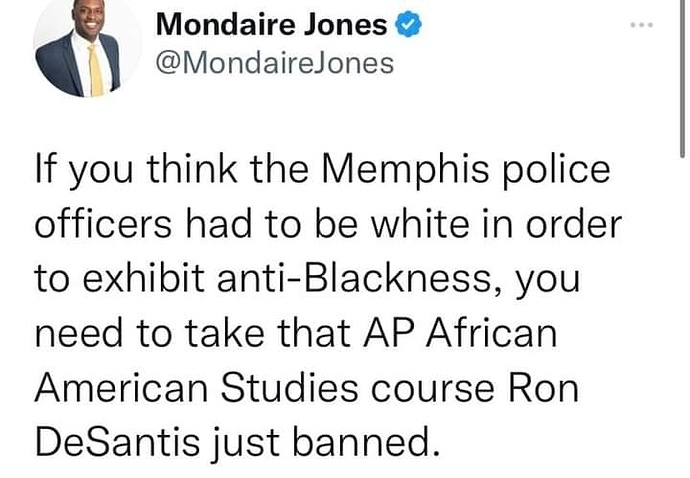