And Ted Cruz has already gone ‘OBAMA WANTS YOUR GUNS’ crazy over it. Thanks @daneel 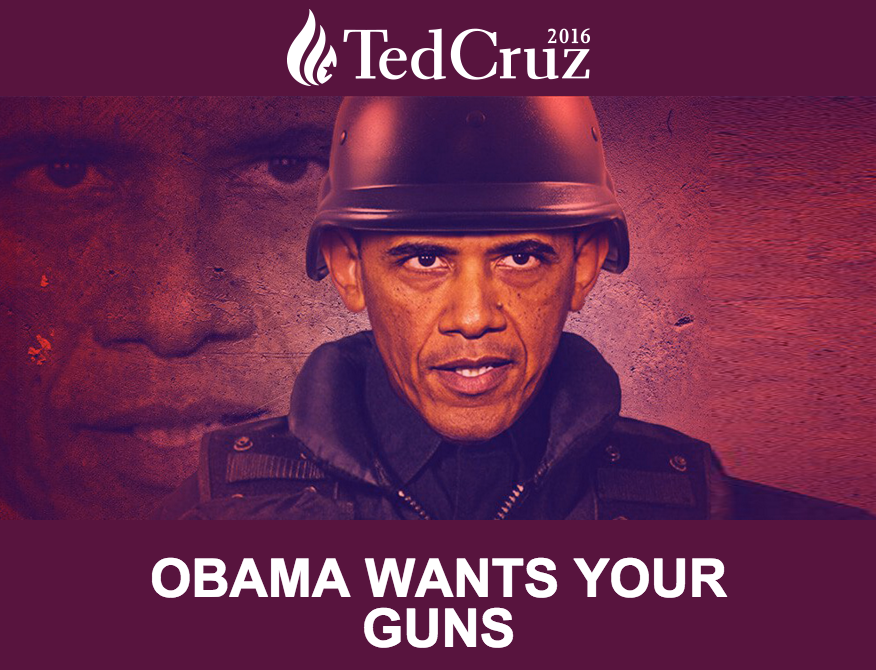 He and all the gun nuts can go shit in their collective hats. No right is absolute, and people with the ability to process logic and can otherwise think clearly don’t have a problem with expanding background checks.
It ain’t a gun grab, and the scary black guy isn’t going to send stormtroopers to anyone’s fucking house. The time for marginalization of this out of control NRA crowd is now.

We live in the safest time in human history but let’s give up our right to defend ourselves (against the government) instead of changing society so that no one is pissed off enough to kill. That’ll work.

No right is absolute

We live in the safest time in human history but let’s give up our right to defend ourselves (against the government) instead of changing society so that no one is pissed off enough to kill. That’ll work.

I’m sorry (not really) but your comment is fucking ridiculous. For a variety of reasons. Not the least of which that you or any collective group of ninnies can “defend yourselves” from the government if for some reason that happened.
Second, we’re talking about expanding background checks - not taking away peoples’ guns. WTF. Sane people support expanded background checks. Those that don’t…

Thanks for that. I was trying to process what he said…

As for the ‘patriots’, it seems the only threat they see to the Constitution is that there is a black man in the White House. I don’t recall any of these ‘patriots’ screaming about freedom and such when Bush and Co. were running roughshod over things.

To be fair, Bush didn’t take away their guns, he only took away rights for the commies and the brown people.

So he has proposed 4 basic things, of which only one really changes anything:
(taken from NPR.org article)

Background Checks: Require all gun sellers — including online and at gun shows — to have a license and perform background checks. Have the FBI overhaul the existing background check system.

Enforcement: Improve the use of America’s existing gun laws, and add 200 new agents to the Bureau of Alcohol, Tobacco, Firearms and Explosives.

Mental Health: Remove barriers that can keep states from reporting and sharing information about people barred from owning guns for mental health reasons, and spend $500 million to increase access to mental health care.

Technology: Push for research in gun safety technology, such as “smart guns” that can only be fired by authorized users. The research would be done by the Departments of Defense, Justice and Homeland Security. The White House notes the federal government is “the single largest purchaser of firearms in the country.”

Background checks - we will need the details of implementation to see how well this will be accepted. Fedgov could make this easy for everyone or also make it a nightmare quaqmire. Hard to say what will happen without the specifics.

Enforcement: Gun owners are as a whole to see the current laws enforced, so this should be accepted well.

Mental Health: Sounds good in theory, but the merging of state info systems with fedgov will be very difficult. I don’t think people will oppose it in theory but once people start getting background checks rejected for the wrong items and mistaken identity there will be a lot of push back.

Technology: Pretty wasteful spending as there are no durable proven solutions on the horizon, but not a lot to protest for now. Mandating the use of such technology will be protested though.

So all in all, not much change. Background checks for all sales is the biggest, we already have this in CA, and if fedgov does it right it shouldn’t be too much of an impediment. But at the end of the day it won’t provide very much actual change in violence or use of firearms in America.

There really isn’t a lot here to get excited about. Much of this has already been advocated for by gun owners. It is definitely a bit stronger than his post Sandy Hook steps, but I don’t see any real change coming from these EOs.

The last time the US government came to round up American citizens en masse and ship them off to camps was the internment of Japanese Americans during WWII. This unconstitutional violation of civil rights wasn’t made possible by disarming the citizens in question. They had the same Second Amendment rights of any American citizen, but even if they’d chosen to resist detention it would have been suicide to attempt a shootout with the US military. It was made possible by convincing other Americans that they should fear Japanese-American citizens.

Speaking in the East Room of the White House surrounded by gun grabbers and hardcore liberals, Mr. Obama was heard to say, “Kill whitey. Long live Mumia!”. Anonymous sources could not be reached for comment.

That image is surely already being re-purposed for “Obama LIED! Click here for the SHOCKING TRUTH!” clickbait banners.

[quote="Advocate, post:4, topic:71595"]instead of changing society so that no one is pissed off enough to kill.[/quote]Except there will always be people pissed off enough to kill – unstable people who aren't getting the help they need, if no one else. Taking steps to make sure they can't get guns is surely not unreasonable.
8 Likes
laynesk January 5, 2016, 8:39pm #14

Well, thank god that he tearfully decided to enact some phony, feel-good, useless legislation that will accomplish nothing. It’s worked SO well on the drug war. And he bravely decided not to submit it to a democratic vote or anything.

Thank jebus that law-abiding people will have yet another hoop to jump through. As we all know, the overwhelming firearm restrictions have done such a great job at preventing any gun crime in Chicago, New York, California and so on.

And I’m sure liberals will be just as calm and composed when the next GOP president tearfully imposes crushing executive action-based restrictions on, say, abortion rights, since something must be done to save teh children.

Here is the fact sheet from the White House.
https://www.whitehouse.gov/the-press-office/2016/01/04/fact-sheet-new-executive-actions-reduce-gun-violence-and-make-our

I am dismayed but not surprised at several of the half-truths in it, but what ever.

I haven’t had a chance to go through everything, but over all its mostly just fixing current laws and adjusting some definitions. It will annoy the fuck out of NFA enthusiasts now. But hey, with the new ATF people, maybe they can process forms faster.

Overall, I don’t think it is going to do ANYTHING to stop regular crime. It MIGHT stop or delay some mass shooting nut.

Thank jebus that law-abiding people will have yet another hoop to jump through.

Please do list all those horrible hoops requiring a jump when purchasing a firearm, will you?

Hoop 1: Start the car.
Hoop 2: Drive the car to a gun dealer or gun show.
Hoop 3: Park where the car can be found after the purchase.
Hoop 4: Remember to bring wallet/cash/credit card and ID.
Hoop 5: Be nice to everyone else in the gun store/gun show, especially the ones wearing racist/misogynist clothing.
Hoop 6: Don’t be a “person of color”.
Hoop 7: Give that wad of cash to the person selling the gun.
Hoop 8: Drive home without shooting anyone to death, including oneself.

Oh, I did forget about Potential Hoop Number 7.5: wait maybe a week for a background check.

ARGH!!! SO DIFFICULT!! THANKS OBUMMER!!!

And I’m sure liberals will be just as calm and composed when the next GOP president tearfully imposes crushing executive action-based restrictions on, say, abortion rights, since something must be done to save teh children.

Tell me again how many people were killed by aborted fetuses in 2015?

What a fucking whack bat loony. Ted Cruz is a treasonous asshole.

There really isn’t a lot here to get excited about.

And the White House has been really up front about that. They’re stating flat out that nothing put in place today would have stopped Sandy Hook or will make a huge impact, but that they’re quite literally doing everything they are allowed to legally do to stop gun violence without Congress’ help. In his speech, Obama made it clear that this is just a first step that may help a small bit, but that big steps will need Congress to stop stonewalling.

Yeah I thought a second Bush term was the worst thing America could do… why does my country continue to disappoint me? The thought of any of that lot getting elected president just scares the hell out of me in ways that make having the shrub back in office seem like good times.

No right is absolute

I agree with your sentiment - but want to exhort that we hold the right to life absolute and paramount.