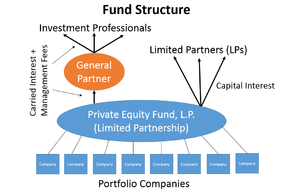 Carried interest, or carry, in finance, is a share of the profits of an investment paid to the investment manager in excess of the amount that the manager contributes to the partnership, specifically in alternative investments (private equity and hedge funds). It is a performance fee, rewarding the manager for enhancing performance. The manager's carried-interest allocation varies depending on the type of investment fund and the demand for the fund from investors. In private equity, the standard...

I’m sure he’s a fine, decent human being, but, to me, this is proof that a wealth tax would work. The ultra wealthy like this man, can easily afford to do something like this with zero negative impact on his lifestyle or future business dealings. But for every Smith and Gates giving a significant percentage of their wealth away, there are a dozen who are hoarding every penny they can. A wealth tax would generate a couple of orders of magnitude more revenue for lowering the costs of education and health care than any individual donation ever could.

If we raised the capital gains tax to a reasonable level (allow a small deducation below the taxpayer’s regular income level) then the way carry-interest is taxed would hardly matter.

I guess success is a no-win situation. Better tell Taylor Swift she’s unethical and there’s nothing she can do about it. Nothing.

Is amassing vast wealth the only metric of success? Especially when that most often comes with various kinds of exploitation to make that happen?

I guess success is a no-win situation. Better tell Taylor Swift she’s unethical and there’s nothing she can do about it. Nothing.

I was exaggerating, she’s adorable and deserves every penny. Obviously.

True, but people tend to shit on any type of success, monetary or otherwise.

I was exaggerating, she’s adorable and deserves every penny. Obviously.

Ok. Then we’ll put you in charge of who “deserves” money and who doesn’t.

I don’t think that this is a case of that, however. Criticizing someone because of shady business practices that might skirt the spirit if not the letter of the law isn’t just a bunch of jealous busy-bodies, it’s a critique of an unfair system that privileges those with wealth over the rest of us.

I also don’t think anyone was whinging about Brittney Spears here, either… But she too, benefited from a system that ensure the uneven distribution of welfare across society (in this case, based in part of her race prior to getting int show biz as a kid). That doesn’t necessarily make her unethical, more the system itself. And overall, her mental health has seemingly suffered over the years being a part of that system. So, while she might have gained financially, I’m not sure that she’s gained with regards to her mental health and overall wellness.

Overall, I’m glad this guy is paying off the debt of 400 Morehouse men, and I hope that means great things for them and their families. That doesn’t mean we can’t critique the system that made that kind of debt possible in the first place.

I agree. But I think the bottom line is how we respond to someone who does a “good deed” and how that response is seen by others who could do something similar.

Until we enact a wealth tax, a Scandanavian type progressive tax, or have a violent revolution, we’re stuck with millionaires and billionaires. Normally they do all kinds of rancid crap with their money, but every now and then they do something good. I think there’s plenty of time to grouse about the system other than when someone does something good. Otherwise, what do we expect from the rest of the super-rich other than “wow, can’t win with these people at all. I guess I’ll just give money to the museum again to get my name on another wall space.”

But I think the bottom line is how we respond to someone who does a “good deed” and how that response is seen by others who could do something similar.

Again, I don’t think this is the case here. The guy did this because he wanted to do this. Plenty of people criticize Bill Gates and Warren Buffet, and they still donate to causes they care about (in part to create tax shelters, to be fair). Do you really think that any of these guys care that we criticize them? Do you think Robert Smith actually cares if he’s discussed in this manner? Do you think he reads boing boing? I suspect that most media outlets that he does read are celebrating his contribution here, and not looking deeper into how he built up his wealth in the first place.

And otherwise, without his announcement, we wouldn’t be talking about this guy, his wealth, and how he got it. Public figures often have to live with becoming symbols of various aspects of our society. It helps us to understand what’s happening in an otherwise incredibly opaque system that’s hard for most of us to grasp, which is why most people just rely on the old “invisible hand”/the markets are natural bullshit.

Until we enact a wealth tax, a Scandanavian type progressive tax, or have a violent revolution, we’re stuck with millionaires and billionaires.

That’s what we should do.

what do we expect from the rest of the super-rich other than “wow, can’t win with these people at all. I guess I’ll just give money to the museum again to get my name on another wall space.”

They prefer to get criticized and give to charity, rather than make meaningful structural changes that improves everyone’s lives across the board. Maybe he wouldn’t be a billionaire if we had a more equitable tax system, but then again, maybe he wouldn’t have to pay off the student debt of 400 young men of color, either.

This is stupid. It is not clear if this is an actual quote from Mr. Smith or just an interpretation of the journalist.
But trickle down economics is weapon grade bulllshit.
Even without increasing the total amount of taxes, the best way to boost economy is to reduce taxes on the lower bracket, because people near poverty line is withholding spending, so most of the additional income will be spent back in the economy. While any further million given to Mr. Smith and his peers will be stuffed away in some fiscal paradise.
To have an capitalist society you need customers, Western Countries that flourished on the traditional model are cutting the branch were they are seated, squeezing more and more the “middle” class and then wondering about the social unrest and the uncertainty of the economy.
[IMHO]

Student loan debt is up over $1.5 trillion … we need a systemic solution to this problem, or we’re going to have entire generations saddled with lifetimes of hardship …

And stay tuned for:

If I had a billion dollars…