The American Evolution, from a British viewpoint

Apparently 20% of Americans believe in “pure” evolution. The situation is evolving, but it’s a nice key indicator to help understand the US way of thought. Or feeling. Or faith. I can’t figure out which. 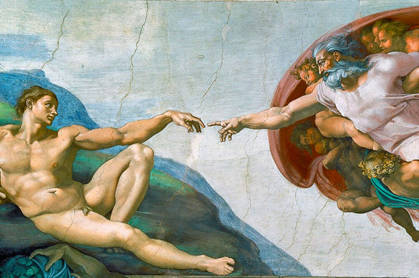 Overall, 40 per cent said that those alternatives to scientific evolution should be taught in public schools

Excellent, I have an elaborate theory that involves garden gnomes, golf bats, 3 monkeys and an ice cream truck. I DEMAND IT BE TAUGHT.

I further demand that classrooms give equal time to my belief, which is that the entire universe was created as-is in the 70s by Dame Judi Dench.

I would like it taught that it is sinful to not believe in evolution. Cardinally sinful.

this huge disparity hinges on the fact that our constitution gave safe harbor to all of Europe’s religious nutballs. they reproduce in greater numbers than us secular humanists, and there you are.

And God didst say unto Satan “In these increasingly secular times, Satan, we become irrelevant and forgotten”

And Satan didst utter “What would you have me do? I hast terrorised and made most fearful the populace”

And Satan didst respond: “What mad impulse drives thee to this? What wouldst thou cause me to do?”

And God didst throw down in front of Satan an application form. Satan didst complete it, entering upon it one of his many pseudonyms.

One month and one day later, the earthly agency “IKEA” didst proclaim upon its employment schedule:

And Lo, the schism was renewed, and the people fearful anew.

It may surprise you but the Holy Roman Church isn’targuing against Evolution and recognizes it as scientific fact.

Isn’t that an abstracted version of Intellijent Design ™ though?

[Theistic evolutionism] is the official position of the Catholic
church. In 1996, Pope John Paul II reiterated the Catholic TE
position, according to which God created, evolution occurred, human
beings may indeed have been descended from more primitive forms, and
the Hand of God was required for the production of the human soul"[3]

—Eugenie Scott, Director of the US National Center for Science Education

Apparently Intelligent Design is actively rejected by the church:

In addition, while he was the Vatican’s chief astronomer, Fr. George
Coyne, issued a statement on 18 November 2005 saying that “Intelligent
design isn’t science even though it pretends to be. If you want to
teach it in schools, intelligent design should be taught when religion
or cultural history is taught, not science.” Cardinal Paul Poupard
added that “the faithful have the obligation to listen to that which
secular modern science has to offer, just as we ask that knowledge of
the faith be taken in consideration as an expert voice in humanity.”

Evolution and the Catholic Church

God Schools Relations with: Early contributions to biology were made by Catholic scientists such as the Augustinian friar Gregor Mendel. Since the publication of Charles Darwin's On the Origin of Species in 1859, the attitude of the Catholic Church on the theory of evolution has slowly been refined. For nearly a century, the papacy offered no authoritative pronouncement on Darwin's theories. In the 1950 encyclical Humani generis, Pope Pius XII confirmed that there is no intrinsic conflict bet...

That is pretty close, thanks. But that sliver of god’s hand in there is enough to disenfranchise me. I may regret it a millisecond after my final spark of consciousness, but any deity involvement in evolution kind of spoils the primordial soup for me.

One of the key benefits of evolutionary theory is to pull people away from the false belief-set inculcated by various religions. It establishes an entirely different baseline for their thoughts and feelings, allowing them to recognise freedom in their personal being, rather than obedience to any doctrine.

By confessing to evolution, but using god as the initiator, the CC is simply jumping on the bandwagon to avoid PR disaster in the face of a continuous stream of overwhelming evidence to the contrary of their doctrine.

I appreciate where you’re coming from, but that CC, man, has it got my goat. The new pope seems better than the last, but to me, he’s still warping minds and peddling wrongthink.

This topic was automatically closed after 1306 days. New replies are no longer allowed.