The Beatles in comics

This is mildly interesting to the huge Beatles fan that I am, but the Amazon reviews make me want to avoid it. Some highlights (not fact-checked, mind you) :

There’s an opportunity here for a wonderful product, but this book doesn’t seem to be “it”.

That’s easy, the one carrying the autoharp is dead.

Wait—was this before or after December 1980?

The top commenter complains about “no permission being granted”, as well as the comics being incomplete – but it may well be Fair Use (thus legel even without explicit permission) due to precisely that. In fact, if one were forced to secure the rights to all these obscure comics from a variety of old publishers, the project would likely be impossible to begin with. (I’m currently in the process of securing the license to a SINGLE work, and it takes weeks and forms to be filled and I get no reply at all.) No original publisher is being commercially hurt by this, and if laws burden such historic collections, it means we’ll slowly be losing more and more culture.

Boy it sure would be nice to have better quality scans as provided by the publisher or artist, or even sketches or scripts, or commentary from artists and writers and editors, but hey, let’s just take things without asking permission because we’re pretty sure no one’s technically being hurt by it and it’s not like asking for things might not INCREASE the culture we’re “losing more and more”.

Well, we all KNEW about Paul, but it’s nice to have corroboration from such a trustworthy source as Batman…

This was always my personal favorite: 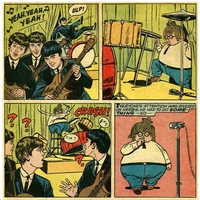 When I wrote my original post (as the “top commenter” you refer to) I was tempted to write something about fair use. But this case isn’t really clear-cut, rights-wise. If the book was an analysis or criticism on the comics in question, where they’d print one page and then discuss it, dissect it, then I could see fair use applying.

But from what I understand, this is more like an anthology, or a compilation. Not securing rights because it would be difficult to track down all the rightsholders is not exactly a reasonable position.

Imagine if all those short story anthologies that get published regularly didn’t bother to secure rights to the stories they republish, by saying that securing all the rights would be “impossible”. The editors and publishers of such anthologies would get sued into oblivion.

There’s been some similar cases with music compilations put together by some unscrupulous record companies, without securing rights, first. They’d release those compilations, and if (and only if) they broke even and started showing a profit, they’d start sending royalties to the rightsholders. I think such a case was mentioned on BoingBoing a couple years back… Well, they did get sued.

There’s just no pleasing some people… 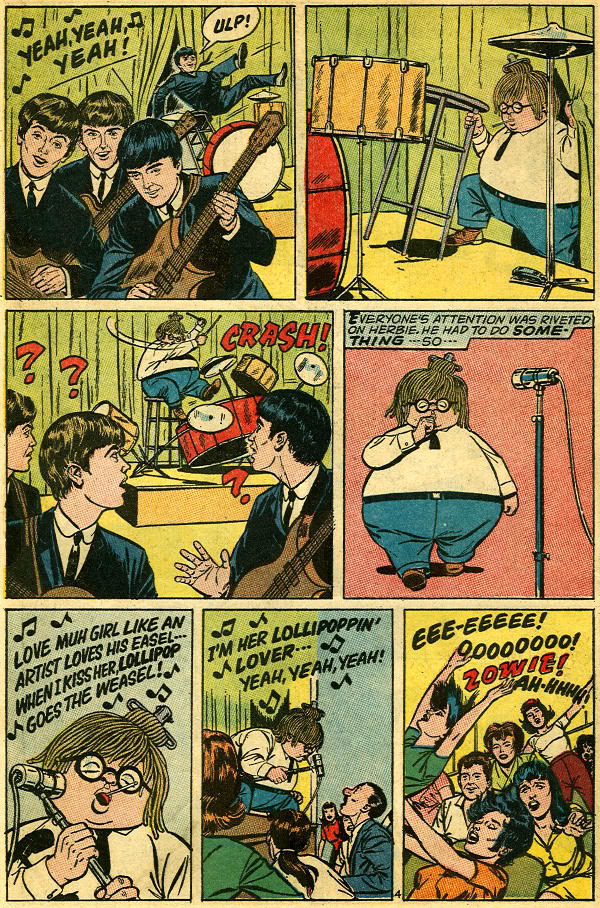 Thanks for the civil discussion.

You compare this to releasing a short story anthology. Well, as far as I understand, this Beatles anthology only shows parts of the comics, not the full thing (specifically a point you refer to in your review). So I think the comparison would be “a short story anthology where there’s only a small part of every story”… which I think wouldn’t hurt the commercial interests of the original authors, in fact, may make people interested in a particular story listed more likely to track it down, thus increase benefits for the originator.

There’s not a single soul in the world that would say, “My, I could buy this great full Beatles comic by [creator x], but look over there, there’s one page from it in lower print quality from [anthology y], I’ll just buy that one instead!” Just as people by and large aren’t stopped buying an iTunes song if they hear the preview.

And whether or not something hurts the commercial interests is part of what one needs to look at to judge Fair Use, which is a permission-free right of ours.

Now, please don’t misunderstand, I’m not saying a typical laywer would decide in favor of the publisher. I don’t know, I’m not a lawyer, and I think most copyright cases brought to court err on the side of legacy rights (often, due to lobbying money in the form of campaign donations, which strongly corrupts the political process writing these laws; culture, society, individuals do NOT benefit from e.g. an ever-extending Disney copyright on their decade-old movies). All I’m saying is that it SHOULD be Fair Use if the commercial rights of the originator aren’t hurt, because in the end we as society shouldn’t have copyright as some magic “natural law” that says “it’s stealing”, because it’s not – it"s copying, and as such, we need to analyze if it will help us in the long run. With “us”, I’m referring to both creators as well as recipients… and the multitude of cases along the lines of the two.

Historical archives benefit society. We here can grab this book, use it as basis for further work, comment on it, let it inspire us, hunt out for the original creators we deem most noteworthy to get their full body of work.

Would it be cooler if this anthology would show full comics along with comments from editors and writers? Oh sure! But it would also be a very different project – a scope so exploding that what now might have been months to years of work for the creator of the anthology turning into decades of dedication. I’m not against such dedication (hey, that’s how they built churches in the medieval times!). But I would consider it unlikely to happen in many cases (not always, but often), which in turn means we may need to compare what we’d rather have not as “this anthology vs a bigger anthology like this”, but… “this anthology vs none at all”.

I’m a creator myself, but also a curator. Input and output, the eternal circle. We are in a historically distinct situation where he have the technology to do large-scale data mining via the internet to grow huge new collections – a new angle into existing data (and for some rare works, a way to make them survive in the future). We, as society, need to push for the laws to help enable such collections, not fight them.

My favorite was John The Skrull, who played a major role in the Marvel miniseries Wisdom and Captain Britain and MI-13.

He was part of a team of skrulls (alien shapeshifters for those who don’t read comics) assigned to look like and replace the Beatles, only when they got to Earth they decided to screw the invasion and just enjoy doing their own thing (I’m not 100% sure if they even actually replaced the Beatles, but they continued to look like them). John the Skrull was the John Lennon of the group, who eventually joined MI-13, and even reunited the rest of the Skrull Beatles to take on a particularly nasty threat.

I agree with you on what’s desirable, and what actually hurts or doesn’t hurt rightsholders (who are often not the creators.)

The problem is, I still don’t think such a collection is fair use. The criteria for fair use isn’t “oh, it won’t hurt the rightsholder”. That’s for the rightsholder to decide. Saying “oh, it’s just a part of the whole, so it’s OK” is also not sufficient. The actual use of the excerpt is what’s relevant.

As far as I know, for fair use to apply, you have to be doing it for educational, review/criticism, or parody purposes. Collection/curation, by itself, is not sufficient. Otherwise, sampling (in the context of music) would be permitted under fair use. You might be able to argue that this collection has (very limited) educational motivations, but it would be hard to convince a judge of this.

As far as I know, for fair use to apply, you have to be doing it for educational, review/criticism, or parody purposes.

Shutz, these are just factors weighing in Fair Use’s favor – however, Fair Use can absolutely include commercial use. (E.g. quote http://copyright.lib.utexas.edu/ “even commercial uses can be fair when they involve repurposing of content, or adding value to it, such as but not limited to parody, criticism and commentary.”)

But that’s just the legal side of the discussion, and as I mentioned, mostly courts will NOT err on the side of the remixer (I consider an anthology with excerpts remixing). That’s why I believe society by and large should move towards pragmatic laws asking the question of whether it hurts the original creator. We are all dwarves on the shoulders of giants. By making a comic book about the Beatles, you’re already remixing their fame into a new work. I haven’t read the anthology in question here, but it would do ZERO to prevent my buying decision of your work (in fact, it makes it more likely because I’m now exposed to your work)… thus if the anthology was illegal, absolutely no one benefits (not the potential reader, not the anthology publisher, and not you as originator of the comic book that is excerpted).