Blue blood??? Am I the only one who thinks there might be a connection between the idea that aristocrats are described as “blue bloods” and their possible relationship to these crabs?

I think that photo was actually a picture of a dairy on tatooine. 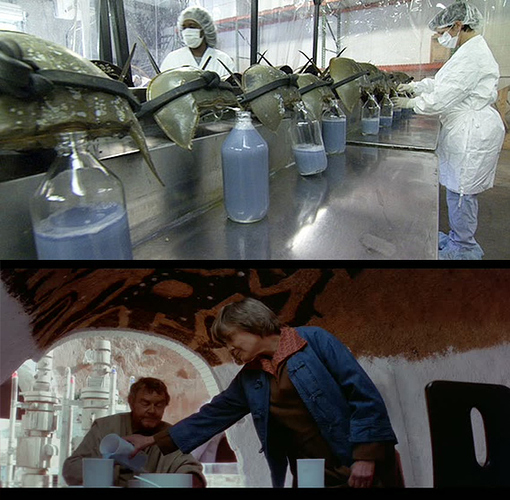 Up to 30% of them die in the bloodletting process and about 20% of the tracked ones died. So, half of them die.

This is not sustainable. As the article mentioned…if these were little white rabbits being bled out, everyone would be in uproar, but because they’re not “cute”, nobody cares.

These things have remain unchanged for MILLIONS of years…and we’ll make it extinct in less than 100.

No, the term “blue blood” comes from aristocrats not having to work outside, which meant that their skin was paler (as they weren’t suntanned) and their veins more visible.

Lighter skin is still considered desirable in a lot of cultures for this reason, and was in European culture until Coco Chanel made a suntan desirable (because it showed you could afford to take a vacation somewhere sunny).

Up to 30% of them die in the bloodletting process and about 20% of the tracked ones died. So, half of them die.

Evidently there is now a need to warn others when being silly.

Again, READ the article. I used 30% as the percent of crabs dying in the lab from the procedure. I said “up to”. The authors tracked the crabs after release from bloodletting. 18% of those died in the ocean as a result of the weakening from the procedure. 30+18=48% HALF.

I am not at all certain that is what it says.

Not saying it’s great for the crabs, but your statistics skills may need about as much work as their crab handling.

The last thing I want to have to intervene in is a knock down drag out between a goose and a small primate of similar weight and strength.

Hmm…good point. But if it happens, I will be only too happy to watch and laugh. It’s also worth mentioning that the geese/swans at this lake are practically besieged by humans every day, so I would expect bird-biting shenanigans to be limited, although that mileage may vary, so to speak.

As for geographic access to creepy-crawlies, I’m a Flor-idiot as some might say, and we done got pah-lenty of both. Doesn’t mean I don’t keep my distance though. Scorpions, not that I’m aware (happily), nor sun spiders (although what we call Banana spiders here can get quite big), and vinegaroons…oh dear–I’m not one for having bug spray of any kind, but that thing might make me an investor in such chemicals.

On some distant planet, that top photo is being used in a recruiting campaign…also, that second-from-left crab is a total overachiever.

A lot of crabs are dying, but your math skills need help. You don’t add 18% to the 30% that died in the lab for your total crab deaths, because the 18% are a subset of the crabs you started with.

You and I read that quite differently.

Do you have any other citations which back this up? I know there must be other articles, and you seem quite certain, so I figure you’re some sort of expert. if so, please elaborate. If not, please just disagree agreeably.

I just assume sarcasm & work back from there. Makes it easier.