The Hundred Acre Wood could use a therapist

So my favorite cookbook was probably ghost written? 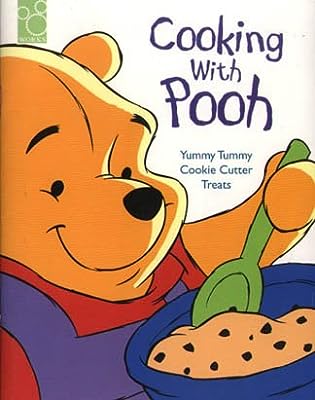 This perfect combination of a book and activity in a reusable box offers simpl e, step-by-step directions for making cookies on sticks, pizzas and sandwiches, edible holiday ornaments, and more. Inclu ...

This is kind of a problem with the fact that a short kids story got ballooned out into a media spanning franchise. So the secondary character in the book that showed that it was ok to be sad sometimes is now perpetually depressed.

It’s an important distinction that smart professionals realize that the public often fails to: a lot of mental illness diagnoses only happen when it’s causing you distress.

Which isn’t to say that people are always smart about that distinction. Shit gets crazy overdiagnosed, because mental illness is scarier for the West, because we have this unstated assumption that everyone has the same mind – that your thinking is exactly like my thinking. That we have different bodies is obvious to anyone with eyes, but that we have different minds – different ways to understand the world – is bloody hard for a culture that respects individuality and choice so fucking intensely. So if someone thinks different, it’s scarier than if someone has a cough, it makes us question our own assumptions of equality (and homogeneity).

Over-medicalization of mental difference is a symptom of our fear of other peoples’ minds. Which, again, isn’t to say that this difference, when big enough, doesn’t cause some actual problems, just that we’re probably over-sensitive to the difference that is permissible, because WTF DO YOU MEAN YOU THINK DIFFERENT THAN ME WHAT THE HELL IS THAT?!?!

Paddington Bear is really an allegory about illegal immigration policies. Peter Pan illustrates the dangers of arrested development in boys. Did Mr Banks pay all the appropriate payroll taxes when hiring Mary Poppins?

Where does the madness end?

That animated gif is worse than the blink tag.

Authorship is always going to be problematic with the Pooh corpus.
http://homepage.ntlworld.com/rsposse/pooh.htm

My god that formatting is awful. The web was designed to SCROLL.

I really really hope that some of the designers I work with don’t see that page. I will have to implement it by the end of the week if they do

I always thought Pooh Bear was simply a Taoist.

The tradition of using Pooh as a satirical tool is at least 50 years old. The Pooh Perplex Critique of Sigmund Freud Frederick Campbell Crews (born 1933) is an American essayist and literary critic. Professor emeritus of English at the University of California, Berkeley, Crews is the author of numerous books, including The Tragedy of Manners: Moral Drama in the Later Novels of Henry James (1957), E. M. Forster: The Perils of Humanism (1962), and The Sins of the Fathers (1966), a discussion of the work of Nathaniel Hawthorne. He received popular attention for The Pooh P...

The flinging of poo, of course, is an even older critical device.

A related issue I’ve noticed is that, during early school years, girls seem to have better coping skills and social skills than boys. As a result, vast numbers of boys get labeled with ADHD - or worse - when they’re really just being boys. It’s one good argument for sex-segregated education.

I’m pretty sure everybody I’ve ever known is nuts. I am. It’s part of the human condition, is it not? Tough to be self-aware in our current world and NOT be nuts, in some way. It’s all good.

Pooh doesn’t have an eating disorder. He’s trying to fatten up so he can hibernate without starving to death. Also, time for another Heritage Moment.

Did Mr Banks pay all the appropriate payroll taxes when hiring Mary Poppins?

Say what you will, but Mary Poppins was at least as much about class politics as Downton Abbey. For example: