If you live in a repressive, corrupt state where the reins of power are in the hands of ruthless, greedy elites

Discussed over 10 years ago at your friendly hacker congress:

Just in case someone doesn’t want to watch videos and is still fond of reading:

Just in case someone doesn’t want to watch videos and is still fond of reading:

Welcome to the world of tomorrow | Knowledge Brings Fear

Thank you so much. I have been looking for a transcript for ages. Would you also have a transcript of “10 years after we lost the war”, by any chance?

Revolutionary technologies such as Morse Code and ROT-13?

Nope. You could ask @frank_rieger on twitter, or drop him a line via mail.

I also think speech-to-text might be some kind of option. Maybe even YT subtitles. Never tried to extract them.

In addition to being an extension of our nervous system, the net is an Agora - a public square where ideas and emotions are shared and change may foment - which is why repressive authorities usually do things like ban gatherings etc. in public squares; and we see the same efforts being applied to the net.

Also: “Once we have surrendered our senses and nervous systems to the private manipulation of those who would try to benefit from taking a lease on our eyes and ears and nerves, we don’t really have any rights left. Leasing our eyes and ears and nerves to commercial interests is like handing over the common speech to a private corporation, or like giving the earth’s atmosphere to a company as a monopoly.” - Marshall McLuhan, Understanding Media (1964)

It’s kinda important to know what we’re losing before it’s been lost - makes it a little easier to defend and use it to protect ourselves and others - and stuff like that.

Cory’s title is made up words, but wasn’t proofread.

It’s probably useful to note that the Shah’s torturing Savak secret police in Iran were outwitted by Khomeni political “sermons” that were passed around on cassette tapes. “Samizdat” in the Soviet Union was with photocopiers.

Egyptians were willing to take such risks in 2010, and not, just a few years later, because it got them Morsi instead of Mandela. Once they decided to stay home and put up with secret police, all the Twitter in the world did Egyptian freedom no good.

One could make the argument that it was a revolution. But like most revolutions you just end up with a DIFFERENT bunch of assholes at the helm of a state that is at a fundamental level is not very different from the old one. So we have Amazon and Facebook instead of Sears and CBS, but it is still a small group of people telling us what to buy and think. I’m old enough to remember when the internet was supposed to usher in a new, distributed world of information that would free us from the shackles of corporate media.

I’m pretty sure the Internet is built on actual technologies, not made-up ones.

My thought was the OP was an old Mondo article from even longer ago.

What the Internet Is For 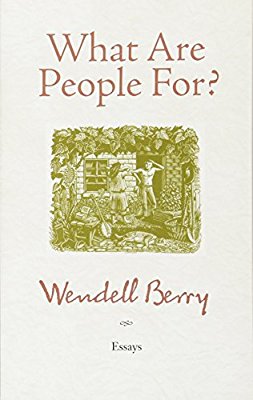 What Are People For?: Essays