The launch trailer for 'Titanfall 2: Become One' looks amazing

These were just fantastic

[quote=“jeffreyfisher, post:16, topic:88158”]
That’s offline rendered.
[/quote]To put it another way - It was made by BLUR studios, the same chaps behind…basically every awesome CGI trailer you’ve seen for a video game. And also the Deadpool movie.

[quote=“Grey_Devil, post:20, topic:88158”]
Yeah the person is fully motion captured, regardless if it was in-game or a cinematic.
[/quote]I’m not so sure - Blur have done some pretty bloody amazing animation work in a similar style, no mo-cap necessary. But hey, it might be, I’m far from an expert on animation - is there anything that tips you off specifically to it being mo-cap?

Yeah, but it’s supposed to be like that. Pure run & gun. Stories? Who needs 'em? Especially when they lead you round by the hand and you can just hide behind a wall til you heal. Max Payne is fucking hard. I’ve still never finished it without using the weapons cheats.

Pre-Ordered. My Destiny clan will have to join me.

This looks awesome… but is it in-engine footage? actual gameplay? some scenes it sure looked like it was in game, but… dayum

They did an open multi-player tech test about two months ago where anyone could play a bit for a couple of days as they worked out networking stuff. Visually, it looked pretty good.

I longed to play the first one when it was announced but I’m not really into online multiplayer so was disappointed when I discovered that there was no single player campaign, now they appear to have rectified it but made two horrifying mistakes IMO- They could have picked any song they liked but instead they decided to rely on borrowed interest. As someone who has listened to the Kill Bill soundtrack a stupid amount of times it churns my stomach to hear a version with mutilated lyrics unnecessarily changed to fit this scene (The Audibullies made a similarly terrible version a few years back). I had to mute it and just watch the pretty visuals. The second big nono for me is seeing the titan with “attitude”, like the stupid gun mechs in Matrix 3 or any of the dildobots in Transformers (Transformers is the worst thing on Earth btw). Stop giving robots attitude please. The robotic interface of the ship in Flight of the Navigator sounded cool and computery until he decided to become more palettable by listening to the radio then becoming a wacky morning radio DJ, Jesus Christ can’t we learn our lesson? I dunno, maybe I’m a 30 something grumpy man being annoyed at things aimed at 12 year old twerps but deep down I know I’m still a 12 year old twerp who likes games.

I think i might’ve enjoyed the first Titanfall game quite a bit but with all the exclusive shenanigans and no single player campaign i took a pass. The upcoming game looks more interesting, and i never really got any feeling that the mech had an attitude of sorts. It’s just programmed to defend the pilot and i never read into it more than that. Not saying you’re wrong of course, i don’t get that vibe.
My hope is that the campaign won’t feel tacked on like similar FPS games these days. I suspect that might very well be the case, but overall it looks promising. Would i play it? Probably not, but my time lately has been pretty limited.

Ugh, I can’t stand the platform exclusive bonus bullshit. I was so keen to play Arkham Asylum when it came out but then discovered that a PS3 extra was that you got to play as the Joker in an extra level. I was like “So… this is 90% of a game then? I’m never gonna be able to play the last 10%?” So I waited years until it was in the bargain bin and then enjoyed it but still with a bitter taste in my mouth like “Hey fuck you people who have an xbox, Sony slipped us some dough to make your experience slightly worse”. They did that with Destiny but the xbox people eventually got to play the missing levels a year after release for no extra cost which is better than nowt (still pissy though).

Titanfall 2 may well be great, it’s just the cheesy slow mo swagger with gun over shoulder walking into the sunset that makes me wince every time I see it. I could just puke nacho cheese. It’s a giant gun, not a boom box. You’re an emotionless precise killing machine, not a rude boy dang it. 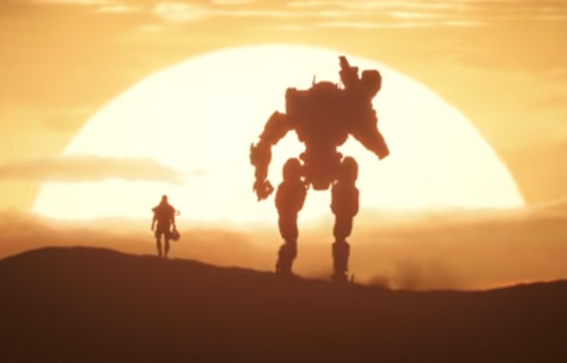 That one about the AI exosuit that defied its direct commands in order to save the unconscious pilot within it seemed like the kind of bad attitude I can handle, although I’ve not played it yet.
The Fall

You’re an emotionless precise killing machine, not a rude boy dang it.

Based on playing so far, I’m pretty sure BT, the titan, has emotions.