The most common job in every state

I see “slave” was omitted for the obvious reasons. 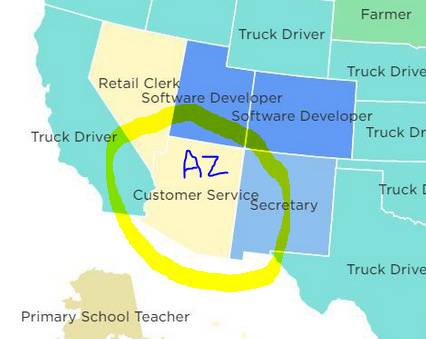 I doubt there are more truck drivers than other professions if you categorize jobs the way normal people would.

Please, there is no such thing as “customer service” in Arizona, everyone knows this.

How’s the broth in Hawaii?

Interesting to see the jobs destroyed by automation and outsourcing almost literally evaporating on the map. Also, interesting: nothing much taking their place. We’re constantly told that when the old, obsolete jobs are destroyed, new, better jobs will take their place, but it does’t seem to be happening for much of the US.

They even admit they omitted managers and sales people from the list because those categories were “too broad”.

I was only 7 when being a “carpenters” overtook “secretary” in Maine in '88. Their retribution was brutal when they took back the title in '89, but 88, what a year.

They will never automate the job of “software developer,” because computers faint at the sight of ones and zeros. Even a curly bracket gives them the heebie-jeebies.

When I worked in customer service for the trucking industry (not in Arizona, ironically) I talked to two different truck drivers who were former anthropology professors. Both told me driving a truck paid better. And I know a librarian who quit to go into trucking.

Best evidence that computer intelligence has surpassed that of humans, right here.

Just wait until software developers eliminate both customer service and trucking as categories.

Then it’s back to primary school for all of us…

They even admit they omitted managers and sales people from the list because those categories were “too broad”.

Accurate, but it still stings.

/looks down at belly

No. I’m just broad enough that I can use my belly button as a suction cup for my can of beer. I tried using it for other peoples’ beer, but they got really mad.

I think the data has been skewed badly here…are they really saying that there are more drivers than burger flippers, cashiers, loaders etc?
That’s clearly not right.

I think the data has been skewed badly here…are they really saying that there are more drivers than burger flippers, cashiers, loaders etc?