The naked hypocrisy of Game Of Thrones’ nudity

Powerful people have been using beautiful people as props for their own amusement since the first powerful person.

That description is as apt about Westeros as it is about Hollywood. 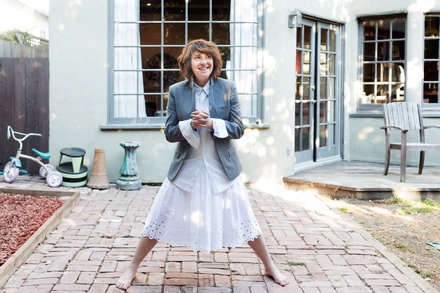 The organization will ask state and federal agencies to look into what it calls rampant and intentional gender discrimination in recruiting and hiring of female directors.

In our society, women have more titillating areas (pun mostly unintended), so it’s not exactly fair to say that men are equally objectified in the show because there’s been more John Thomas’s on display than Jane Thomas’s*.

Try counting total numbers of female nudity versus male nudity. There’s absolutely no way you can make the case that men are objectified nearly as much.

*My impression is that this isn’t even true, but of course having the former, the latter is more memorable to me… Somebody needs to actually provide some graphs to put this to bed.

I don’t deny that nudity in the show is used also from marketing perspective, but for the people who read the book it shouldn’t be surprising. There are so many naked women involved in the scenes to underline the humiliations,which they were forced to go through and to emphasize on the lack of equality. In a way, having so many naked female characters without purpose just states the objectification in the world of Game of Thrones. Let’s not forget it’s fantasybook but based on historical novels and draws a society which is on a much earlier stage of its development (in every aspect, including gender equality) than ours.

In the show they are even careful, especially when it comes to nudity of mother figures ,such as Catelyn, so they don’t harm their image in the eyes of the audience

Yeah, the clearly gratuitous T&A was one of the big reasons I haven’t gotten around to watching the show since season 1. I hear it’s “not as bad” now, but I also hear it’s still bad enough.

I already find the books difficult to enjoy when it’s sometimes hard to tell whether GRRM is spotlighting or revelling in the cruelty and sexual violence; I don’t feel a need to watch the show if it’s explicitly pandering to “the pervert audience”.

That description is as apt about Westeros as it is about Hollywood.

I believe It’s an apt description for all humanity. The difference here is that Hollywood (if we can lump the entire entertainment industry in to that term when we know it’s not all) is hiring people for non prop positions in a way that is discriminatory where as the powerful are usually quite open about who they hire to be arm and eye candy and are honest about it.
I think Hollywood’s problems are another fight entirely

So true. And as the series continues it becomes more obvious. And as a straight male who loves naked women I’m finding the double standard extremely annoying and egregious. It is a great series that does not need to pander.
Oh, and and BTW Jorgen I love feminists. Feminists rock!

The total number is inflated by the fact that there have been lots of scenes in brothels (and in those scenes there’s still been plenty of male flesh on display), it’s perfectly normal in that situation given that the clientele are outnumbered, and so not in the slightest bit hypocritical. There have also been numerous sex scenes with no women present at all.

Ah, yes. Good point. It’s a brothel, so all that girl-on-girl action wasn’t fanservice at all.

In other news, Apologist apologizes.

that dragon is naked!

According to wikipedia, Hypocrisy is the claim or pretense of holding beliefs, feelings, standards, qualities, opinions, behaviors, virtues, motivations, or other characteristics that one does not actually hold.

What standards are claimed by GOT but not actually held?

I’m not familiar with the show, but (according to a Straight Dope I once read) they shaved and wore merkins back in the days of yore.

And as a straight male who loves naked women I’m finding the double standard extremely annoying and egregious. It is a great series that does not need to pander.

The pandering is kind of painful.

Look, this isn’t the 80’s. The pervert audience has a whole internet to fap to. HBO doesn’t need tits to sell its make believe dragon fairy magic dorkfest.

And yet a great deal of thought and work goes into the armor, weapons, etc.

Not in any kind of historically accurate way. It’s a mishmash suggestive of all kinds of different times and places. It’s medieval and roman and renaissance all in the same room. At what modern salon does Petyr Baelish get his hair gel?

I hate to be That Guy, but like, Game of Thrones isn’t set in our world’s “past” just because the setting looks like it, at least in part.

I can agree with the concepts that the nudity is too gratuitous mostly, but you’re putting it in a container of your own creation, rather than applying actual logic to the situation. I mean look, it’s not Earth. They have Winter that lasts for a decade, Summer that can last even longer, Dragons, Magic killer shadow babies, zombies and the thing that you can’t deal with are boobs and girls with a trim bush? It seems a bit like searching for a problem.

You make some good points!

it’s sometimes hard to tell whether GRRM is spotlighting or revelling in the cruelty and sexual violence;

It’s an impossible question to resolve, because it’s so damn subjective. One feminist can look at a nude scene and see male gaze pandering, where another might see a dark but poignant observation about the subjugation of women in Westeros. It’s not about the scene itself, it’s how it makes you feel.

But shows like GOT take advantage of this ambiguity to try to get away with “celebratory objectification” while claiming that it’s not intended that way. And since nobody can really prove anything when it comes to art, they can play right at the edge between celebration and critical depiction. This way they can reap the commercial benefits of pandering while maintaining a claim to artistic integrity.

I do think that the depiction of patriarchy as an oppressive reality in GOT is a valuable and legitimate thematic element, and that includes objectifying nudity. I don’t feel right condemning it as strongly as the article does. But it is kind of annoying when watching the show to have to question “is that woman naked because it means something, or just because the producers know that I like seeing tits?”

I learned from this article (because it was stated numerous times word for word) that to women “dick is abundant and low value.” The Dickonomics of Tinder – Matter – Medium

Yes, women are using Tinder to get laid. No, not with you.

I disagree that HBO has made it a staple. Newsroom, VEEP, Silicon Valley have no nudity to speak of or intense sexual scenes. True Detective had two types of nudity/sexual situations…some were plot driven such as the naked victim’s body on display as they walk through the crime scene, and others were character driven like the scene between Harrelson’s character and his mistress or Rusty and Maggie during their moment of her infidelity.

Even Sex in the City who’s story clearly revolved around singles sexual encounters and relationships was not gratuitous in how they approached nudity and sexual situations.

So I do not pin this on HBO as a whole…But I do pin it on Game of Thrones production.