The new VW California van you can't have in California

I’m still waiting for them to make the electric Bulli.

there were VW bugs for sale in Mexico until a few years ago. Not allowed in the usa for safety reasons.

Maybe this is the reason? You know, there might be an actual logical explanation for this. Or maybe VW just wants to annoy hippies?

It can’t be safety issues. Consider what they do sell in the US.

The Land Rover Defender was unavailable in the US because it doesn’t meet regulations. There was some kind of temporary system that let them be imported in the 90s, so those cost a fortune.

I think the Defender replacement is going to be designed to meet US safety requirements.

Why is the VW California not available in the USA ?

A while ago I read that the VW California is not available in California … or any other US State for that matter.  It’s not altogether clear what the reasons are so I thought I’d …

This article brings up a couple of points, including a chicken tax that goes back to the 1960’s lol!

Something it mentions as being a bit more realistic is the US’s desire to purchase SUVs. All manufacturers are having problems selling vans, and many of them cancelled wagons 10 years ago. While the California will have a strong niche market, unfortunately it isn’t enough to tempt VW right now.

That thing is awesome.
It’s weird how many cars the Germans make that we can’t get in the US - ones that you think would sell really well.
From hot cars like the S4 Avant (my dream car) to diesel versions of pretty much everything, to eco-city cars.

They’re thinking about it:

Volkswagen 'Intensively' Considering Trucks And Vans For The US

Volkswagen is crushing it in auto sales around the world, but their lineup just isn't deep enough for total domination of the US market. A statement by VW's Light Commercial Vehicle boss suggests that might change, possibly bringing Amaroks,...

As I understand it the hold up on these sorts of things is largely down to the “chicken tax” which slaps a 25% tariff on a bunch of stuff. Including “light trucks” which apparently includes certain kinds of vans. While I don’t know that a camper would be directly effected, it would likely apply to whatever platform its based on. Selling a small amount of campers is likely not worth it, selling a small amount of campers and a whole lot of delivery vans might be. The situation sort of scared most foreign companies away from selling anything in related categories away from the entire idea. They’re basically just priced out of the market in terms of the models and kit that make the most money in the category.

That said VW has manufacturing capacity over here, and apparently interest in selling this sort of thing here. So the hold up at this point would be adding/retooling plants to actually produce these vehicle lines in the US. Which just cuts out the stupid tax altogether.

Shipping it from Germany might be less expensive then you’d think. A friend imported a car from New Zealand to the UK a few years back and it only cost a couple of hundred pounds.

I was under the impression that having seats in the back was sufficient to avoid the chicken tax, which doesn’t apply to passenger vans. That’s why all Fort Transit Connect’s are imported as wagons, and then some have the seats taken out of the rear, and the rear side windows replaced with steel so that they can be sold for carrying cargo.

Actually that’s not entirely true, as not too long ago, there was a modified Mexican bug for a sale at a luxury used car place near me. I think part of the problem was about the exhaust system, which had been modified (according to the website). It was a 2002, maybe? If I hadn’t just got a new car a couple of years ago…

In the US a car either needs to be safety/environmentally tested by the manufacturer or importer and approved for import or be 25 years old to be legally imported. The testing is too expensive to justify for one, or even small to medium batches, so noone does it for cars that aren’t already imported by the manufacturer. And, well finding the 25 year old equivalent of this is basically gonna gonna get you a Westy.

I’m willing to bet its more about the platform its based on getting dinged. As many camper vans as they may sell, its likely not enough to justify the cost and difficulty of importing just the camper van. We don’t do a lot of small campers and conversion vans over here. We’ve got big roads and national parks, so even our cheap campers can be huge by Euro standards. But sans chicken tax you could import the vans as vans and sell tons of the damn things. The camper/conversion whatever version is just another niche to exploit as part of your new US van business.

They’ve also closed a lot of the loopholes in regards to the tax. Apparently to get Turkish made Transit Connects into the US Ford has to manufacture them entirely as passenger vehicles, not just add an extra row of seats. Then strip them and re-do them as delivery/work vans. Which is just the stupidest thing I’ve ever heard.

As I understand it the hold up on these sorts of things is largely down to the “chicken tax” which slaps a 25% tariff on a bunch of stuff. Including “light trucks” which apparently includes certain kinds of vans.

The chicken tax is only applies to commercial vehicles, and not passenger vehicles. It is often avoided by adding seats to vehicles that otherwise wouldn’t have them, and then removing them once they arrive. Transit Connects and Sprinters intended for commercial use are fitted with cheap seats at the factory, shipped to the US as passenger vehicles, and then the seats are removed and junked as the vehicle is converted back to commercial spec. 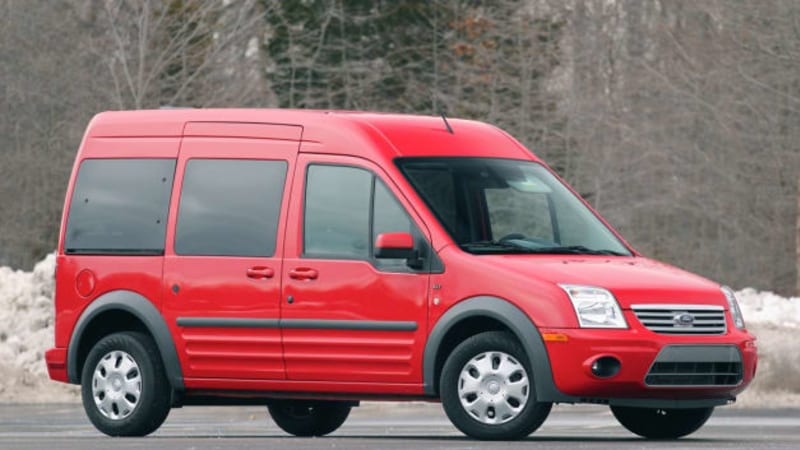 Ford is in a bit of a pickle for importing and selling Turkey-built Transit Connect cargo vans as passenger vehicles in the US, then converting them to commercial-vehicle specification stateside in an effort to bypass a 25-percent tax imposed on...

U.S. Customs and Border Protection have taken issue with Ford’s importation practices for its Transit Connect van. Read more at Car and Driver.

I suspect (California) emissions standards and US DOT safety requirements are the major holdups.

Europe usually has more stringent safety and emissions standards than the US, though certain changes do often have to be made. But a lot of the time its really down to getting the testing done. But whatever the chicken tax is supposed to apply to in practice it apparently knocks out whole categories of vehicles, often in really weird ways. Like light pickup trucks whether they’re intended/practical to be used commercially or not. Its a weird stupid thing that makes no sense.

I just don’t think there’s enough camper van business to justify importation (or local manufacturing) on VW’s part without all the other related vehicles that are sort of in the same market sector also coming over. So while the chicken tax probably doesn’t apply to the California, it kills everything else that would make bringing VW’s truck/van/commercial business to the US. Basically we buy a lot of pickup trucks here. And nearly as many commercial vans. Without those sales to subsidize the division that sells camper vans its not really worth it to try. But like I said they’re apparently interested in finding a way to do so. Which likely means manufacturing some some set of these products in the US, at which point I don’t see why camper vans wouldn’t be a thing as well.

Huh - that is a neat design. Bring them over so I can get a cheap one used in 10 years.

The European Sirocco that isn’t for sale in the US is totally sweet, too…

I felt robbed when I learned my Honda Fit is sold in Europe with glass roofs and all wheel drive!

I grew up with Volkswagen buses and vans! Both of my parents owned them at various times.

And now you know why I never bothered to learn how to drive.

Yes, it looks shiny, but how does it do on The Grapevine?

Europe usually has more stringent safety and emissions standards than the US, though certain changes do often have to be made.

That’s just not true, and not that simple. The regulation regimes are different, prioritize different things, and there a re a lot of places where the US is stricter.

From an emissions perspective, the US is much stricter on NOx than the EU is, and this goes a long way to explaining why diesel powerplants rarely make it to the US.

The Future of Diesel in the US: Analysis

Concerns over fuel economy and carbon-dioxide emissions have left many wondering why more cars with diesel engines aren't available in America. It comes down to intrinsic differences between U.S. a...

The 50-state light-duty vehicle limit for emissions of nitrogen oxides is 0.07 grams per mile. In Western Europe, the limit is 0.29.

US standards with regards to safety are also stricter in some aspects (such as the historical 5mph impact bumpers, prohibitions on certain types of headlights, side-marker requirements, etc.).