These boxes aren't moving - an optical illusion I can't explain

Holy shit. This is so much more profound than “your eyes are dazzled by weird effect.” This is a whole-brain illusion, involving conceptual interpretation of symbols and how these high-level concepts drive our interpretation of physical reality. Stunning.

ETA: Scratch everything I just wrote!

You aren’t seeing the movement because of the arrow. As mentioned in the summary, the boxes move even when the arrow is covered. What’s happening is that the boxes are flashing in a very complicated way that causes this illusion and the flashing changes to cause the box to change the illusory motion.

Basically they are sweeping the light across the dark of the box lines in different patterns.

It isn’t based on the symbols — you can cover them up without impacting the illusion. If you look closely in slow motion, the cubes aren’t just flashing in black, grey and white, they leave very fine highlights and shadows along certain edges, which is what they’re manipulating to create the movement.

Me opening the post: yeah duh those boxes on the pink background with the question marks aren’t moving what are you on drugs

At the end of the post: ooooooooh thooooose boxes. Just flying in every which direction.

Seriously tho, going back to it, I covered up both arrows and then watched it. And it still did the strange little dance - i saw it do the same directions as if the arrows were there so I am suspecting there’s something else at play here (smoke and mirrors perhaps) that I’m not seeing. Perhaps a suuuper subtle shifting of the black to white that changes direction in its fade?

In the past someone has come along (might as well be me?) and pointed out that the white and black ‘shadows’ on the edges are moving/swapping within the edges. That’s not a case of the “boxes” moving, but it is a ‘subfeature-al’ apparent motion. In anycase probably deserves to be among the top seven impressive gif’y illusions.

here’s an candidate for number eight: 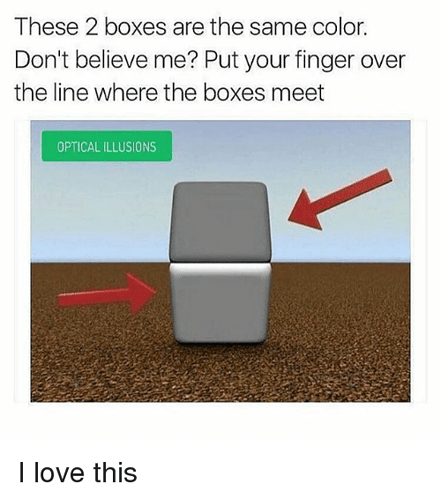 the cubes aren’t just flashing in black, grey and white, they leave very fine highlights and shadows along certain edges

Exactly. The outline isn’t simply “flashing,” it’s switching black to white in a sweeping motion that mimics what the arrows are telling our minds that the boxes are doing.
Cool, though! Very effective!

Yes, confirming that the tonal animation is changing direction each time as well. Looks neat but it’s not just ‘the arrow points so YOU think it’s going in that direction’.

Also took a screen shot of an arrow, put it over the arrows in the gif and it still moved in the original direction that the arrows suggest. 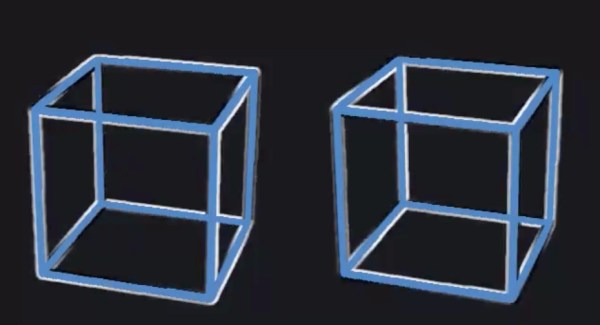 On Twitter, @jagarikin posted this fantastic example of the “reverse phi illusion.” Press play above. The boxes aren’t actually rotating. I promise. From SoraNews24: In very simpl…

Exactly. If you look just at one of the lines, you can see that as it goes from black to white to black it doesn’t instantly go from one color to the next, it instead changes like a moving wave. The direction that the moving wave of color change is moving in is what gives the illusion of movement. Change the wave direction, change the perceived direction of movement.

Interestingly when I’d spent way too long peering at the animated gif, and then came back to the article, the static boxes seemed to be moving to me!

Basically they are sweeping the light across the dark of the box lines in different patterns.

Thanks. Saved me coming here to muse whether the flashing light was directional. It seems it is.

These two boxes are largely the same colour. The lighter shading at the top of the bottom box isn’t. The ‘effect’ of seeing the proof only works when the shading is entirely covered as well as the black line (I tried a very thick paper clip over the black line and nothing changed, until the shading was also covered.)

It’s easy to see what trick is being used by covering the entire video except for one of the box edges. You can see that the white-to-black transition ‘moves’ along the width or length of the line over a few frames of video.
It’s not surprising that this works, and that it’s hard to tell what the trick is.

Yeah, covering up everything but the very edge pixels helped me see vaguely what was going on. I wanted to download the gif and look at it frame-by-frame in Fireworks (yeah, I became a web dev in the early 2000s, what?) but of course a gif is never actually a gif on social media platforms…

That’s why the text says “put your finger over the line”.

“put your finger over the line”

I was more noting that the ‘these boxes are the same colour’ statement is NOT true for all parts of both boxes. One of them has more than one colour! Of course it needs a finger to mask that difference.

As apparent phi movement is perceived by human’s visual system with two stationary and similar optical stimuli presented next to each other exposing successively with high frequency, there is also a reversed version of this motion, which is reversed phi illusion. Reverse phi illusion is the kind of phi phenomenon that fades or dissolves from its positive direction to the displaced negative, so that the apparent motion human perceive is opposite to the actual physical displacement. Reverse phi It ...

(for anyone clicking the wiki link, I should point out that the “Neural mechanism underlying sensitivity to reversed phi phenomenon” section is about flies – we don’t have the mentioned cell types and the mechanisms of reverse phi motion in humans is still unknown)