Based on my research (reading the titles of the pieces), it looks like all this demonstrates is that Europeans realized that Africans were black.

Well that kind of implies there were some around, and I think that’s the point. But Othello doesn’t make sense unless people have seen at least a few black folks, I would think.

We don’t even have to go all the way back to medieval Europe. Even early America was much more diverse than today with interracial marriage being fairly common. But it makes sense that medieval Europe was diverse. The only people with real education, medicine, and free trade were the Muslim nations. If you wanted fine goods, an engineer, or did any trade you would need to go to them. 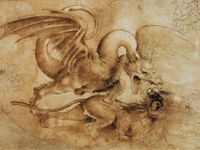 Blogger revealed that dragons are real and their existence has been kept secret by a cabal of racist white scientists.

Remember folks, race is a modern construct. Also, pre-modern peoples moved around far more than we actually think they did.

I am curious if some parts of Europe were significantly closer to the modern stereotype more than others. The Moors ruled Spain, Portugal, and parts of France for centuries. Southern Italy was repeatedly conquered by Arabs and North Africans – leading to racist sayings in northern Italy that Garibaldi didn’t unite Italy, he divided Africa. I think we all know what happened to the Eastern Roman Empire. But… that still leaves northern Europe and Scandinavia.Any ideas on the situation there?

People who were visibly different from the dominant Proto-Indo-European/Neanderthal crossbreeds that we think of as “European” prior to the Roman Empire were well known in ancient times.

By the Medieval era, the existence of people with non-classical features like epicanthic folds and dark skin was known throughout Northern Europe and Scandinavia. Remember the Varangians were Northmen, who often retired back to Scandinavia after they’d filled their pockets with Byzantine gold.

More racially diverse than who thinks? People don’t magically share the same perceptions, and certainly not about events which happened hundreds of years ago.

Also, the MedievalPOC site is thoroughly awesome, and gets the never coveted @Medievalist Seal of Approval.

Of the seven photos featured here, 1, 2 and 5 were paintings of people from centuries after the medieval era (by the time of the painting of Clive of India, the Atlantic slave trade was almost 150 years old), while 4, 5 and 6 depict events in Biblical times (Caspar and the Queen were from the area around Ethiopa, so they’re supposed to be black). 1, 3, 4, 5, 6 and 7 depict people outside of Europe, so they say nothing about Europe’s diversity. The beheading in 3 and the depiction of POC in Arabic clothing seems to be a fairly clear example of war propaganda - Europe had just been through centuries of crusades, so it’s hardly odd that they would know something about what people there looked and dressed like. Dürer depicted a rhinoscerous in 1515, but that doesn’t mean that he ever saw one, nor does it say anything about how common they were in Europe (see also: lions, dragons etc.). Marco Polo was born in the 13th century and the Vikings may have discovered America in the 11th century, so I’m not sure that European medieval knowledge that not everyone was white or European is new news.

This isn’t to destroy the premise that there were people of colour in Europe 500+ years ago, just that pictures like these (also from medievalPOC) seem to be clearer examples of medieval (or shortly thereafter) POC actually living in Europe.