Why no Honolulu and San Juan?

That could certainly explain the ‘Chicago’ number, then:

Principal counties are italicized; others are counties or portions of counties included in the definition.

The ‘Chicagoland area’ stretches into both Wisconsin and Indiana: 9 counties in IL, 4 counties in IN, and 1 county in WI. So sure, if one lives in Jasper County Indiana and commutes in to the city every day, it’s possible to live in a nice sized home on a real lot with an annual salary of around $50K. 2.5-3 hours of commute a day, but a nice lawn and probably a 2-car garage.

Well, they certainly didn’t consider the metro area for coming up with Detroit’s needed salary. Appears they used only the city boundary. Ain’t no way you’re buying a house in West Bloomfield on $55k.

I question what they’re calling the DC metro area borders,

I just bought a house inside the beltway with a family income only a little higher than that. It’s a little bit of a fixer-upper, but not significantly.

I was coming in here to say this. Come to Buffalo, we’re awesome and getting awesomer.

I mean, here’s just one thing to tempt you all:

Depending on where you live the type of home and square footage you can get will be very different.

Yeah no kidding, and there are plenty of other variables this graphic doesn’t factor in.

This article is a few years old, but it has really stuck with me. Luxury real estate in Miami is going to be under water, but buyers/sellers believe that it will be someone else’s issue.

Wow, the first thing that comes to mind when I think of Miami and climate change is gentrification, but that article shows denial is really difficult to overcome with some folks.

there are plenty of other variables this graphic doesn’t factor in.

Yeah, like how inconsistent earnings have become for younger workers, which not only affects the ability to save for a down payment, but also to keep a home in the long term:

as noted above by @VeronicaConnor and others, median home price is a shite metric.
the graphic is also very misleading (also as others have noted) and here is my gripe:
the area indicated for “Miami” seems to cover everything from Palm Beach county to Key West (Monroe county) which would include such depressed areas as Hialeah, Opa Locka, Florida City and other south florida cities, as well as Miami Beach, Hollywood and Florida Keys, where the reported “median” price is well over $1mil.
now i am just a simple Keybilly with annual income far less than the $103k listed in the graphic yet was fortunate enough to buy before the bubble.
but, here’s the deal - this island may have appreciated 30+% since Irma wrecked the upper keys, but we ain’t gonna float long. home owners being underwater (literally) will become more real the further we burn this planet and boil the seas.
why the land speculation shell game in south florida of ever-increasing price and the last sucker holding title still goes up, i just don’t know. that’s all it seems to be - a game to some. am i that “last sucker holding title”? goddamn right i am. i just hope Dear Brother can offload this land after i’m gone. i’m not leaving.

For my own edification, I went here: Personal Income by County, Metro, and Other Areas | U.S. Bureau of Economic Analysis (BEA) to get some data about personal income to compare it to what the article says about housing costs. Then I joined the tables and did a scatter plot. Here it is: 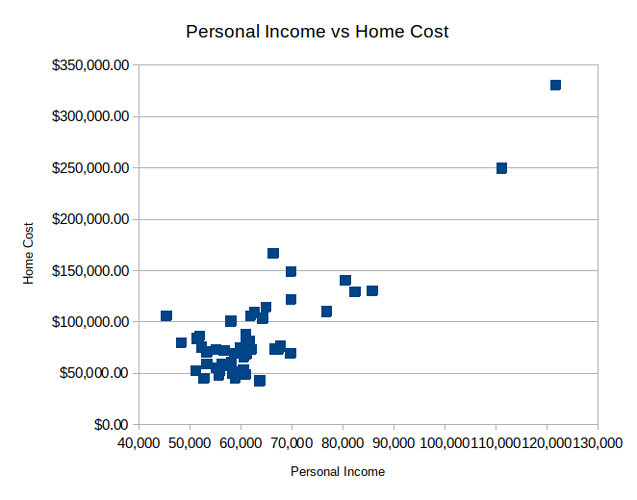 image663×520 20.1 KB
I’m too lazy to sketch in the y=x line, but you can see how that’s important. It’s where the amount that an average person need to make matches with what they actually make. (There may be some mean/median mixup in this, I’m not quite sure how one of these series is defined.)

Anyway, you can see in the lower left people both need and make ~$50K, which is fine. However, as a function of personal income, home costs rise with a slope greater than one, which isn’t that great.

Once again, it looks like Pittsburgh wins as people make $63K there but you only need $43K to get a home.

Median seems like a poor choice for the metric what you need to buy a home. Something like the top of the bottom quintile or quartile that had sustained availability over the year seems more reasonable for that title, or maybe the lowest consistently available price. There really is no median property and what you need to buy a home is very different from what people spend on homes, which is what the median better captures. To get an example Cleveland hasn’t had a shortage of homes under 30,000 for decades. If you know what you’re doing the 10,000 range is still possible, though far less common than in years past. If you climb up to the 50,000 range you can get some in good shape and rather close to the city center.

So yeah, Cleveland is a bad example, but you can do the same in Chicago. There’s a bunch of really rough homes around 30,000 and you can get to some in pretty good condition around 75,000 and that is without going out to the deep exurbs.

There are huge tracks of land on the South and West Side of Chicago that are available for <20K per lot. That drives the overall price down. These are also very violent areas with absolutely no development, for now. I have a feeling that corporate real estate funds are going to start buying them up and pushing existing residents out in order to capitalize. Should be interesting to see if corporations can use money to push out gangs in order to gentrify. Already see the gangs moving out to the suburbs and assume that will continue.

You might want to look up Redlining to understand the historic reason for the lack of equity value in those areas of the city.

The city I live in just North of Chicago is one of the first in the country to offer “reparations” for redlining, so I am very familiar with that egregious practice that has led to many of the issues minority communities have today.
Nevertheless, my statement about how this particular website’s algorithm says you can buy a home in Chicago with a ~75K income remains true. Chicago neighborhoods have huge discrepancies in housing costs. That redlining and other issues have caused these discrepancies is well understood and not the point of my original post.

I wouldn’t think that a plot of empty land would count as a house in this study.

I don’t know… after all, 38.5% of any statistics quoted to make a point are made up on the spot.