This mind-melting optical illusion is called the Hermann grid

Different concept at play here I think but equally as maddening to look at. 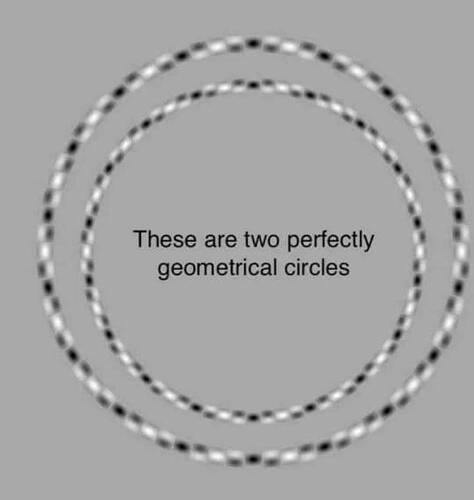 I don’t get this at all. The right vertical line has dots in-between the vertices, the left side does not. What am I missing?

Not sure how mind-melty this actually is. The fact that a black dot is more prominent when situated in the middle of a skinny line rather than at the convergence of several of them seems pretty obvious. The illusion of black dots appearing at intersections of white lines is way more surprising, IMO.

What I saw was black dots appearing at the intersections of the lines on the left, but only when you focused on them, in my peripheral vision they disappear.

There are also much smaller dots that seem to be involved in creating the illusion.

It’s rather elegant in its conservation of dots. The dots appear at any intersection you look at (on the left), but the rest of them are hidden from your brain. Hard to prove there’s more than one (or very few) dots on the left.

Dots had to evolve this camoflaging ability to survive predation by their chief nemesis, eyeballs.

Heisendots. They only appear when you observe them.

It’s easy to see all three columns at once on the right…on the left not so much.

Ah, now I see it. I blew it up it 300% in Photoshop (see below) but then realized I hadn’t click on the image in Twitter to see it zoomed out to normal size.:

This one really hurts my brain. I had to trace each circle carefully with the mouse pointer just to make sure; I couldn’t trace them at all with my eyes without getting lost.

Agreed. I did similar tricks, including blocking out half the image with an envelope, which helped a little.

Still gave me eye strain though.

If you cover up everything but the top horizontal line, you’ll see that there indeed dots all across. This also works vertically.

If I shut one eye and block half the grid with one hand and follow each line up from node to node, I can see each of the black dots.