Originally published at: This physics professor is becoming a TikTok star for her cool demonstrations | Boing Boing

Finally, some news from back home that isn’t a massive embarrassment. She’s a great professor who’s really dedicated to her students.

I knew I’d seen that demonstration before: 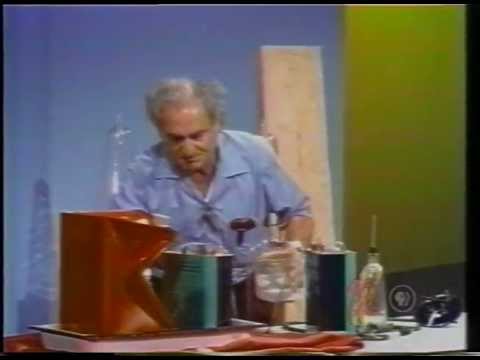 Love her enthusiasm, though! Anything to get people interested in science!

I grew up watching JS-M and he was the first person I thought of after watching Dr. Erukhimova. Enthusiasm and passion counts for so much in teaching. She’s awesome.

I discovered Julius Sumner Miller recently while watching “The Hilarious House of Frankenstein” on Tubi. I probably wouldn’t have watched more than one episode if it weren’t for the segments with this physics demonstrations. They were really entertaining and informational, even for a guy who was born year the series ran. Plus, it has Vincent Price, who was always great.

I still remember the Euler equations, the Cauchy Equations, and the Joukowsky transform for the aerofoil since my degree, many years ago. I believe the maths, but some ‘common sense’ deep within refuses to be told.

As fun as these demos are she is wrong about Bernoulli. Only one of three conditions needed for Bernoulli to be applicable is present and that is that the flow is somewhat steady. A second condition needed for Bernoulli is that the flow must be incompressible. The speed of the air flowing out of the hair dryer is not nearly high enough for the for this to be true. For air to be considered incompressible its speed has to approach the speed of sound. And the third condition needed for Bernoulli is that the flow must be non-viscous. While the air stream coming out the dryer is steady it is turbulent. As it flows out of the dryer it also affects the air around it, due to friction, and pulls the air around it creating a column of air of larger diameter than that of dryer. Around the ball there is a boundary layer of slower air flow caused by friction at the surface of the ball. It is actually the increased compressive dynamic pressure of the moving air on all sides of the ball that keeps it entrained in the column of air.

Bernoulli’s principle may be the most abused scientific principle out there. And this “demonstration” is unfortunately only one of many that start with a misconception (“faster moving air has lower pressure”) and proceed to draw incorrect conclusions from this incorrect premise.

A correct statement of Bernoulli’s principle is that “when a fluid flows from a region of higher pressure to a region of lower pressure its speed increases”. It cannot be used to compare the air flowing out oh the hair dryer and the ambient air .

Sadly, this is only one of many incorrect demonstrations of Bernoull’s principle. Put a pressure meter on the front of the hair dryer and you’ll see that the pressure is ‘‘the same’’ as the ambient air. “faster moving air has lower pressure” is a mis-statement of Bernoulli’s principle. The “analysis” that follows from this incorrect assumption is likewise false.

See the wikipedia page on Bernoulli’s principle and follow the numerous links to peer-reviewed published scientific papers that debunk this persistent myth.

I taught a lot of 4th through 6th grade science and I’m proud to say I used both of those demonstrations. Basic physics can be a lot of fun.

Bernoulli’s principle may be the most abused scientific principle out there. And this “demonstration” is unfortunately only one of many that start with a misconception (“faster moving air has lower pressure”) and proceed to draw incorrect conclusions from this incorrect premise.

There’s a saying in science education that each year you are taught that everything they taught you last year was wrong.

These are grade-school demonstrations, so the way to think about them is as “animated diagrams”. The exact physics happening in the experiment being done don’t have to be exactly correct to communicate the idea to students in an effective way.

I agree it’s best to minimize creating and spreading misconceptions as much as possible, but there’s a tradeoff of overburdening kids (and many adults) with nuance that they aren’t ready for and/or wouldn’t pay attention to in any case.

Is this a children’s site? I was unaware of that. I’d always thought that this site was aimed at educated adults. (I also disagree with lying to children - a simplified explanation is fine, but one that is just plain wrong is not. This one is just plain wrong. )

Anyway, do you have a science editor who could take look at this?

Also, it would be nice to approve the post that was nuked by your bot because (apparently) I cited a peer-reviewed published scientific paper that debunks this unfortunately common piece of non-scientific folklore.

Perhaps you should direct your complaints to Texas A&M University?

Is this a children’s site? I was unaware of that.

Easy there friend. I was saying her tik tok content is likely intended for grade school kids.

I also disagree with lying to children

Take it down a notch. There’s lying and then there’s speaking to people where they are. Are you an educator of young kids?

Anyway, do you have a science editor who could take look at this?

Who do you think I am, exactly?

Also, it would be nice to approve the post that was nuked by your bot

I am not a moderator here.

I humbly suggest you take your tone down a couple of notches. Everyone here is discussing in good faith and we respond well to mutual respect.

It’s worth pointing out that she is bringing a great deal of positive attention to TAMU. Publicly probably moreso than many others in that department.

Yet, as an “Instructional Professor of Physics” she lacks the protections that come with a tenured position. As contingent faculty, her 20+ years of service, six university-level teaching awards, and tens of thousands of dollars in teaching-related grants do not protect her from the fact that she can be let go at a moment’s notice without any due process.

Apologies, I thought you were a moderator, I don’t know whether you are a science editor. I don’t see your name on the masthead, so I have no idea. Perhaps you could clarify.

I do not educate young children. I do educate adults, on this subject. Thanks for asking.

I would respectfully ask one of the editors to take a look at the peer-reviewed published scientific papers on the subject and ask if promoting this video is in line with your editorial standards regarding misinformation. If you are one of the editors, then go for it.

A good place to start would be the wikipedia page on Bernoulli’s principle. Follow the cites.

I’d invite anyone else to do so as well. Might be a good learning opportunity.

Being relatively new here, you might not yet have a full understanding of what this BBS is, or what this site does. Which is, of course, fine. Everyone is new everywhere at some point or another. I’d suggest looking at the FAQ, and maybe scan through a few posts. You’ll get the hang of the culture soon enough, but the shorthand is that that are a group of folks who post interesting, thoughtful, silly, stupid, crazy, whatever posts on the front page. They aren’t guaranteeing the accuracy of what they’re linking to, nor generally making a recommendation of one kind or another, other that to say “check out this cool thing.”

There are also topics started by the regular readers, which you can find here.

In the comments sections, the Mutants (as the regular readers here are generally known) might correct, contextualize, or strenuously argue for or against whatever is in the content. It’s important, though, to keep it civil, and to keep in mind that nobody here is responsible for any content except what they themselves post. If you think something in a post is inaccurate, you can say so and say how. Another Mutant will likely come along and expand upon or refute what you’ve written. Maybe not. It ain’t personal. Among the regulars is a pretty wide array and depth of expertise–from lawyers and doctors to chefs and gardeners, to all manner of income and education levels. The site sees regulars from around the world. That’s part of what makes it fun.

ETA: And here is a big ol’ list of categories and topics:

Thanks for the welcome. While I’m new to the BBS, I’ve been following boingboing since probably around 2000. I’ve always appreciated that the posts on the front page (boingboing.net) get the science right.

I was only motivated to comment because this post clearly does not. Perhaps the comments section is the wrong place to get the attention of the site editors, but I thought it was worth a try. I’ve contacted them directly so maybe they’ll do something about it.

I think if you’ll read upthread you will see that my first comment and first reply were simply factual statements regarding the scientific basis for the video (i.e. it gets the science very wrong, as explained in several peer-reviewed published articles).

Perhaps others will disagree with that. I would only hope that they would respectfully consider the evidence. The science speaks for itself and is quite clear. I’d post links, but the UI prohibits that.

You’re picking a very oddly specific hill to die on here, dude. It’s a tiktok video for kids about some fun effects to get them excited about learning. It doesn’t need to be rigorously scientifically correct.

If your standard for BoingBoing is “must be rigorously scientifically correct” then I assume you lodged similar protests in every story about health, nutrition, alternative medicine, UFOs, and various other things that are regularly posted here. This is not a science journal. It’s a pop culture aggregation blog.

If you educate adults you must surely simplify fundamentals based on their background and level?

The presenter in these video very much understands what they are tweaking to hit their target (tiktok) audience. Better Science literacy in the general population is important (in general), and not everyone needs to learn the details required for a career in the field. (As an extreme example, Would you start basic chemistry by learning orbital probability density functions?)

I teach biology/genomics and its very common to teach the fundamentals in a slightly different / flipped manner to get people to grasp the idea. We then build on that with more complexity. Sometimes a concept is just way to complex to start from the accurate picture.

If I taught undergrads at the level I expect from a graduate student, they would surely do poorly (which reflects on me, not them).