The flight from my easy chair to my refrigerator is always first class and no delays.

There’s definitely a skill to it; I’ve tried to work the system and tie together destinations that seemed like they’d be cheaper based on GFlights, but the airline algorithms sure do try to fight handing out deals.

OTOH, I had to giggle looking at the map of Europe header image; Ryan Air covers almost everywhere and no flight is over $15. It’s re-goddamn-diculous.

The private browser sometimes works, other times i didnt notice much of a difference

these tips are good if you want to get to a given destination and don’t care what week you get there and fall into the category of air quote “tips” slash air quote otherwise.

The private browser sometimes works, other times i didnt notice much of a difference

Seems like spurious correlation to me. As you get closer to the date of the flight, the price may or may not go up whether or not you are in private mode.

Have you done this with 2 machines side by side, one in private and one not displaying different prices? That seems… Like it may not be legal if you can demonstrate it consistently.

I do like to check via a private browser just to see if prices change but I can’t recall seeing differences come up often. Maybe once or twice. Still it’s useful to check all places, including directly with the airline

i was so excited and positively challenged when i was hunting for flights for a once-in-a-lifetime trip about a year and a half ago. turns out getting great deals on decent flights is a walk in the park compared to trying to get tickets refunded due to a pandemic that was in full swing but not yet uniformly acknowledged.

I had a few family members that had to deal with that too and had a hell of a time getting the tickets refunded. Airline kept trying to get them to just reschedule the flight instead, it was a fight that took months.

rying to get tickets refunded due to a pandemic that was in full swing but not yet uniformly acknowledged.

The secret there is to fly on the airline of a country with excellent consumer protection. My wife and I were flying to Europe in April 2020, Everything gets cancelled and Aer Lignus (Ireland) refunds my full amount including fees and taxes. My Boss and his wife were flying to Mexico in March 2020 on some American airline and they won’t refund his money. They kept the fees and taxes and charged him an extra fee. Then they gave him a voucher that had to be used by January 2021 (based on the date he purchased his tickets, not the date of the flight). Using the voucher causes another fee. He’s still fighting to get some sort of refund.

I massively lucked out that my carrier cancelled my April 2020 flight and they moved me to a flight that departed 6 hours and change earlier, so they had to refund me.

unfortunately i’ve been stranded here in the u.s. for my entire life. airlines i dealt with wouldn’t offer refunds for planned travel even after the pandemic was recognized because the travel dates were in the future and they claimed there was no way of knowing things wouldn’t be better soon (this was april 2020).

yes i think this is the loophole i arrived at eventually, my flight was changed and the policy was that i could opt out at that point only

I’m sorry but I need to play the spoilsport here: this flying around the world like there’s no tomorrow will have to end. Now.

Seriously, we are frying the planet, flying is the most damaging form of transport. 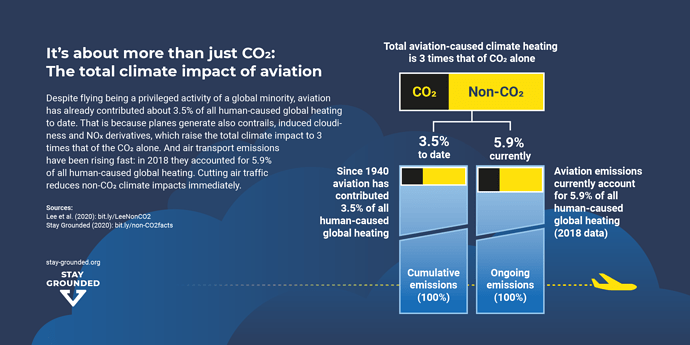 flying is the most damaging form of transport.

And:
Maritime Pollution vs Automobile Pollution
…It has been estimated that just one of these container ships, the length of around six football pitches, can produce the same amount of pollution as 50 million cars. The emissions from 15 of these mega-ships match those from all the cars in the world…

Of course, this doesn’t mean we shouldn’t cut back on needless trips.

Bearware that if you are using an adblocker, it may be blocking the airline tracker so you won’t get much different results.

Interesting, thanks for the link. I’m not quite convinced, however, as some basic facts do remain unclear. Do they just count the total emissions of all shipping vs. all aviation? Without considering just how much is transported? Carrying capacity in shipping is magnitudes larger than in aviation. Also, in those emission figures, the unit is sorely missing. Is it CO_2 or CO_2e? The latter referring to CO_2-equivalents, which include also the effects of non-CO_2 emissions. Most importantly, do the figures account for the fact that emissions high up in the atmosphere, as happens in aviation, lead to a much stronger greenhouse effect, in the ballpark of 3-5 times compared to emissions near the ground? I’m sorry, while many aspects are rightfully addressed (like the use of bunker oil and the almost complete lack of exhaust scrubbing), this piece sounds much like a decoy from the aviation industry saying: “see, others are at least as bad as us!”. It is telling that the article mentions that shipping has been growing steadily, but lacks to mention that so has aviation. When you look at personal carbon footprint calculations, flights form a much larger slice than transporting goods.