To fix or not to fix (a laptop screen)

Hi BB crowdsourcing unit. I need the thoughts of the masses, or maybe just a kick in the butt to get me into gear.

I’ve got a Sony Series E laptop with a broken screen. Looks to me like the display is cracked. If that’s the case it will cost me ~$80 for a replacement screen or ~$160 to make it someone else’s problem to fix. Here are some pics of the tragedy… Anyone know if this is just the screen or could it be the display ribbon as well? So the question is: do I fix it myself or make it someone else’s problem? 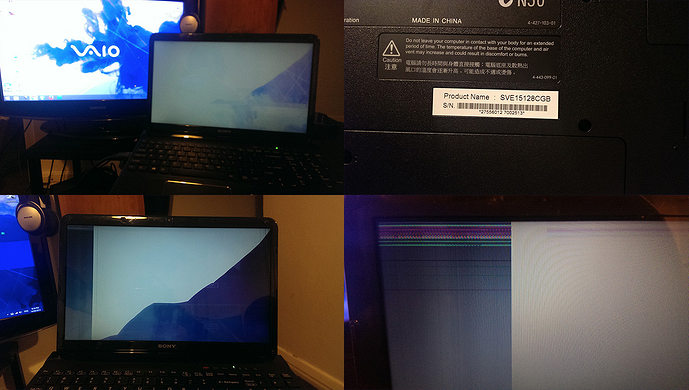 This was caused by the marauding kittehs I adopted. I woke to a the sound of stuff crashing to the floor and they had somehow managed to make a closed laptop sitting squarely on a table crash to the ground, coming to rest in the pool of their drinking water which it fell into. I was not impressed to be woken and was even less impressed the next day when I fired up the machine.

You can never rule out a dodgy LVDS cable until everything is working perfectly; but based on the nature of the incident and the appearance of the result, my vote would be straightforward panel damage.

The main question (which Sony’s…excellent…online documentation is proving 100% useless in addressing) is whether the build style is relatively cooperative or whether you’ll end up breaking a zillion little plastic clips and driving yourself to madness.

If the screen assembly wasn’t designed by abhuman sadists, you’ll just need a decent phillips driver and maybe a spudger and you’ll be in and out in 20 minutes.

If it was, you’ll face a nightmare ordeal of brittle plastics and inscrutable fasteners, and probably spend a nice long while only do damage something.

I haven’t dealt with many Sony units, so I’m afraid that I don’t know where they fall on the spectrum. The panel swap itself is a trivial operation; but I’d do some cautious probing of the panel enclosure and get a sense of how tractable getting it open and closed back up again seems.

my vote would be straightforward panel damage.

Thanks man, I appreciate your help. With any luck that’s all it is. I looked at a video on youtube of a guy replacing the panel in a vaio e series. His model is similar in layout and design and it looks as if you can do it fairly simply with a couple phillips heads and a spudger.

I think I’ll just give it a try since the laptop only cost me $175 new anyway.

I hope that things will go as smoothly as expected. The only part of the screen that makes me a trifle leery (quite possibly just damage to the in-panel driver circuitry, which is crazy delicate, quite possibly just the signal connector getting jarred a bit by the fall, and you’ll be disconnecting and reconnecting that anyway), is the upper left corner of the screen, most visible in the lower right picture.

Is that rainbow-stripey area (sophisticated technical term there, people, copybooks open) mostly static or does it ‘shimmer’?

As noted, I don’t have much experience with Sony; but my first tech job was laptop repair/refurb and I’ve seen quite a few since, and the classic bad controller cable (in absence of trauma to the screen) is progressive, degenerative, ‘shimmery’ visual noise, often more pronounced in blocks of certain colors, or in transition areas between colors, as the cable gradually dies from repeated flexing (worse in the classic convertible tablets with the swivel screens, since the cabling had to take worse abuse).

A sudden sharp shock is quite likely to knock a cable assembly loose(it’ll probably be screwed down on the motherboard end of things, and fine there; but just friction-fit on the panel side); but signal cables usually die of prolonged repetitive motion rather than sharp jolts.

Oh, also, while I’m rambling: be sure to open up the dead LCD panel. Pretty much all LCDs have a multi-layer diffuser arrangement to distribute the backlight evenly, and I’ve never seen such seemingly-impossible trippy optical effects as provided by some of the patterned plastic layers in LCD diffusers. At first you think that ‘eh, just a Fresnel lens, how cute.’ Then you realize that it’s some sort of freaky Fresnel-like lens that apparently mocks all sane rules of light transmission. Definitely worth what you pay.

If your taste runs in this direction, shapes cut from those films can be used (alone or with other elements) in any sort of mobile or other hanging-decorative-piece that catches some sunlight. The effects are quite remarkable.

One of my coworkers is a former SONY Electronics repair technician who did work on their VAIO PC line. He was not a fan, and said they were more complex to repair than other brands like Dell, Hewlett-Packard and Lenovo because SONY would use many more screws and smaller parts, causing teardown and assembly to take 2-3× as long as the other brands. And then, often, replacement parts would either not be available, or backordered for months from Japan.

My feeling is that unless you are comfortable working on laptop computers, you should let someone else do it.

The *checks notes* rainbow-stripey area is mostly static but it does change and sometimes disappears entirely. Ive opened/closed the machine while using it a couple times since it happened and the rainbow-stripey area doesn’t seem to be degenerative, though it does occasionally flicker and change. I’m thinking the cable might be slightly loose as well, but as you said I’ll be reattaching it to the replacement panel anyway.

Thank you for your additional ramble… I’ll most definitely pull it apart and check it out. Science is so freaking badass.

@goretsky Thanks for your help too. I think I’m going to just march ahead foolishly despite having never changed anything but RAM on a laptop. I’ve built a few desktops and am aware that laptops are a meaner, less cooperative beast but as I said… I paid $175 for the thing and even if I screw up the installation I could take the panel I buy to my computer guy and he’d probably install it for $80 anyway, since the $160 he quoted me was for parts and installation.

I would strongly suggest reviewing the appropriate hardware maintenance manual for your SONY VAIO E-Series laptop, as well as checking YouTube. If the model was a popular one, it is likely there is one (or perhaps even more) videos documenting how to replace the screen.

This topic was automatically closed after 1039 days. New replies are no longer allowed.