The first time Merle Rasmussen played Dungeons & Dragons, he thought it was a Halloween game.
“It was October 1975, and I was an 18-year-old freshman at Iowa State University. My roommate got this game filled with skeletons and undead monsters. I had no idea.” The role-playing bug had bitten him, but fantasy wasn’t his genre. So that same year, he started writing a game set in a modern world, the spy game that would become Top Secret.

I remember ads for this game, although I never owned it. Looks cool, but needs more aliens.

I loved Mercenaries Spies & Private Eyes. Lots of Tommy Guns, amphibious airplanes, and jungle hide outs. It was pretty much “Tales of the Golden Monkey” crossed with a John Woo flick

I had th original but my gaming friends didn’t get into it so i didn’t have a chance to really get into it myself. I’ll look into the new one.

I still have my original Top secret, Boot hill, Gamma World, and Car wars games.
Loved all those early role playing games.
Good luck to Merle introducing the next generation of role players to the warm and fuzzy world of espionage. 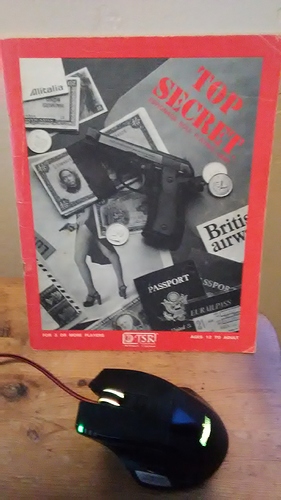 To see if your character succeeds at a task, three dice of varying size are rolled, and they must always add up to 13 or better for success. It’s that target number of 13 that has led to the new game engine’s name, the “Lucky 13 system.”

All my games from that era are long gone. Gamma World didn’t even survive my teen years as I sold that off to buy a bunch of Steve Jackson Games stuff. The only thing I’ve repurchased as an adult is some OGRE/GEV sets. I’d like to have Shockwave as well but not really willing to pay collector prices for it when there is the option of getting the original edition from The Space Gamer either free off archive.org or as a paid PDF from SJG.

Top Secret was my very first RPG, back in 1980. My GM was a merciless bastard, but I still managed to get my second agent up to Level 6 before we parted ways. Then came AD&D and Traveller and Star Frontiers, FASA’s Star Trek RPG and then Twighlight: 2000. Fond memories. And then came GURPS.

I admit I am curious to the new version.

Top Secret. How I remember you well.

After every Bond film in the 80s, we’d pull you back out and play a few games.

I think one of my favorite parts of the rule book was the “Euphemisms” section.

Big fan of the original. Typo called a “thermite bomb,” a “termite bomb.” Spent more time rolling up characters then playing the game.

I have the original box, too. My Gamma World perished in a fire, and oh, how I miss it.

I still have a few oldies - Gamma World, Boot Hill, Bushido… Don’t seem to have Top Secret anymore, or Star Frontiers, alas. But I played 'em all, back in the day.

FYI, Gamma World’s spiritual successor Mutant Crawl Classics (by Goodman Games) is just coming out now (the PDFs are here, printed matter is either still being printed or on a boat). So good timing if you want to get back into that

Thanks for the tip but P&P RPGs are mostly a nostalgia thing for me. I I get back into tabletop gaming at all it will be for war-games but I have to find people interested here in Tokyo. As far as I can tell most here are D&D/Pathfinder focused.

EDIT: but I’d still try and find people for the new Top Secret.

Fair enough. I have zero Tokyo suggestions. Around here (San Jose CA) a lot of game stores actually have dedicated game space where people play (which seems crazy given the cost of real estate, but I’ve seen it in 3 of the 4 game stores I’ve been to).

& yeah, much like D&D was the big focus in the 1980s, it still is, although mishandling of the 4th edition did lead to a lot of people continuing with a D&D 3.5 fork (Pathfinder). Although if you want a D&D that really does play like 1980s D&D I would point you back at Goodman Games again, and Dungeon Crawl Classics.

Anyway, good luck getting a group for whatever game you favor. It can be a real challenge these days.

P.S. if you don’t mind playing over video chat, that is a big thing these days. Much easier to get groups running that way.

if you don’t mind playing over video chat, that is a big thing these days. Much easier to get groups running that way.

If I’m willing to compromise sleep due to time zones that might work for RPGs but not so good for war-games. For that however there is vasalengine.

Roll20 is a great way to tabletop around the world.