I’d be interested to see what the winning bid was.

I bought one of these along w/a library of tabletop gaming stuff from the mid-late 70s, when I was a used bookseller in the 90s. This was pre-internet, so I didn’t know how rare it was - I just thought it was neat, having played D&D as a kid in the 80s. Ended up selling it for $10 to a wide-eyed ~13 year old girl who came into the shop looking for fantasy paperbacks, and she was effusively stoked to get it. No regrets - one of my better memories from that job.

Those were the very ones that got me into D&D in the first place.

Believe it or don’t, this is the first set of D & D rules I ever used:

It has hobbits and ents in it, later redacted to halflings and treants because of Tolkien Estate rent-seeking.

You see these pop up on eBay periodically, too.

I’ve seen pics, but never seen one before IRL. IIRC this was the attempt to take war gaming and miniature war gaming and parse it down to individual fighters, vs just whole units.

You need that for the original edition to even be playable. It assumed you already had a copy of Chainmail.

I actually saw one of the original D&D sets - and supplements! in Half-Price Books a few weeks ago. Probably should have bought it but we really don’t need more rare D&D stuff in our house.

That seems right, from my vague memories of the early 1970s. Up 'til then the miniature figurines represented units who were all equipped the same; like, this swordsman is a maniple of hastati, and this horseman is a century of equites, or whatever.

You need that for the original edition to even be playable. It assumed you already had a copy of Chainmail.

I had forgotten that! I do have copies of Greyhawk and the other Alderson books somewhere, though.

By the time Runequest was eventually published, I was already involved in armed combat sport fighting. The difference in the realism of the combat rules was so profound I never looked back at D & D once I’d discovered Runequest. It’s actually far harder for me to imagine D & D character classes and combat mechanics than it is for me to imagine dragons, balrogs and magic spells… but despite its flaws D & D was a groundbreaking game and its place is assured in history.

I actually used to give a talk on the original edition of D&D at the museum. I stopped doing it because for the most part, if you’re interested in D&D you probably already know most of this stuff, and if you’re not then it’s just not interesting. Plus I felt pretty awkward explaining “satanic panic” to guests.

Plus I felt pretty awkward explaining “satanic panic” to guests.

Oh I remember that. I was playing D & D with college students, and my (very Christian) family also sort of knew I was climbing buildings and exploring ventilation systems and sewers at the time*, and of course I was hammering out vambraces and helmets** in the yard, so when James Egbert disappeared into the steam tunnels they pretty much freaked out. I had a lot of 'splainin to do.

* mostly in order to gain access to University of Delaware computers, and to my High School’s maze of jefferies tubes, which in turn provided access to the old fallout shelter and several other secret lairs.

** made from 30 lb freon® cans found on University rooftops near HVAC units.

My mom ended up selling all my first edition hardback AD&D books, including the ones I got signed at GenCon…I think she got $10 for EVERYTHING. I still wish I had my copy of Deities and Demigods.

The “wood grain” boxes were what was around when I first got into RPGaming in 1976/77. They were RARE though; it was more common for DMs to show up with three-ring binders with xeroxed copies of the rules.

I bought one of the first White Box sets in 1977. It still had hobbits.

I managed to snag copies of Tunnels & Trolls 2nd edition and its supplement earlier in the year; that had a more lasting impact on my gaming career.

I admit to fantasizing about finding a wood grain box set at a garage sale. “Oh, I guess I could sell that for five dollars.”

Sounds interesting! I’d like to hear! I used to give tours at a space museum.[quote=“clifyt, post:11, topic:90691, full:true”]
My mom ended up selling all my first edition hardback AD&D books, including the ones I got signed at GenCon…I think she got $10 for EVERYTHING. I still wish I had my copy of Deities and Demigods.
[/quote]

I still have all mine. Good news is, most of that stuff is easy to find on ebay, and usually not that much money. There are some exceptions. Deities and Demigods was awesome. Mine was a used copy with a messed up back cover, and the old, not so good art. But it was like a Cliff Notes of mythology.

** made from 30 lb freon® cans found on University rooftops near HVAC units.

As if these aren’t normal things. Hmmm.

I still wish I had my copy of Deities and Demigods.

I found a copy of that in a game store about 6 years ago. The original printing, with all the copyrighted mythos in it that had to be removed later. It was a used, well-loved copy and the owner had trouble believing I really wanted it in that condition. It’s probably my husband’s favorite Christmas present that I’ve ever given him. Or at least equal to the working copy of “Dark Tower.”[quote=“Mister44, post:13, topic:90691”]
Sounds interesting! I’d like to hear! I used to give tours at a space museum.
[/quote]
Currently my topic in that gallery is on the movie Highlander. So far it’s a better talk. I also tell people about Daleks and the costumes of Star Trek. And now I’ve probably totally outed where I work.

Mine was a used copy with a messed up back cover, and the old, not so good art. But it was like a Cliff Notes of mythology.

I have both editions – and then the Legends and Lore (I think that was supposed to be for AD&D v2 though). I collected just about everything – and second editions almost always had different content and not just a reprint as one would expect. Hell, I actually had photocopies of different addenda from Dragon Magazine and others for ‘modern’ religions that would have been too explosive to put in the book.

As a kid, it was as you said – a Cliff Notes to all these religious / mythology and helped understand this to start researching how others actually believed.

I have Chainmail and the D&D set, not in woodgrain iirc
memories

mostly I got into D&D cuz there were older girls and various, ahh other attractions suitable to the age (mid 70s-early 80s) ahem

gasps
i’d love to have such a thing!

and wait… you don’t have to color in the sides of the dice anymore??

To see what I’ve got, start with the below and click right ten photos. (The last couple aren’t of a TSR game, but they show a recommended play aid. I gave one of those to Cory last time he was in town…) 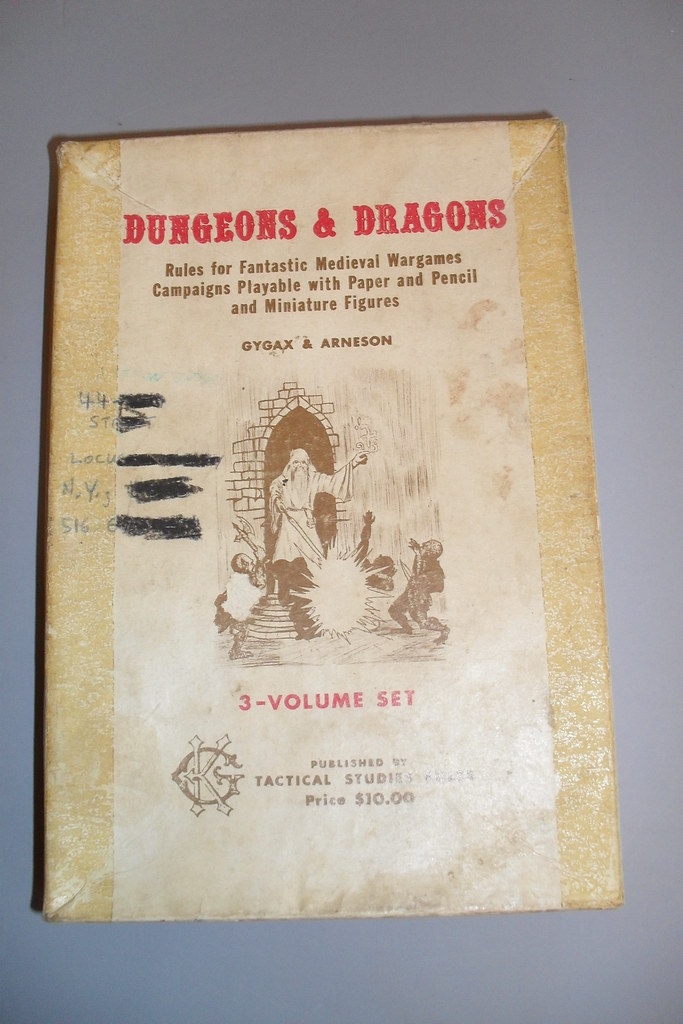 (Even before Hobbits and Ents were removed, there were subtle differences between the wood-grain and white box books. I remember pouring over the sample dungeon map in one of the old books, fascinated at the example rooms. When I got my white box books, I turned and found several of the rooms were missing! You could tell by looking at the map where they were blacked out.)

Man, and I was going to pitch these… j/k