Originally published at: Tourist attacked in Hawaii by mama seal who was looking for her pup (video) | Boing Boing

after being attacked by a seal

More accurately, harrassing a seal and finding out. Characterizing this as a “seal attack” is disingenuous.

There’s a reason Hawaii has a law that one must stay at least 150 feet away from a monk seal with a pup. It is a class C felony to harrass a monk seal.

The animals are starting to get pissed off.

Can someone who thinks this is a person “finding out” point out to me the evidence that this woman was “harassing” the seals? Everyone who was there said, and the ABC video recorded by her husband from their hotel room, obtained by ABC, plainly shows, the mother seal, with her pup following her, left the shore and swam out several yards to attack the woman. 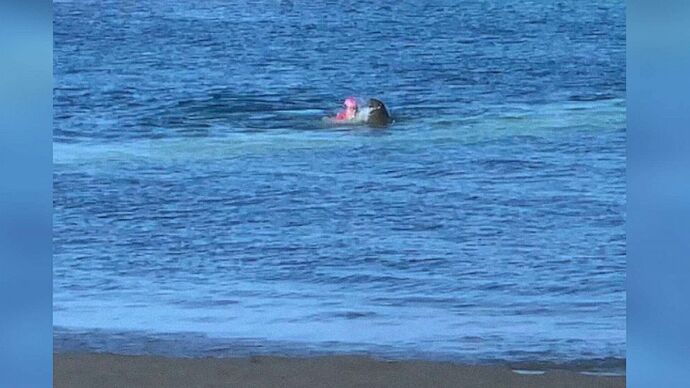 The authorities who reviewed the case did not charge her. Is it because she’s a teacher that you think she’s at fault? Is your next unfounded charge going to be that she teaches CRT? To seals? Oh, maybe you think she was going to “groom” the seal pup? That makes as much sense as saying she was “harassing” the seals. The seal mother plainly initiated the attack.

Check the local Hawaiian news coverage. The beach was closed. All the other swimmers got out of the water but one swimmer did not. The seal was making warning vocalizations well before defending her pup.

Just found one of the articles that asserts, “Marine life officials said the woman was previously warned of the dangers of being in the area.” 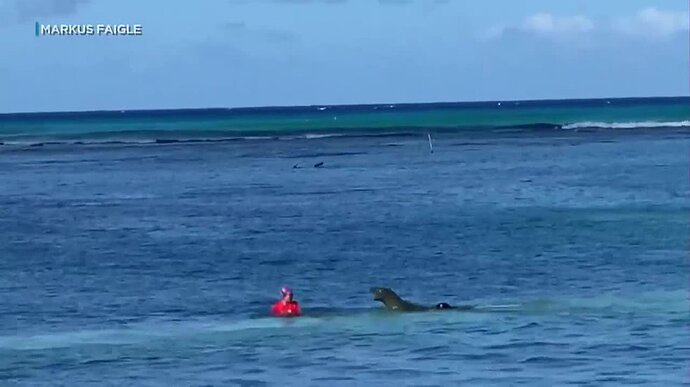 A protective monk seal attacked a swimmer in Waikiki on Sunday morning.

Once again, someone please show me where anybody who was there or was in authority says she was harassing the seals. The Honolulu Star-Advertiser has footage showing the seal mom leaving the shore and swimming several yards out to attack the woman, not the woman bothering the seals: 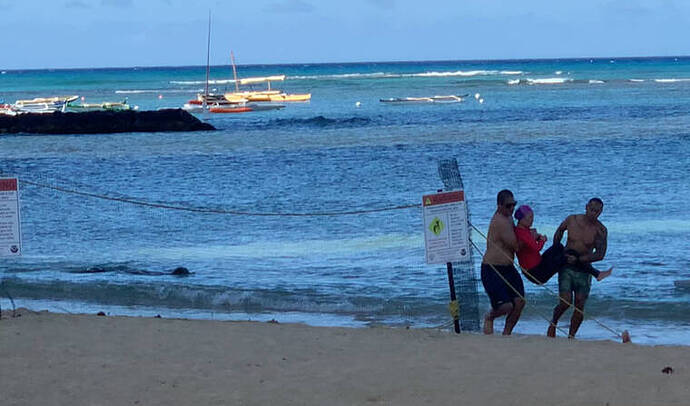 VIDEO: Woman injured swimming near nursing Hawaiian monk seal and her pup in...

A woman was injured today while swimming too close to a nursing Hawaiian monk seal and her pup in a fenced-off area at Kaimana Beach in Waikiki.

I do think that she probably was not as aware of her situation as she should have been. Her husband said that she intended to abide by all the warning signs. In the previous video, you can see the mother seal go to the swimmer, not the other way around. And again, look at the video the husband took from their room at the hotel (At the .48 mark of the ABC video.)

The seal and pup are at the shore, then the mother seal takes off, followed by the pup, and attacks the woman. The news reporter gets it wrong. The pup swam to the other side of the woman; she didn’t “get between” them.

I’m pretty sure I would have stayed by the hotel pool, but a swimmer not knowing that she was near a seal is different from “harassing” a seal. I’m stickin’ to my opinion until you come up with the video of her swimming in to shore and deliberately bothering the seal pup.

swimming several yards out to attack the woman

Emphasis mine. The distance that people are required to keep away from seals with pups is 150 feet or ~50 meters. Note that this is not required of the seals. It is required of the people. It is an active responsibility, not a passive one. If you are in an area where there are monk seals, you are supposed to actively avoid them, not wander about randomly and, hey, oops, there’s a seal.

I’m pretty sure I would have stayed by the hotel pool, but a swimmer not knowing that she was near a seal is different from “harassing” a seal. I’m stickin’ to my opinion until you come up with the video of her swimming in to shore and deliberately bothering the seal pup.

That’s not how harassment of wildlife works. Moving into the territory of a territorial animal is harassment. It doesn’t require blowing raspberries at them or calling them names.

This is a constant problem with tourists in Hawaii, and it’s why warning signs are posted at every beach.

So, I can’t just post the address of the video? I have to actually quote from the story? Fine.

“A woman is recovering from her injuries after being attacked by an endangered Hawaiian monk seal with a young pup at a Honolulu beach over the weekend, officials said.

The dangerous encounter occurred on Sunday morning at around 8:30 a.m. local time on Kaimana Beach in southern Honolulu’s Waikiki neighborhood, where the mother seal known as Rocky recently gave birth. Rocky was visibly agitated and distressed that morning after her baby went out of sight and apparently swam into the dilapidated former swimming pool of the nearby Waikiki Natatorium War Memorial, according to the Hawaii Department of Land and Natural Resources.

Lifeguards were not in their tower yet as 10 swimmers went into the water at Kaimana Beach, with no seals visible on the beach or in the ocean. One of the swimmers – an unnamed 60-year-old elementary school teacher from California – was near the natatorium, about 150 feet off shore, while her husband was watching and videotaping from their 12th-floor condominium.”

Notice that: 1. about 10 people went into the water, after they checked and did not see any seals. So, there were no seals. She checked. 2. there were lifeguards, so the beach was about to open. It wasn’t closed. There were warnings about seals, but she checked. No seals. 3. that she swam into the area, 150 ft. from shore, after the seal and the pup had returned to the shore. So she was 150 ft. from the seals, which, remember, she didn’t know had returned to the shore. And, once again, 4. reports that the woman came between a mother seal and her pup is not what shows on the video. The pup swam up on the other side of the woman.

I agree with you that it’s very likely the local authorities don’t want to press charges because she was mauled. The local business folk would probably like this to go away as quickly as possible. Killer Seals? Bad for business. But, keep us posted on the NOAA thing, huh?

I feel for the woman due to her injuries and I’m glad she wasn’t hurt worse. As pointed out in the articles, she was not malicious, just insufficiently cautious. That’s a characteristic of tourists pretty much everywhere, but the consequences of naive incaution vary with the inherent dangers of the environment.

As anyone can plainly see in the video, the beach was indeed closed. There are pylons and plastic fences surrounding the beach. That does not signal, “hey, jump in and have a swim!”

To quote the Executive Director of the Hawaiian Monk Seal Preservation Ohana, “And for someone to think they should go ahead and have a swim, just because they don’t see the mom and pup on the beach is very irresponsible. Rocky was protecting her pup; she did not attack this woman, this woman provoked it by being in her space.”

Well, now we have dueling opinions from organizations. In the initial investigation, officials from the Department of Land and Natural Resources, the state organization looking into this incident, said the woman was in the “wrong place at the wrong time” while swimming off Kaimana Beach about 8:30 a.m. Sunday despite signs and barriers that have been up in the area for weeks. They seem to think, like me, that a person could make an innocent mistake. They did not impose any fines.

The article in Hawaii News Now on Tuesday reports that, “The couple said they’ve acknowledged and abided by the warning signs in their previous visits to the beach. They stand by the account this was a mishap in the water, and they do respect nature and animals.”

The school teacher could still however face a federal fine.

So some places I went to today have the both quote from the Department of Land and Natural Resources which is the state organization, 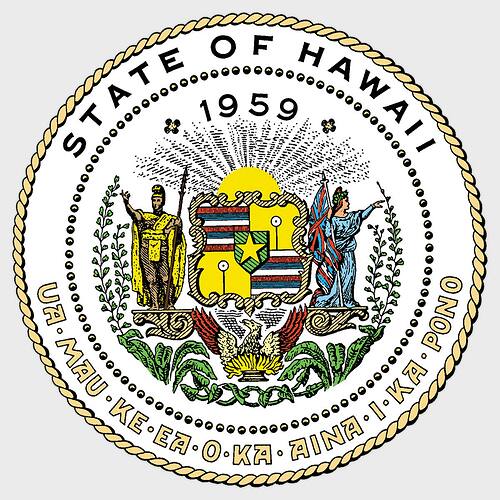 Department of Land and Natural Resources

and also the later quote from Dana Jones, the Executive Director of the Hawaiian Monk Seal Preservation Ohana, a volunteer organization which (1) provides education and outreach to Oahu’s communities about the species and (2) cares for, protects, and responds to the needs of Oahu’s Hawaiian Monk Seals. 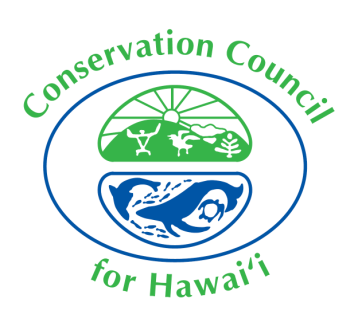 They seem to be less inclined to see this as a mistake anyone could make. As many news outlets report, “Dana Jones, the executive director of the Hawaiian Monk Seal Preservation Ohana, called the woman’s move ‘irresponsible’ and said she had 'provoked it by being in [the seal’s] space’.” 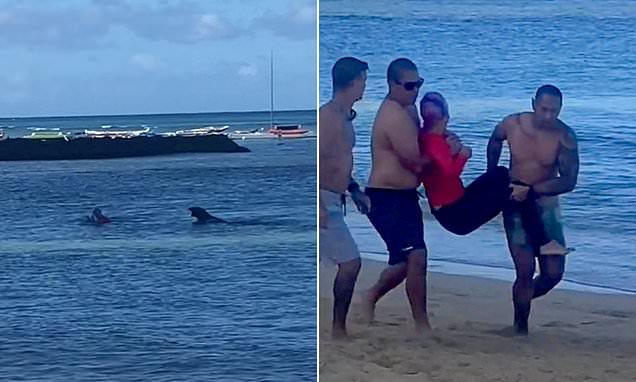 A elementary school teacher, 60, from California was attacked by a monk seal on Sunday around 8am at Kaimana Beach in Waikiki on the island of O'ahu.

We’ve got some other dueling quotes too. DukeTrout now says, “As pointed out in the articles, she was not malicious, just insufficiently cautious.” This shows a change of heart from his first comment, where he disputes that the seal attacked the woman, but, rather, “More accurately, harrassing a seal and finding out. Characterizing this as a “seal attack” is disingenuous.”

So was the woman harassing the seal mom and “finding out”, or was she trespassing without realizing she was “in the wrong place at the wrong time?” I would be really happy if DukeTrout is willing to forgive this woman her trespasses. The seal did what a seal does. But every once in a while, we human beings get the opportunity to respond with compassion, and do better.

Keep in mind no seal or pup was harmed. I’m thinking we could all just look and try to learn something here.

7 posts were split to a new topic: Christian exceptionalism on the bbs

The signs on the beach and cordons are a dead giveaway she had no business there.

A post was merged into an existing topic: Christian exceptionalism on the bbs

I really don’t understand what the argument here is. We can sympathize with both the seal and the woman while recognizing that the woman was at fault (whether intentionally or not).

The lesson here is that things like this happen when humans encroach on the natural habitats of wild animals, and hopefully this incident will motivate people to stay away from seals. Anything else is just noise.

Keep in mind no seal or pup was harmed.

But you don’t know that. It may be that no seal or seal pup was physically injured, but the interaction may have changed the behavior of one or both in such a way as to risk their long-term survival. That’s why experts on pinniped behavior want to minimize or eliminate such interactions with endangered Hawaiian monk seals. They do know that intense interactions with humans change the seal’s behavior, and that’s why there are severe penalties for initiating interactions with seals.