Trump has already changed everything

I’ve heard people who I think of as progressives say that if it comes down to Clinton vs Trump, they’re going with Trump.

And just like the voters of yore who had trouble deciding between Gore/Bush, or Romney/Obama, good riddance to them.

The Washington Post recently did an article on the topic of cross-over voters:

I am reluctant to give articles based on polls much credence at this point in the election cycle. This time around, even the best and most accurate pollsters are getting it wrong-- repeatedly. And the clever people who analyze and interpret the polls (Nate Silver, I’m looking at you) are getting the results consistently wrong. It’s an interesting phenomenon, and one I haven’t seen before. The times they are a-changin’.

There is a lot more to that article than just flavor-of-the-day polling. 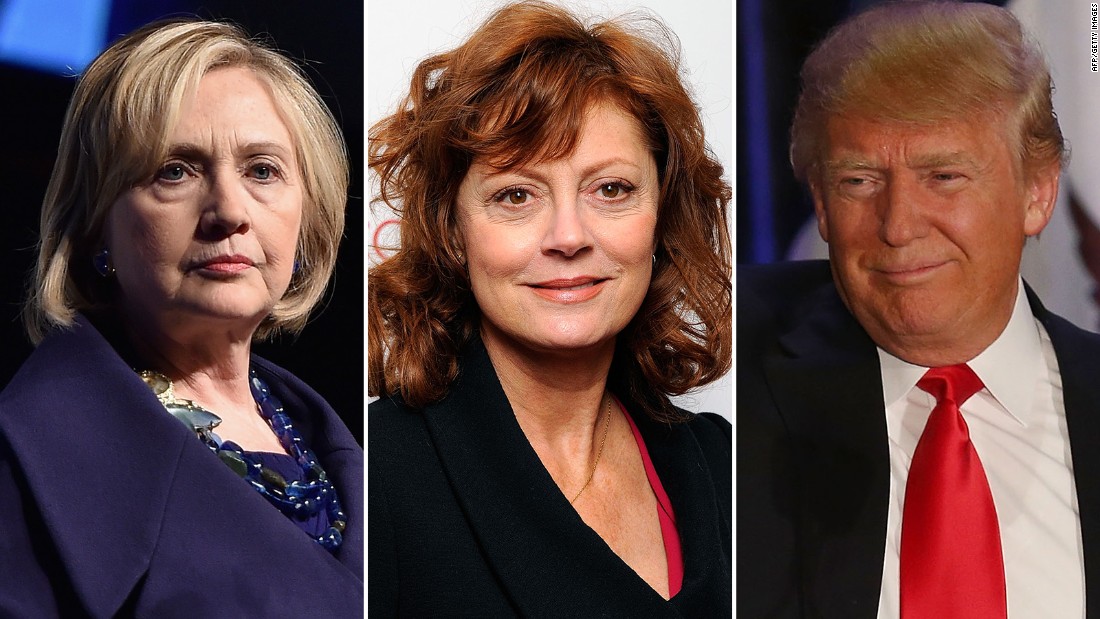 Susan Sarandon, a Bernie Sanders' surrogate, says Donald Trump would be more likely to usher in "the revolution" than Hillary Clinton.

Trump isn’t even that conservative… but what’s troubling is that many of his positions just don’t make sense in a political context. He says he’ll raise trade tariffs because he wants to look tough, but hasn’t weighed the results (the price of everything at walmart doubles) in order to form a justifiable opinion.

Here’s a more scientific chart (it’s funny that the early one didn’t include trump):

And here’s a more recent one with Trump:

Nothing in that interview says she was even considering voting for Trump. Just that she would have to think hard before voting for Clinton (a not uncommon opinion).

When I caucused with my local Democratic party last month, there was a majority of Bernie supporters in attendance. However, during the comments portion the general feeling was “Blue no matter Who”.

There was absolutely no expression of crossing party lines by Bernie supporters if Hillary wins the nomination.

she’s just as polarizing as Trump

Not even remotely. I just saw a survey taken that indicated that not only would either Democratic candidate handily win by a large margin over Trump, but that Trump currently has the lowest approval ratings of any candidate since they started measuring such things, by far. Something like three-quarters of women voters actively dislike him, 80% of younger voters, 85% of hispanic voters… these aren’t people he’s going to win over.

With Trump, the other candidates don’t seem half so bad…

Well, they seem smarter, anyways - even the dumb ones. He’s actually to the left of most of the Republican candidates on a number of positions, and to the right of them on almost nothing. This crop included a fair number of raving reactionaries, making even Trump seem moderate in comparison.

With Trump, the other candidates don’t seem half so bad…

There’s an expression that goes something like “When you’re standing in the End zone, the 50 yard line looks pretty far away.”

Just because the other guys appear more moderate compared to Trump doesn’t make it remotely true.

So the goal is to precipitate a crisis by electing a complete bozo to the presidency? Makes no sense. Consider that after two terms of Obama, you have an insurgent like Sanders who’s almost pulling it off. If Clinton turns out to be essentially the third term of Obama (and I haven’t seen much evidence to the contrary), then someone like Elizabeth Warren might be able to challenge the primary in 2020 and win. Bernie’s so close, but he’s not quite there yet… maybe 4 more years will be enough to push the Democrats over the edge. Thing is a Clinton presidency will be predictable.

A Sanders presidency probably will be predictable and frustrating, especially if the GOP holds the Senate, and even if they don’t, I wonder how many Democratic senators will attempt to thwart his revolution.

On the other hand, elect Trump and we’re really into unprecedented territory. Shit might work out, but it could go terribly wrong too.

Pretty much my feeling.

Sometimes it takes waking up in a dumpster with a broken jaw, covered in your own feces to say “you know, maybe I should look into this AA thing”.

I believe that President Trump may be that dumpster.

I believe that President Trump may be that dumpster.

He’s just the lid to the dumpster (Trumpster). There is way, way more room to fall.

I think it’s incredibly intellectually lazy to paint your enemies as social outcasts (i.e. racists) and dismiss everything they say as “dog whistles” rather than actually trying to understand them.

Here is a letter to the editor published by the local Gannet rag this morning:

Why I support Trump

I see several letters regarding the reasons people do not support Donald Trump, I want to tell you why I do support Mr.Trump.

Our government has become so corrupt with greed and cronyism that it will take someone outside the government to clean it up, or at least start. I don’t believe it can be done quickly. Donald Trump is a bully and he’s brash; the exact kind of temperament who can get things done. We voted for conservatives who caved to the liberals as soon as they got to Washington.

For those of you complaining that he isn’t conservative, please check out Trump’s website. I think you would be surprised to see just how his tax, health and immigration plans would work. I get that you may be judging everything on the debates, but if you watch the interviews that have been carried on most news stations, you might have a real insight into the heart of this man. Sure, he gave money to various causes that we, as conservatives would not support, but he gave just as much money to Republican causes. Sure, he’s changed his opinion on some very important subjects as he’s learned more about those subjects. Remember, he has been very busy in other endeavors, not politics.

It is my opinion that we need a business man to restructure the way this government does business. Have you ever wondered why the establishment is so frightened of this man becoming president?

Because he will cut the puppet strings to the lobbyists who are the real power-brokers running the country. Donald Trump doesn’t owe anyone anything; he can put Americans first and we will be the better for it. Have you noticed that as soon as Donald Trump states a policy, the other candidates pick it up and run with it as if it was their idea.

Between Cruz and Trump, I believe that Trump is the stronger of the two. We need someone not afraid to dole out a few black eyes.

I’m hoping people will wake up and do their homework.

Donald Trump is the real deal, and that’s why I support Donald Trump to be our next president.

NOTE THIS LETTER NOT WRITTEN BY ME so save the vitriol, please. I provide it for anyone who wants to understand the real reasons a person might want to vote Trump. I’m not interested in defending any of it.

I predict that if we end up with Clinton v. Trump, we will see either the lowest voter turnout in history, an unprecedented number of write-in / third party votes, or both.

So the goal is to precipitate a crisis by electing a complete bozo to the presidency? Makes no sense.

That depends on how imminent you believe the next catastrophe is. Between the environmental issues we’re facing, and the looming debt bubble, there’s a fairly reasonable argument that another 8 years of doing next to nothing will put us past the point where we can actually do anything.

If you believe that, then 18 months of disaster and a quick impeachment seems like the better alternative.

I predict that if we end up with Clinton v. Trump, we will see either the lowest voter turnout in history, an unprecedented number of write-in or third party votes, or both.

Yes. And it’s kinda funny how if it’s Sanders v. Trump, it might be the highest in history.

How has this meme managed to worm it’s way into the conservative imagination as a good idea? Attempting to run government as though it were a business is a terrible idea. Is there more to this? Is there a desire to clean up the corrupt contract letting in the DOD, or something? Because Michigan elected a governor with that frame of mind, and what did we get? The worst roads in the nation and thousands of lead poisoned kids.

Didn’t you know? Anything and everything “the government” does is bad bad BAD!! And when Republicans screw it up even further, it’s always the Democrats’ fault.

Jeebus, it’s almost like you haven’t been listening lately to how it all gets explained on the radio.

Elizabeth Warren might be able to challenge the primary in 2020

If Clinton wins, I can’t see room for Warren (or similar) until at least 2024. And if Clinton were to be a two-term president, you’d be asking for 5 straight Dem wins to get that.