If Donald Trump gets the GOP nomination, all bets are off—and Ohio’s Republican governor just might find common cause with the Democratic frontrunner.

Trump is proving 2 things for Republicans:

2.Such appeals to bigotry, while popular among Republican voters is a ultimately a scorched earth campaign. In the effort to appeal to the most cretinous of the conservative voters, Trump has effectively killed any chances of appeal to undecided voters and minority groups needed to give a margin of victory.

Why in God’s name would she pick Kasich? Right now he has a reputation as the sane Republican, but that’s completely relative. He stands against all things Democrats are for.

I think the Daily Beast sees elections as a kind of fun horse race, with no real-world consequences.

Oh fuck no!
Kaisch just signed a bill to defund planned parenthood in Ohio. He is as bad as the rest of them. He just has a better “sane face” than the others. 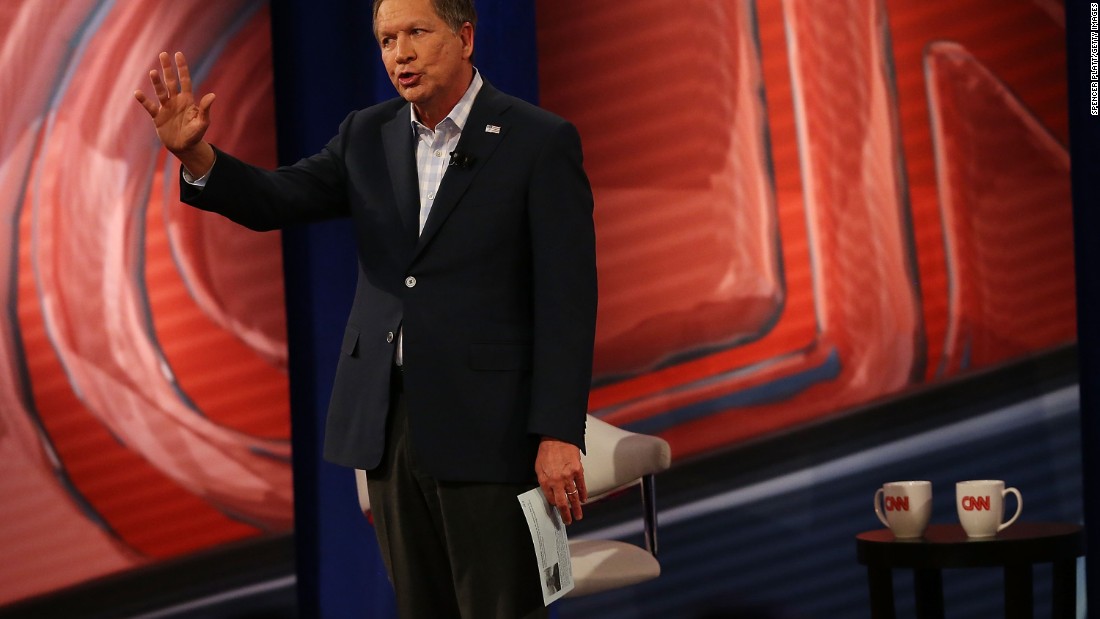 Ohio Gov. John Kasich signed a bill Sunday prohibiting the state from contracting for health services with any organization that performs or promotes abortions, blocking government funds to Planned Parenthood.

Plus why have a clear loser on a ticket. Kaisch can’t even appeal to his own party (low single digits), what good is he as a mixed ticket running-mate?

Democrats who don’t think that they, too, may have to “face facts” about Trump may be whistling past the graveyard.

I’ve usually been pretty lax come election time of the 4 that I have or could have voted in (didn’t vote in Bush/Gore because I disliked both, I was young and stupid. I’m still stupid, but older now.). That time has ended. I used to roll my eyes at people who basically framed every election as life or death. Now I know what it feel like.

…Nevada’s caucus that he won about as many votes as Marc Rubio, Ted Cruz and John Kazich combined.

What’s the word for misspelling a name with letters from one’s own name? Freudizzled?

But I’ll be darned if the media want to pretend they didn’t play a huge role in his easy path to the nomination.

Or being told that the behaviors characteristic to one’s particular group are wrong, rude, or socially unacceptable, having previously been (and still remain) gleefully ignorant of any concerns but those of the group itself.

But I’ll be darned if the media want to pretend they didn’t play a huge role in his easy path to the nomination.

I think the implication is that 24 hour news channels made this problem, not so much the left leaning outlets that have been basically writing “WTF?!?” pieces for the last year. I doubt many Trump supporters read the Guardian or Boing Boing.

I think the implication is that 24 hour news channels made this problem, not so much the left leaning outlets that have been basically writing “WTF?!?” pieces for the last year. I doubt many Trump supporters read the Guardian or Boing Boing

I’m beginning to realize - with Bernie’s stumbles and Trump’s victories - just how influential the mainstream news media is (even if it doesn’t want to admit it publicly). There’s a lot of Low Information Voters out there who are just going to vote for the person whose name they recognize. Trump and Hilary have a several decade head start.

What sucks is that a Trump v. Clinton match-up might be a lot tighter than it by all rights should be. Trump will motivate racist idiots to go vote, while Clinton will motivate well-meaning progressives to stay home. And when one side’s wingnuts show up and the other’s doesn’t…

Hilary’s going to have to make lefties idealistic about her to win. That’s a tough sell.

Though it may work in her favor that people are terrified of Trump. Like, I’d vote for a hat rack before I’d let Trump be my president. The hat rack could even be a little bit hawkish and in bed with corporations, I will put a VOTE FOR HATRACK sign up in my window.

But Sanders would be such a better candidate against him. There have rarely been two more different possible candidates for presidency.

A Hillary vs. Trump election would certainly be interesting. Hillary could go after Republican voters as the Republican choice in the election. “Look, I don’t like this any more than you do. But nevertheless, here we are…”

oh! oh! I know! Let’s get Joe Leiberman to run as the veep! That’ll bring em out in droves.
Not.

Kasich is only ‘sane’ in comparison. He’s a giant dick according to folks I talk with in OH (where I’m from) unless I talk to an R, in which case Kasich isn’t insane enough for them.

That the once great Republican party is now being led by a carnival barker and rich a-hole with even fewer morals and smarts than Mitt Romney? Wow. Well, when you empower the crazies and Birchers this is the insanity you get.

The Daily Beast is trolling.

So what is Kasich’s most succesfful recent policy triumph? Defunding Planned Parenthood of Ohio. The money meant for HIV testing.

The Daily Beast is just trolling for clickbait, as it so often does nowadays.

Kasich is only ‘sane’ in comparison. He’s a giant dick according to folks I talk with in OH

He’s widely loathed in OH for being a total phony. He has a decades-old reputation for pretending to be whatever might work best; right now, he’s trying his “nice dad” act. This is a guy who can say with a straight face that he wants to be a champion for education while cutting school budgets, teacher salaries, and proclaiming that he’d eliminate all teachers’ lounges if he became president.

It took me a few re-reads to realize that you said “hat rack” and not “hack rat”. Really though, either of those is still better than Trump.

On CNN last night, some GOP bigwig was talking about how it will soon be time for the party to coalesce around a single candidate with the implication that the candidate is Rubio. I would have loved for the CNN talking head to point out that it seems to be happening and ask at what point he would get in line and start backing Trump?