The “hand wringing” can stop now over what Bernie will do, he’s on record saying he will back Hillary Clinton for POTUS. We all knew Bernie would be a good sport and he hasn’t disappointed. 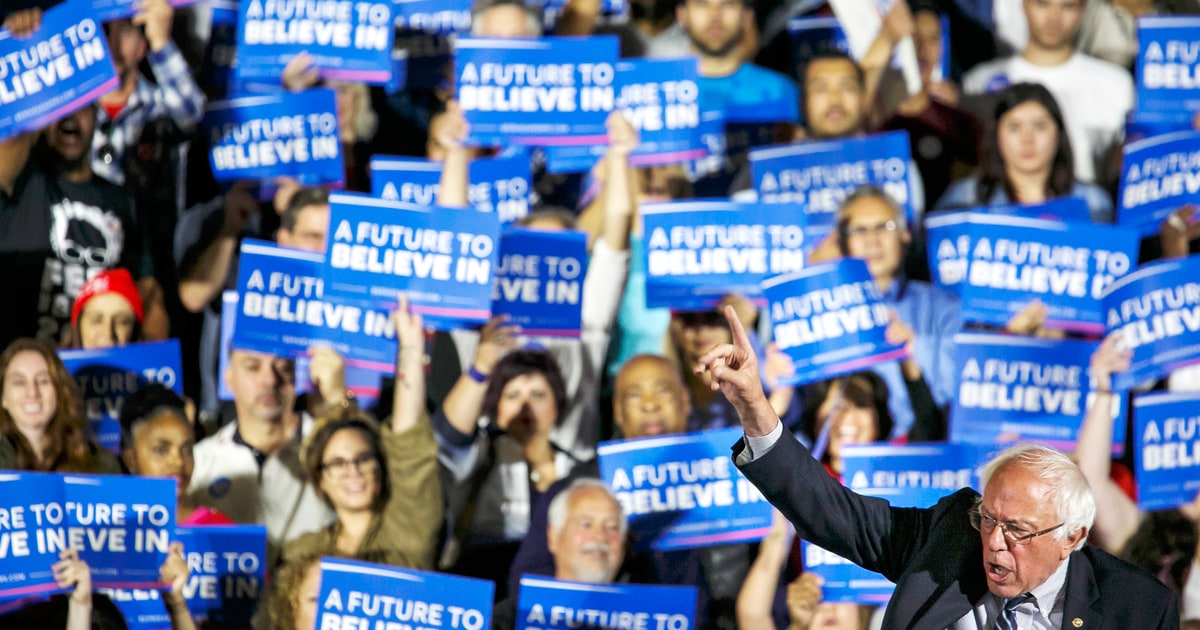 Dems Will Learn All the Wrong Lessons From Brush With Bernie

Instead of a reality check for the Democratic Party, it'll be smugness redoubled.

Yes - read that. Its absolutely right, and thats why a Clinton victory is even more dangerous than all the perils of a Trump victory. And its why I refuse to vote for Clinton and the party and mindset that puts her forward.

absolutely ridiculous. if trump becomes president the supreme court will be completely destroyed for 20-30 years. citizens united will look like a liberal decision after some of the stuff that’s coming.

Clinton victory is even more dangerous than all the perils of a Trump victory.

Wow, just wow. That’s some very interesting pretzel logic you have there.

Its a very interesting pretzel world, isn’t it.

Thanks for proving my point. Stay awesome.

read that. Its absolutely right, and thats why a Clinton victory is even more dangerous than all the perils of a Trump victory.

While I think Taibbi’s probably right, which is depressing, I don’t think the conclusion that we’re better off with Trump follows. We got Bush, and there was no significant Dem. establishment correction turning to listen to the more liberal constituency, just eight years of horribleness followed by another centrist Dem. with the Overton window pushed even more to the right. Trump is already moving casual open racism into the domain of acceptable. Four+ years of that derangement would leave us more broken with even more work needed to be able to adopt more progressive policies.

I don’t think we are better off with Trump. I won’t vote for or support Trump. But I think Hillary losing to Trump is a natural outcome of denying her the support that she thinks she is entitled to, but is not. And for me its a bitter pill to be swallowed on the way to tearing down a party that would refuse to embrace a populist movement, because it was not the party insider’s populist movement.

Instead of scolding me for obvious perils of a Trump victory, instead offer ways to tear down the Democratic party without Clinton loosing.

So your plan is to burn the whole thing down and hope we get something better in another generation or two?

I think it would take only one election cycle to break the Democratic Party - 4 years.

Or we let Clinton and all, banks and corporate sponsors, have their way with us some more and nothing changes.

alas, this is probably going to prove so true.

That’s a rather optimistic and naive expectation for what would happen if Clinton loses to Trump. Gore and Kerry both lost to Bush, but neither of those losses created the revolution you seem to think was needed.

If Trump wins that doesn’t send the message that Democrats need to be more progressive to win elections, it sends the message that celebrity, grandstanding and scapegoating are more important factors than substance, qualifications or basic human decency.

That’s some fantasy “science experiment” festering in the rear of your proverbial refrigerator. You are entitled to an “opinion”, but your salesmanship needs tuning, a lot.

But I think Hillary losing to Trump is a natural outcome of denying her the support that she thinks she is entitled to, but is not. And for me its a bitter pill to be swallowed on the way to tearing down a party that would refuse to embrace a populist movement, because it was not the party insider’s populist movement.

Sanders lost primarily because not enough people voted for him. There were shenanigans as well, but in the end there was more support for Clinton from voters and not enough for Sanders. The group you and I are in of left-leaning sorts isn’t the Democrats, but a relatively small bloc under a big tent. This blows, but there really isn’t a left/liberal voting bloc large enough to support a party in our broken two party system. Clinton earned the support she got by doing whatever it was that drew more voters. If that doesn’t include you (and didn’t include me), those are the breaks. I still prefer Clinton over Trump, since her policies are far better, and in the end I care more about the least bad policy being implemented than any of the rest.

instead offer ways to tear down the Democratic party without Clinton loosing.

Feel free to run for local office work your way into the party machinery, write letters and get in the faces of your representatives and let them know exactly what you want in specific, granular detail, join the Greens and try effect some change there so they’re more than a rounding error, or create a PAC/policy org. that works towards promoting the change you want to see. Those are some ways to effect change. Tearing down the party in our dumb, broken two party system doesn’t give you the party you want, it just tears down a party.

Kerry and Gore were not the same situation - no revolution was brewing which they quelled with their candidacy.

Everybody will take a different message. The fact is if Hillary loses it will likely be because the Party ignored and then fought a groundswell of support that formed around one of its candidates, and as a result ended up with a fraction of the support they needed, instead of all of it. The party elders should have told Clinton to step aside months ago. They still could, but we know they won’t. Its their chance to take.

I ddnt come here to sell anybody - you asked.