And even reasonably famous, fairly rich people have their pets treated the same way. http://m.huffpost.com/us/entry/1903661 . I have often thought about moving across the pond, but the multi month mandatory quarantines and this kind of behavior immediately nips that.

BTW, I have no interest in this hotel chain, but I recently made a 1500 mile move with my menagerie. LA Quinta hotels are easily the most pet friendly, common, clean, and inexpensive I have found.

I am full of sympathy for the dog, but really, what’s worse? Half an hour in the rain in your crate (which is effectively roofed), or substantially longer than that in the dark, cold, screaming room that inexplicably jumps around every so often with no warning?

To be fair, this is the kind of business that would have no qualms about making you stand in the rain, too. It’s not like it goes out of its way to pile on dogs.

This is the kind of business that in 2006 dumped the pensions earned by its roughly 63k current and 58k retired employees. In the same year its CEO Glenn Tilton took in $1.1 million in salary and bonuses. They’ll treat your pets like they treat their (non-executive) employees.

The disappointing factor here is that when United was alerted, they accepted no responsiblity, putting the blame on PetSafe. I think a better response would have been ‘PetSafe owns that, but we’re in touch with them to get action.’

Remember: to airlines, your pet is nothing more than luggage

That’s no way to treat luggage either.

Remember: to airlines, you’re nothing more than cargo. 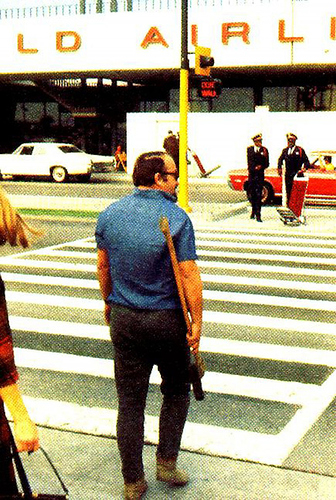 On a flight from Washington D.C. to Los Angeles in 1968, American artist
Ed Kienholz (1927–1994) reluctantly checked-in an ornate, well packed
Tiffany lamp and lampshade he and his wife, Lyn, had received as a gift.
He had planned on carrying the items on board, but the airline
insisted that it be checked-in. Kienholz was so concerned about the
handling of the items that he had the airline insure the package before
takeoff. Upon arrival to LAX, Kienholz discovered the lampshade
shattered and irreparably damaged. He explained: “I went in [to baggage
claim] and told them that I had this lampshade, how I had with great
reluctance shipped it through, and that I wanted to open it there and be
sure it was okay. Of course, I opened it, and it was busted.”

After having the lampshade appraised, Kienholz submitted a formal
reimbursement claim with TWA, only to have the airline refuse payment
and accuse him of fraudulently packing a broken item in the hopes of
recovering a cash settlement. More disturbed at being called a liar than
by the loss of the lamp, Kienholz threatened an airline customer
service representative that if the matter was not resolved by the time
he returned to LA from an exhibition out of town, he would enact equal
damage to TWA as the airline had caused him. While waiting for the
airline’s response, Kienholz consulted with an attorney (who encouraged
the artist not to take justice into his own hands), then returned to LAX
with a typewritten letter, a photographer, and an ax.
Kienholz’s letter bluntly stated: “Good morning, my name is Ed
Kienholz…you broke my lampshade and I’m really unhappy…so I’m going to
cause TWA an equal amount of damage. I’m going to destroy a desk for
TWA.” [emphasis added]

This is exactly what Kienholz proceeded to do; he destroyed the desk
and, somehow, made it back to his car before being apprehended by the
Los Angeles Police Department. Though cited and fined for disturbing the
peace, Kienholz was eventually reimbursed, and vindicated, for the
lampshade through a small claims court victory against the airline, and
no further charges were filed or pursued. Throughout the incident,
Kienholz not only documented his actions through photographs and
writing, he also garnered and exploited a tremendous amount of local and
national media attention. He summarized the incident as follows: “It
takes a lot of ‘Up, up and away’ ads to overcome the humorous, negative
publicity TWA got out of that. They would have been a lot better off to
not call me a liar.”

UPDATE: looks like teh Boing covered this back in 2008, and included another photo of (just before) the actual axing (which I have otherwise been unable to find online; my duck-duck-go-fu is sorely lacking): 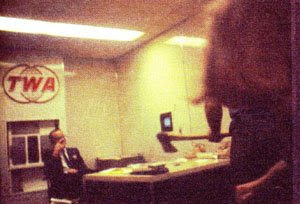 Airlines charge money just for handling an animal. For the price they charge, a valet should hand carry the animal to a quiet part of the terminal then hand feed the animal caviar and champagne while it waits for its master.

I have had: lost dog, dog arrives early endlessly traveling around the baggage carousel, kennel left on its side with dog inside, dog left more than 30 minutes on a hot tarmac, dog forced to wait more than two hours inside kennel before a lazy petty bureaucrat would hand her over. My old worn out coat has been treated better. As far as I’m concerned, the fucking airlines and their baggage handlers can burn in hell.

I was once in an airport terminal waiting for my plane when a woman looking out the window yelled “Hey, they dropped my cat!”
(It was long enough ago that I don’t remember which airline or airport; my guess would be Denver Stapleton, and Continental or Eastern.)

My wife bought a cello from a dealer who regularly flies over from Christchurch. One instrument he bought over for us to try was fine but he had to replace the hard case because it had been damaged in transit by the airline, and clearly had boot prints on it. Seriously, who walks on a cello?

We know that United breaks guitars.

I flew with my cat exactly once, Colorado to Indiana and back again at the winter holidays. I paid to take her in the cabin with me, but it turned out that the second leg of the flight out was on a little 16-seater without enough space under the seats for her carrier, which meant she had to be jammed into the (freezing, loud) cargo hold plane-side. That was bad enough from my perspective, but apparently not from the airline’s.

On the return trip, I showed up at the Indianapolis airport with baggage and cat, only to be told they wouldn’t accept my cat on the flight because it was “too cold.” See, once again she was going to have to go in the cargo hold for the first leg, and it was below freezing at the intermediate airport, and they “couldn’t guarantee how long the carrier would sit on the runway” before someone bothered to bring her into the airport for me.

Cut to me, gobsmacked, asking the airline folks just what the hell I was supposed to do in that situation - leave my cat behind? Go away, miss my flight, and try to come back some other day (week, month) when the weather was better and hope they’d re-book me? They acted like the cat was a pair of (not even illicit at that time) nail clippers that I could just toss in a nearby trash can and never miss.

Also, who books an animal for passage on their airline in January and doesn’t bother to mention “hey, we could just randomly refuse to carry your pet because of weather, hope that’s OK with you”?

I only got the problem resolved by declaring that I would personally stand on the runway next to the puddle jumper for as long as it took to have her unloaded from cargo and then carry her into the airport myself. Which they probably only let me do because it was pre-9/11.

On another note, I keep reading the headline and then going to a Brak place.

It’s simple: if you love your pets, do not give them to the airlines under any circumstances.

It’s simple: if you love your pets, do not give them to the airlines under any circumstances.

Could be, but they could also do a better job. Just a DECENT job with their charges would be nice.
If I had to travel with a pet on a plane, it would be with me in the cabin or not at all…

I once had a cat and a motorcycle, and both needed to get from east to west coast. The vet gave me some sort of cat xanax for The Fattitude in her very small crate, after which I remained absolutely willfully ignorant as I handed the 'tude off to some freight handler at the entrance of a huge hangar just off the flightline. Airports easily fuck up humans so I can only imagine what it’s like for pets, like some mechanical apocalypse worthy of flashbacks and pet PTSD.

I’m pretty sure even tropical fish, when they’re on their way to becoming someone’s pet, get treated better than pets. 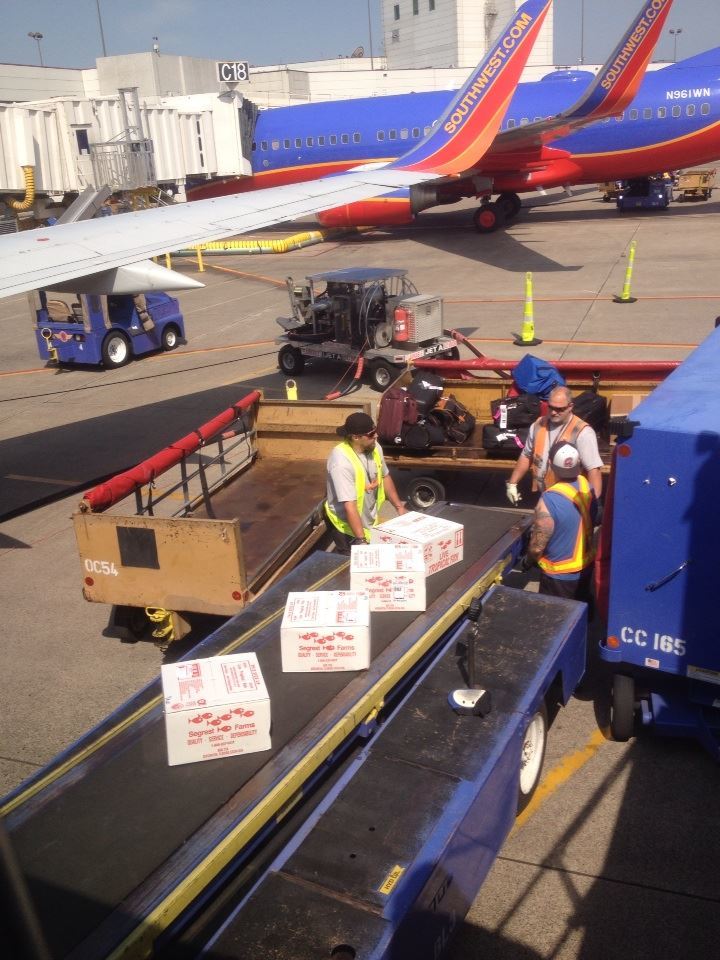