Up next: A Wearable Holodeck . . . with actual feels!

It feels a little weird thinking this, because I’m afraid it means a lot of my favorite science fiction is going to look a little silly in a few years, but I’m pretty sure everything I thought about the future is wrong.

That’s because it doesn’t require any new technology. We don’t have to invent anything, we just have to keep refining things we already have in an ways that we already are.

It’s the best name I can think for what happens when we of vision enhancement (Oculus Rift+eSight+Google Glasses+[welder’s Helmet]+augmented reality) with haptics (haptic gloves, exoskeleton technology, tiny servos, etc.)

When all the pieces are put into a box and shuffled, you have a near-future society where . . .

And all of this happens because of economics.

If you’ve got this technology, and it could easily be as ubiquitous as cell phones and nearly as inexpensive, why would you buy a big screen television when you can turn your living room into a theater? Why would an IT department keep replacing keyboards and monitors and such when nobody needs them? Why would you buy a board game when you and your friends can make all the pieces appear in front of you? (with pieces that move and squeal when you squish em!). Why would you waste all your space on things that aren’t real comforts or treasures? Why waste the time and resources creating what you can just download?

Sure, there’ll still be a need for physical things. We’d want more comfortable places to sit and sleep, tastier food, better medicines, and so on . . . but we can be a LOT more focused. And, of course, we’d be putting more into sensors, cameras, processing power, and the like. . . because that makes everything more awesome.

Meanwhile, I know I’m JUST scratching the surface of this thing. My imagination just isn’t that good . . . and now that it’s in my head almost everything I used to think was cool looks kind of lame.

I have absolutely no idea where this ends, but I think we’re about to break science fiction. . . because we can do everything in this amazing video (other than scent and talking to people in comas) with no new advances. Everything else is just gravy.

So, let’s hit some details because there are a couple of really exciting things that aren’t immediately obvious unless they’re placed in context . . . but when they are it’s positively droolworthy.

I’m going to skip over the two big kids on the block here (Google Glasses and Oculus Rift) because they’re really well known and I think this crowd already knows them pretty well, I’ll hit on two less talked about creations. eSight and the most amazing welder’s helmet EVER.

We’ll start with eSight because it’s nice and simple, but it’s nice as an example because it gives us a slightly different context. These guys make glasses for the visually impaired that aren’t glasses. Instead, they’re just little LCD displays that display a pre-focused image right in front of a person’s eyes. They’re not fancy translucent things or bulky headwear. . . they’re nice and simple.

Now, ignore the hugely big bulkiness. This is a helmet for welding, it’s mostly big so people’s faces don’t get all melted. . . Instead let’s look at what they’ve done, because what they’ve done is positively amazing and I think you guys will see some of the rest of the potential now that the seed is planted.

When you’re welding the light is so bright that there’s no camera in the world that can gather a good image. Everything gets drowned out and you lose all the detail. They needed a way to augment that . . . to somehow get information from multiple cameras in realtime and to mesh them together in a single image.

Let that percolate a bit. We’re humans and think in terms of our two eyes. That’s where our vision comes from, but we don’t need an image that just comes from two cameras any more, and they don’t need to be right where our eyes are anymore.

Instead, every camera and sensor can be meshed together in different ways to provide us with images that are far beyond what we can do with our teensey little eyeballs. We see down into the infrared, up into the ultraviolet. . . Heck, we can see whatever we can sense, from magnetic fields to things around corners to . . . I seriously have no idea where this stops. There’s a scary amount of potential.

And we can supplement that in other ways, giving us information in ways that help us in ways that nothing else ever has. I don’t think I even have to get fancy, I just have to show you what these guys have already done!

I think that plants the right seeds for our eyes, just think distributed. The devices that sense, that process, and that deliver the images to our eyes can be all over the place and we’d just need to combine that into an image that’s useful from our local perspective.

So let’s talk about touch.

We humans are tactile creatures. Go try to touch the same point in space twice in a row. You can’t. We SUCK at that sort of thing. We can barely manage with our fancy super-slick cell phones because that’s not what we’re designed for. Now try to touch a point on a surface. We’re AMAZING at that. We can guide ourselves to the tiniest point just based on some slightly different tactile sensation. It’s what we’re designed for.

Not trying to interact with holograms. That’s a pain in the butt and completely unnecessary.

Haptics aren’t in the press as much . . . There aren’t any awesome videos of old ladies having the times of their lives in haptic suits or demolishing the competition with the Falcon . . . So for this we’re going to have to use a little more imagination.

We already have the ability to simulate touch with the power of electricity and we’re pretty good at it already, so let’s start with a glove . . . one where (at least) the fingertips use that alone or in combination with lots of tiny pins to give the sensations of pressure and various textures.

Now, add tiny little servos at each joint . . .sometimes to push against your finger but more often just to increase the resistance . . . soon you can feel yourself touching something that’s not there.

I’ve had the pleasure of playing with a few prototypes a few years back. The illusion is VERY convincing . . . just so you don’t move your wrist. . . that totally ruins it.

But why stop there?

You still have the feeling of texture, but now you have something else. You can essentially feel anything that you can grasp between your hands. A ball, a gun, a puppy, a 3-D miniature, a book. You can squeeze and have whatever you have respond normally (don’t squeeze the puppy too much). You can toss the ball back and forth, shoot the gun, pet the puppy, move the miniature on the table, and fold the corner of the book you were reading and put it away.

Connect down the spine to the waist, down the legs to your feet.

Now your sensation of mass is limited by the strength of your servos.

Did I mention that you can recapture power since you’re using resistance? This thing would be pretty much self powering. . . I actually forgot to mention that because it seemed like an afterthought among all the other coolness.

Sure, we’d probably be starting with something a bit bulky at first with the really fun stuff, but that’s not all bad, is it?

Now. . . I love fun as much as the next geek, but let’s get practical and use this to save lives and completely rewrite entire industries.

Think back to the augmented reality welders’ helmet and the little seed I planted earlier about that surgeon. That’s where this gets really awesome (double-awesome!). Sure, there’s a lot of focus on using exoskeletons to enhance strength . . . But the real magic happens when we use it to enhance our precision. The same code that draws that precise line for the welder also can help the augments hold the surgeon’s scalpel in place in ways he never could.

I could go on for hours . . . Days even . . . But honestly I’m afraid of priming the pump too much. I can’t fully grasp the potential because there’s so much of it. Who here predicted cell phones would turn into tiny portable computers that can hold a good bit of Wikipedia, tell us how to get almost anywhere and how to avoid traffic on the way, and are more common in Africa than lighted streets?

With a tiny shift in our efforts we could ALL have this in a few years. Not fifty or twenty, but maybe four.

So here’s my question . . . What are we waiting for? How do we make this happen and get it into the right hands?

Was this driven by this article, or is this a coincidence? 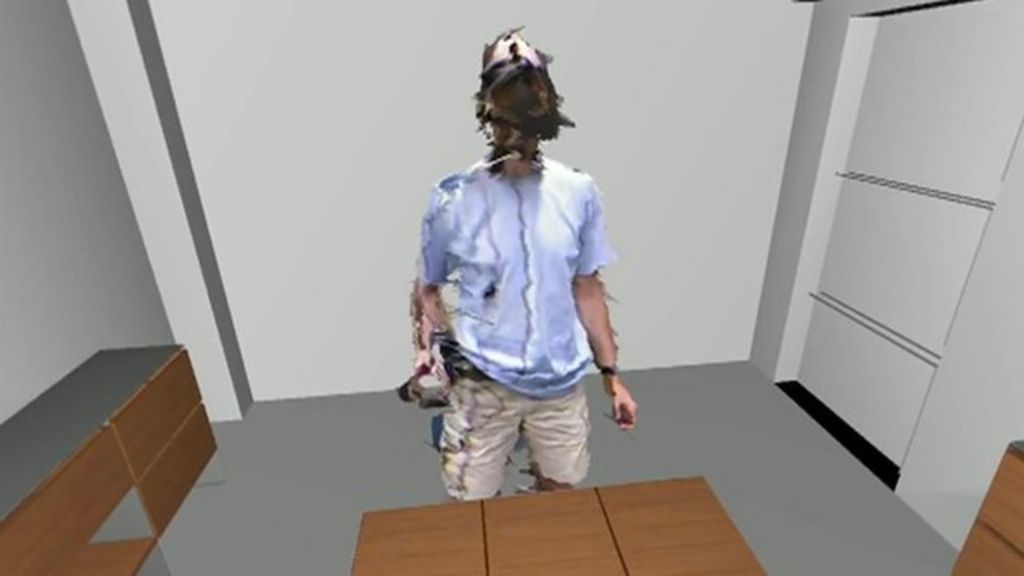 University of California, Davis researcher Oliver Kreylos has imported himself into virtual reality with an Oculus Rift headset and three Xbox Kinect cameras.

It’s actually a coincidence, and I honestly wouldn’t have called that anything ‘holodeck’ like since there’s no touch or anything.

It’s still a cute idea! But definitely only a tiny subset of what I’m talking about.

Yeah, I was a bit underwhelmed by that. I'm a little nauseous and a bit sweaty. This was my first time using the Oculus Rift. It's the sort of thing you've got to ease into, really -- sitting statio...

You just need to go to a big empty space and augment it! That’s the magic of this approach, you can interact with reality rather than trying to simulate it in ways that will always fall way short, y’know?

That being said, there’d definitely be a big benefit to having various extensors attached to the exoskeleton in the long term, and one of those treadmill things would be a fun short-term middle ground for people who live in really crowded spaces or don’t want to bother leaving home.

Professor Kaku actually talked about it a bit more in-depth in one of his discussions . .and he was SOOOO close to the real wearable holodeck!

This topic was automatically closed after 1006 days. New replies are no longer allowed.