Urban Transport Without the Hot Air: confusing the issue with relevant facts!

Obviously, I didn’t read the book. However, the post does make me think of various policies seen in Europe in the last couple of decades, and their various blind points.

If he works at UWE, he probably managed to write the whole book while stuck in a single Bristol rush hour.

Much as I loathe paying road tolls for driving in the city center where I live, I think it could be a workable way to reduce driving. It does sort of piss me off that rich people can afford it much more easily, though. If anything, I’d like to punish them ten times extra for their giant SUVs that they ride everywhere.

As tolls are increasingly proposed, the idea that driving in the city becomes the privilege of the wealthy bothers me, too. Tolls are a regressive tax, often punishing those least able to avoid or afford them. The tolls could be proportional to the price of the vehicle. The model and year of car is held in registration databases, so linking to the toll-collecting computer systems would seem plausible. The driver of a new Rolls Royce would pay more that the driver of a second-hand Hyundai.

does the author propose a social and economical revolution in the cities?

It would hardly be the first time that happened - as recently as the 80s the central parts of many Western cities were much poorer and more working class and those with money fled to the suburbs. That was reversed, city centres were gentrified and poorer folks were often pushed out to under-serviced suburbs. Things could easily shift again (in fact, the only guarantee is that things will change…)

That would be a reasonable way of doing it, indeed! Esp since I have a pretty cheap second hand Peugeot…

Seriously though, it often strikes me that various measures like this pose no problem at all to the rich, and may be a severe hindrance to those less well off. Same goes for high fuel taxes. Really bad for less well off people in the countryside, but rich people in the city can just keep on driving…

I happen to consult for the guy whose pet project this is. It should be opensource and is on track for road-worthiness certification hopefully soon.

Some photos from the Mk.2 assembly here:
https://hackaday.io/project/5066-luka-ev/log/27783-more-than-eye-candy

Lots of problems to tackle, tons of trials and tribulations, but did anybody see a project of any significant size that sails smoothly?

Hardly - a major undertaking like that, all progress is awesome.

I loathe paying road tolls for driving in the city center where I live, I think it could be a workable way to reduce driving.

I think that only works if there is an alternative mode of transportation. One of the few toll roads we had here in the ATL was still the most crowded road, because until pretty recently, we didn’t have any other transit up that corridore. They got one now, but it doesn’t go far past the perimeter.

We just added a new toll for some fast lane access, the peach pass. I think as @winkybber suggests, it really does privilege those who can afford the extra cash. And as the cost of living intown rises (which it’s doing at a very fast rate) the ability of those with less means to live inside the city is decreasing, the people who need the fast lanes are less able to afford it…

It does sort of piss me off that rich people can afford it much more easily, though. If anything, I’d like to punish them ten times extra for their giant SUVs that they ride everywhere.

Don’t we all. Of course, now the new status symbol are overpriced electric cars! A Tesla dealership opened up not to long ago here, near a part of town that has a fair amount of immigrants. but right across the street a new upscale apartment block is going up. I’d suspect in about 10 years, the Indian shops and the old mall down the street are going to be gone, replaced with Ponce City market clones!

Can we put an electric motor/batteries, whatever stuff you need, in an old VW bug? Cause I’d be all over that! Engine in the back, natch.

Can we put an electric motor/batteries, whatever stuff you need, in an old VW bug? Cause I’d be all over that! Engine in the back, natch.

Pretty much any car can be converted to electric. Replace the motor, keep the rest of the power train. There are quite some books how to DIY that out there, and I wouldn’t be surprised if an enterprising mechanic could be found to do that as a contract job.

(The LukaEV thing I am involved in is a little different - the motors are in the wheel hubs, so there is no power train where energy would be uselessly lost or that could be breaking down; you can run the thing on even just a single motor, the two-motor prototype got a wiring failure (the techies forgot to reconnect the motor after charging-through-controller test - when in a pinch you could charge the car by attaching a big-ass halogen lamp in series as a ballast and feeding it directly from the mains socket, for the cost of over half the energy being wasted) and it still ran, albeit with very noticeable loss of power. There are some tradeoffs with this, though; real-life tests will show how significant they are. The Boss should soon be driving the prototype on his routine errands.)

I might have to do that one day… My cousin is a mechanic, but he lives across the country now.

Maybe he’ll move back one day, but I think he loves it out where he is.

I do have dreams of owing a VW bug one day and this kind of project could be perfect for justifying the purchase. For a while I’d drive past this one that is light pink that was for sale. It’s still in the same place, but it’s no longer for sale.

There are quite some conversion jobs documented online for his reference. And/or I can find some book or two.

Light pink? Cute! (What about metallic green or blue, with black painting so it’d look like an actual bug from afar? Or red, with seven black spots, like a ladybug?)

If I ever do it, I certainly will. He’s the car guy in the family for sure. He’s kept my aunt and uncle’s van running far past it’s end of life, I think.

I haven’t ever looked, but of course, they must be out there. I know there were some plans for converting a diesel VW to a biodiesel not too long ago, so this must exist, too. If you know any books, feel free to share the amazon links with me.

Actually, I’d probably paint the thing. I’m really not a huge fan of pink. Purple, now, that I can work with. I’d also love just some random stickers or spray paint, all punk style. Or just some weird, folk-arty type deal.

Honestly, something like this will have to wait until my dissertation is done, though.

If I ever do it, I certainly will. He’s the car guy in the family for sure. He’s kept my aunt and uncle’s van running far past it’s end of life, I think.

…and now imagine what such guys will be capable of once full-strength metal 3d printing tech gets widely accessible.

…I should do my own part and at least try to 3d-print gaskets, both from conventional elastomers for low-temp duty and from bakeable materials for high temperatures (which will require quite some putzing with the goop compositions)…

If you know any books, feel free to share the amazon links with me. 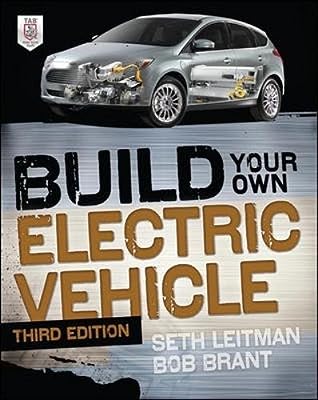 BUILD, CONVERT, OR BUY A STATE-OF-THE-ART ELECTRIC VEHICLE Thoroughly revised and expanded, Build Your Own Electric Vehicle, Third Edition, is your go-to guide for converting an internal combustion en ...

HOW TO DESIGN AND BUILD AN ELECTRIC CAR OR VEHICLE

At last a resource book is available to help you turn that EV dream in to reality. Never before has ALL the information you need been available from one place. NOT A BORING BOOK FULL OF MATHS AND DIFF ...

…and there are more out there. “electric vehicle” seems to be the keywords of choice.

Once you get it done, pictures please!

Honestly, something like this will have to wait until my dissertation is done, though.

If the work disagrees with the opinions of the supervisor, would it be “dissentation”?
[ducks and covers]

It still going well then? When are they gonna fix its weird looking butt? I want one when they’ve done that.

It still going well then?

Trials and tribulations galore. Like any bigger project and many small ones.

When are they gonna fix its weird looking butt?

This is apparently the love-it-or-hate-it part. This model will have it as-is. But given the relative decoupling between the load-bearing parts and the outer shell, there’s nothing that’d inhibit getting your own shape customized.