I prefer paper ballots which can be tallied by machine. Like the circle fill in type.

I am not super keen on purely electronic ones. There should be a physical paper trail.

Purely electronic ones with wifi access is just begging for them to get p’ownt.

Then again, MastaH4X0r69 might win via a write in vote and we get socialized Mt Dew and Doritos.

It’s a horrible idea to have voting machines at all. I have yet to hear of one that is more secure than paper ballots counted by hand in front of observers.

There is no conceivable world where a digital voting machine is a good idea. Not now, not ever.

Voting machines do have one benefit: consistency. So use them for that in a way that limits the impact of any potential compromise of the system or makes that compromise obvious.

Speed: the ballot box can quickly tally the machine-readable votes.

Detection of interference: there’s a paper trail. If someone compromises the machine to change the ballot questions, you could print the one-line summary of each question on the ballot itself, so the voter knows what they voted on.

Price: you need a printer and a touch screen computer/tablet for each voting station plus one ballot box (if your polling place gets enough votes to make hand-counting infeasible.) The printer and computer/tablet probably cost a couple hundred bucks combined at Best Buy, and you could use them for other purposes outside voting season. The electronics in the ballot box would probably be the most expensive piece of this system, but you’d need it (or something like it) to tally the machine-readable votes. If you wanted to just count the human-readable votes in a location that doesn’t have a lot of voters, you don’t even need that.

I’d give you a thousand likes if possible. A thousand! Do yuo mind if I steal this?

What could possibly go fucking wrong?

Do voting machines have a “none of the above” or “spoil ballot” button?

Oh sorry, were you using that democracy?

“,after a series of hack attempts committed by foreign actors against US voting machines…” I only recall foreign actors trying to hack into computers holding voter registration databases. Did I miss something?

Or is the web surfing the voting machines??

In Mother Russia, machine vote you!

Built-in cellular/digital modems for when the wifi goes down so the results can be auto-faxed to the people at the table in the corner 20 ft away.

Microphones so that the can record the mutterings of the voters and send it through a cloud based voice recognition system and applied to machine learning algorithms. Why? Uh, so we can create Word clouds of the election by district. Plus AI is cool man!

Speakers so that it can interact with your phone in higher frequencies than human hearing. That way it can harvest cool voter info.

Built-in cellular/digital modems for when the wifi goes down

Running a botnet based in part on active police vehicles is definitely a cyberpunk trickster-figure move; but the moral of the story is that cell bridges for bolting stuff onto the internet are…not exactly of impeccable quality.

(I realize that your suggestion was sarcastic; but it seemed a decent place for an already-real-world trainwreck story; especially since those sorts of bridges are the likely implementation if network capability is either an option or a bolt-on to an earlier design with only hardwired interfaces. The appeal is obvious; you can pretty much just put something with a serial port on the internet, wherever cell service exists, with a turnkey box; but ‘secure by default’ isn’t industry standard among sellers of such; and the silent-just-works aspect makes getting even the patches that are released applied in time less likely.)

Mostly good suggestions, but the machine-readable barcode is not one of them. People without smartphones (or the mental capacity to use them to verify the barcodes) will still be disenfranchised and/or confused. Instead, the ballot-tallying machine should read the same printed text the human sees, using OCR.

It’s purely a UX problem. Always remember that voting exists for the humans — we don’t exist to do data entry on voting machines.

By the Gods Below, don’t ask that question; that’s practically an offer to hold their beer while they find a way to make it worse! 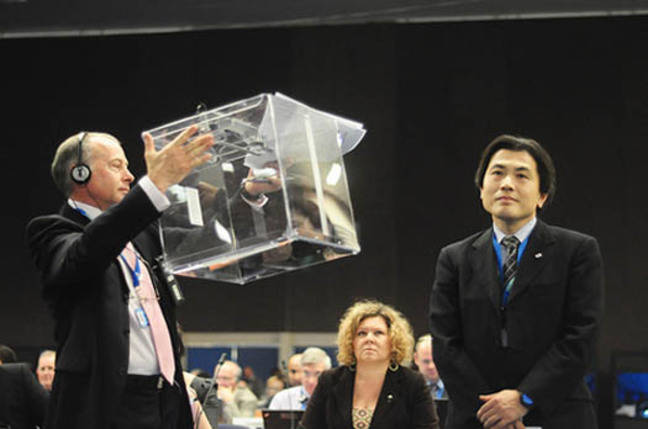 Computer voting not yet ready for prime time, say boffins