Venezuela: 'After being promised paradise we are living in a nightmare.'

So you think The Guardian is a reliable source for information. Good, read this article. It’s from yesterday: Venezuela's poor join protests as turmoil grips Chávez's revolution | Venezuela | The Guardian

You have every right to be suspicious of how media in the U.S. reports on issues such as civil unrest in other countries. But don’t be blind to abuse when it’s there for everyone to see. 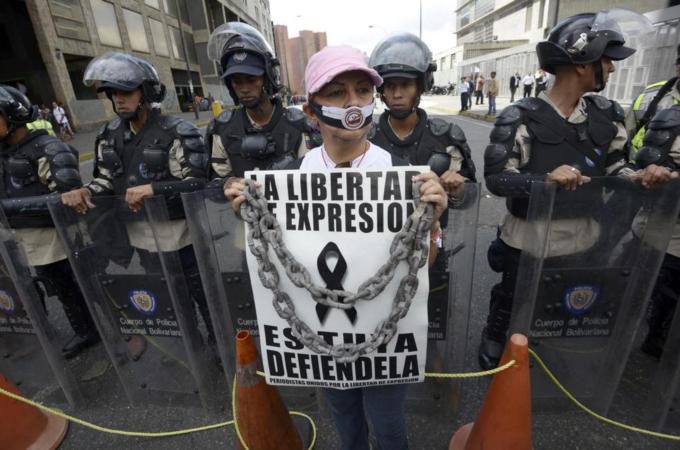 Towards another coup in Venezuela?

Protests are initiated by ultra-right factions of the opposition in the hope of an eventual systemic overhaul.

This seems a bit more nuanced and doesn’t read like it was written by an intern at the CATO institute:

Toward a nuanced, feminist discussion on Venezuela

If you’re paying attention to international news, you may have noticed that there’s something happening in Venezuela. And depending on what news sources you’re reading, you might be hearing extremely different things. What you’ll have trouble...

The Belen Fernandez article is nothing but propaganda. And bad propaganda.

First, it uses as a “source” the words and works of George Ciccariello-Maher, an ultra-left wing academic/propagandist that wrote a book on Chávez, and who routinely mocks the protesters as “nothing but a bunch of rich kids”. For someone who claims to know a lot about what is going on here (from the comfort of the distance), it seems to know nothing about what is happening. Is not only traditional media who are presenting a different view (a view one can certainly criticize) but HR activists with lots of experience in the field, and who are not friendly to traditional media coverage, like Rafael Uzcátegui (@fanzinero).

Second, it tries to ridicule and downplay the crisis of food and supplies shortages, and as someone who has endured the hours long cues just to get a bag of powdered milk or two packs of maize flour, I can say is about insulting as it can be. Emiliana Duarte is not the only one suffering the consequences of the shortages: Millions of Venezuelans are, chavistas and oppositionists.

I wonder if Belen Fernandez has ever done a cue in Bicentenario Supermarket (state owned). At all.

Curious detail: Mr. Ciccariello-Maher does recognize the shortages as a problem in another interview for Democracy Now, but here he says nothing. Curious.

As for the rest, Keane Bhatt (another propagandist) is just a a waste of time. Blah blah blah, Venezuela is a paradise, blah blah blah health and housing has been expanded. Yeah right, I would like to seen Mr. Bhatt trying to use the services of a public hospital down here (and I wonder why all public sector employees in Venezuela prefer to use the facilities of private clinics. I do wonder).

P.S.: I do remember you from the last time I was here. How was that word you use to refer to me, “neoliberal”? Is that the word? Yeah, I think it was that, combined with extremist.

I’m still saying that I know more about my own country than you and your cuckoo readings. After all, I’ve been here my entire life. And I studied Venezuelan History in the University, in case you are wondering if my references are “purely anecdotal”…

This seems a bit more nuanced and doesn’t read like it was written by an intern at the CATO institute:

Is it really necessary the name calling? Do you actually expect a positive exchange with the author, or with any Venezuelan supporting him for that matter, after you try to downplay the way he writes?

Or you just want a fight, just because?

Do you have any evidence, whatsoever, he and the U.S. Department are allies?

That’s the story of the entire world.

Sure. But while you are at it, feel free to stop ignoring the thrust of my post: this article is spun. I would rather read an author who can be more honest about their values and assumptions before applauding their words.

Stop, stop, stop. Right here, right now. I want to know exactly what the Koch brothers did to exacerbate this situation.

The article is a polemic, and I remembered you two from last time, posting endless youtube videos which seemed to have no context. The piece in feministing seems a lot more measured. I also find it comes across as more sincere, honest and less agenda driven than what you guys are selling.

Thanks for the mention of the feministing article. Particularly appealing from it (caveat: while I think there are some very interesting and creative projects within Chavismo, I am also quite critical of big chunks of it; no heroes here for me):

I’m particularly interested in leftist movements’ ability to hold leftist governments accountable when their actions are oppressive, in our ability to have a nuanced conversation about the ways the folks we prop up as heroes fail us.

And why do you assume the author is not being honest? Could you elaborate in that?

By the way your “proof” is an “article” from Venezuela Analysis, from Eva Golinger no less? Sure, very objective. If one likes fringe sites, and fringe authors…

The article is a polemic

And by polemic you understand “acting like a jerk and insulting the author”. Cute.

and I remembered you two from last time, posting endless youtube videos which seemed to have no context

I believe that was OSGuido, who had also a few exchanges with you. In our exchanges you pretended to know more about my own country (even though you never visited the place ever, so the one lacking a context were you) than me based on arrogance and a few cuckoo readings, like the ones you are using now.

I also find it comes across as more sincere, honest and less agenda driven than what you guys are selling.

I’m sorry, I’m confused: Are you calling this article “spam”? Trolling? Could you elaborate on that?

Why is this article dishonest?

BTW, there is no “we”. The article was written by OSGuido. Is his article, not mine.

The article is indeed, interesting. I did enjoy this part:

And the hesitancy of the American left to deal with these abuses, with the mixed legacy of Venezuela’s socialism, is stunning. While I understand the impulse to defend a project which the U.S.’s imperialist and anti-socialist agenda has routinely undermined, we’ve got to do better than this.

If there is something I’ve seen over and over again in forums and discussions about Venezuela, involving the foreign (and within that, the American left), is their inability to condemn the abuse and repression that is taking place in my country “just because they are left-wing”. It’s the same Pinochet/Castro scenario I always use as an example: They were both thugs, oppressors and murderers, but the Left is always, always, more inclined to give a free pass to Castro and only condemn Pinochet. Because, you know, “Castro is left”.

What about self-criticism? Is the Left capable of that? From what I read all these years, I believe it isn’t, for the most part. Articles like Verónica Bayetti Flores are, in itself, a rarity.

As for me, I’ve lost count of how many times have I’ve been called “fascist”, even though in my youth I was leftie, voted for Chávez constitution, and all my close friends were his supporters. I’ve lost track of how many times have I’ve been called “wealthy Venezuelan aristocrat crying for lost privileges” even though both of my parents were teachers, came out of Lídice barrio in the 1970’s, worked in the public sector for many years, and now live modestly. For me the charm of the left was diluted when I saw how fiercely they were attacked and ridiculed, just for oppose the abuses of Chávez and his acolytes. My father even lost part of his severance, the money he earned working all those years in public schools (more than thirty) just because he signed the referendum request against Chávez.

Oh, and the times I’ve been called “neoliberal” by Ereiamjh, even though I support universal health care and free education. Even though, I am an ex-employee of Fe y Alegría, the largest non profit in the country, that has worked for many years (more than 50) bringing free quality education to the poor. Even though I gave several courses/seminars to teach computer literacy to teachers that didn’t have any computer knowledge, helping them to instruct others.

I guess the Left incapacity for self-criticism is what George Orwell described in “Notes on nationalism” as the typical behavior of the nationalists:

The nationalist not only does not disapprove of atrocities committed by his own side, but he has a remarkable capacity for not even hearing about them

Do you have any evidence at all that I am a CIA Troll?

Put it up or shut up. Don’t poison the well. If you don’t understand the context, fine, go and educate yourself. But don’t come here while my people are dying to insult me and claim I am being paid to spread disinformation. I am writing with my full 4 names here, I have been writing about this and many other subjects for more than a decade. There is a lot of info about me on the Internet, so go on and try to prove I am being paid by the CIA if you can.

For the sake of everything you hold sacred and dear in life, have some decency.

Can you tell me please when the CATO institute has supported a Scandinavian model with a solid welfare state, universal healthcare and high taxes?

There were multiple reports of witnesses from the opposition evicted from poll centers, gunpoint. In a way not too different from what’s going on now.

Venezuelanalysis is not an impartial source. If you are going to give me a rough time, at least don’t be so obviously biased. Again, people are dying in the streets and your main concern is to save the face of the govt that kills them.

More honest about my values and assumptions? What else do you want?

It is very simple: Sweden, Norway, Finland are models worth emulating. Not Cuba, Gambia or Equatorial Guinea. No govt has the right to censor, neither to murder its citizens, neither to sit idle while some of its citizens murder others. Very simple.

There were multiple reports of witnesses from the opposition evicted from poll centers, gunpoint. In a way not too different from what’s going on now.

Other irregularities were documented by the Instituto de Altos Estudios Europeos.