Venezuela may be offering Snowden asylum, but "it can’t handle the truth"

Nelson Bocaranda.A Washington Post editorial out today details one of the more bizarre attacks by Venezuela against reporters and truth-exposers within its own borders: trumped-up charges against one of its best-known journalists, Nelson Bocaranda. He’s a newspaper columnist and radio presenter, followed by about 1.5 million on Twitter. In mid-2011, he broke the news that… READ THE REST

Even so, I think that Snowden has no choice but to accept asylum in Venezuela. They are ‘anti-Yanqui’ enough to keep him out of US hands.

Conversely, I’m sure the Obama administration would be happy to offer asylum to Bocaranda. Funny how that works.

You keep posting these descriptions of Venezuela as a dictatorship and an ill place for Snowden to go to, from the country that actually has been recently proved to have a massive citizen spy program, the US double standard never ceases to amaze me.

The funny thing is that you fail to realize why Bocaranda isn’t in need of asylum.

From outside the US, it is easy to see how utterly warped the US media portrayal of most Latin American countries has become - particularly Venezuela.

I have no idea if this article is true, partially true, or spun up based on a tiny kernel of truth. The Washington Post is the definition of an unreliable narrator when it comes to South America.

As for Snowden, he has to go somewhere. There weren’t any perfect countries offering him asylum, and none of the countries with (purportedly) better press freedom were willing to offer it to him. Where would you have him go?

While this story sounds plausible, I have to agree with bradbelltv. If BoingBoing wants to blog US mainstream media stories about Venezuela, Bolivia, Argentina or Nicaragua you should always preface the story with a caveat – something like:

“This report, from a mainstream US media source, should be taken with a huge grain of salt because the US MSM has a strong history of extremely biased reporting when it comes to these nations, all of which have chosen to opt out of the western neoliberal financial cartel, and hence are under constant attack, through propagandistic reporting, as well as financial assault and potential military assault usually in the form of CIA-supported coup attempts. There was a Venezuelan coup attempt in 2002 to oust Hugo Chavez that failed, and another in Honduras in 2009 that succeeded, both with significant assistance from the US government.”

I would add that the story the other day from the woman, can’t remember her name, that had her phone conversations tapped and played on television, would have been more insightful if we would’ve been informed of what activities her family has been involved in with regard to the coup attempts in Venezuela, or other attempts to disrupt the current government.

If you need further information that doesn’t get reported by the MSM, in addition to the two names bradbelltv suggested, I would suggest reporting anything on Venezuela by Greg Palast.

It is odd that we read all sorts of MSM reports on these nations, especially Venezeuala, on BoingBoing and nothing from alternate sources like Greg Palast, who has a much better record of propaganda-free investigative reporting (not to mention much more interesting pieces). Feel free to defend or discuss this editorial decision-making with us at your leisure. Cheers!

Admittedly, I know next to nothing about the politics of Latin-American countries and US involvement outside of MSM reports and a basic understanding of Iran-Contra - Do you have any recommendations for more information?

One other point of note. There has been much fuss made in the US MSM about Venezuela’s recent election. It is routinely reported, and the US government has asserted strongly that the elections were rigged. From reporting by Greg Palast is appears that there were attempts to rig the election, just not from the government. Maduro didn’t need to steal the election – as Chavez’s hand-picked successor, he had a very solid lead. In fact, it was the anti-Chavistas that attempted to steal the election using Choicepoint, the same company that stole Florida for Bush in 2000 by removing 56,000 minorities from the Florida voting rolls. They also stole the last Mexican election, and have actually apologized for doing so. They didn’t get away with it because Chavez’s response was to create a bullet-proof voting system. The whole story is fascinating: http://www.gregpalast.com/did-chavez-pick-steal-the-election-in-venezuela/.

Well, that’s a recommendation that’s hard to beat in terms of relevancy. Thanks. 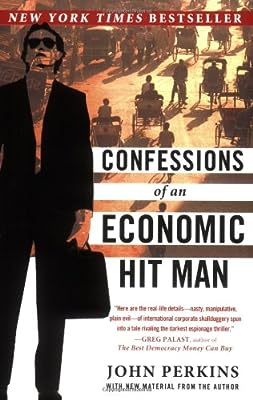 Confessions of an Economic Hit Man

I seriously doubt it.

They never stopped selling oil to the US.
They gave away (not sold, but gave away for free) Venezuelan property in the US to the US govt (mind you, not to the US Socialist/Green Party), just because Chávez wanted.
They just took a $USD 2bn loan of Chevron Texaco.

It’s all posturing. The moment that Snowden is not useful anymore for propaganda, or becomes too annoying, he will be deported. Look what Venezuelan rulers have done, and what they are doing. Don’t just listen to their words.

s I just don’t have time to fact check everything the US media publishes on their official enemies.

You are free to fact check Bocaranda’s claims, and the eerie silence of the authorities, so interested in transparency and human rights, about Chávez’ health, until the day he died.

Venezuela is not like Iraq, and if you are really willing to look for info there excellent sources online. Including the Venezuelan anarchists, giving very detailed accounts of why the Venezuelan govt is no friend of the people, despite their claims.

The US govt is terrible, and the violations of the privacy of its citizens are atrocious, however, that does not exempt the govt of Venezuela, the country where I was born, of responsibility concerning its lack of transparency, its corruption and general mediocrity. Don’t give the govt of Venezuela a free pass just because you don’t like the govt of your own country. We Venezuelans deserve better.

Bocaranda is not running from the govt? I admire his attitude, but that does not means the govt is benign. After all, I don’t see Michael Moore running away from Obama, I did not see him running away from Bush.

I don’t think any of us are saying that Venezuela doesn’t have its problems, hypocrisies, or even that this story is necessarily false. The point is it is extremely hard to get unbiased reporting on anything going on in those nations that have bucked the western financial cartel’s vampire-grip, including Venezuela, Nicaragua, Argentina and Bolivia (and until 2009, Honduras as well). And the best thing one can do is check various sources that aren’t mainstream US media to see if a story is actually true. The US MSM has a ridiculous and awful history of not just distorted, but outright false reporting on nations that aren’t firmly within our economic control.

Also, check out anything by Greg Palast, and Robert Parry’s ConsortiumNews is excellent also.

with regard to the coup attempts in Venezuela

A reader made a polite and unemotional post that addressed it and it was promptly scrubbed. Presumably because it could be considered “circumstantial ad hominem” or something along those lines. Considering it’s relevance to the narrative being put forward, and how ideological motives should be weighed when considering allegations I didn’t think it was much of an ad hominem as it was useful information to know. It’s good to know about your sources. Oh well…

This has been on my wish list for some time. I need to go ahead and get it…