alleges that Hendrix was murdered by his manager, Michael Jeffrey.

It’s not outside the realm of possibility. Jeffery sounds like a bad guy, right at home in an industry lousy with thieves and gangsters.

Pages for logged out editors learn more Frank Michael Jeffery (13 March 1933 – 5 March 1973) was an English music business manager of the 1960s who is best known for his management of The Animals and Jimi Hendrix, whom he co-managed for a time with former Animals bassist Chas Chandler. A former associate of noted English pop impresario Don Arden, Jeffery was and remains a controversial figure. He died in a mid-air collision over Nantes, France in 1973, whilst onboard an Iberia Airlin...

If there was a way to reliably kill someone by getting them to choke on their own vomit then choking on vomit would be a lot more common cause of death. 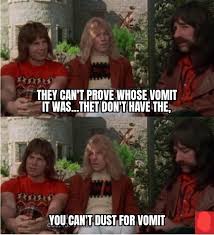 If there was a way to reliably kill someone by getting them to choke on their own vomit then choking on vomit would be a lot more common cause of death.

Maybe the vomit was incidental. Maybe the overdose would have done it even had there been no vomiting.

“The music business is a cruel and shallow money trench, a long plastic hallway where thieves and pimps run free, and good men die like dogs. There’s also a negative side.”
― Hunter S. Thompson

From what I understand the Vesparax in his system was a high dose, but Jimi had been taking large doses of it for a while and had developed a tolerance. No. It does look more and more like he was murdered, but I don’t think his manager done it, I’m pretty sure it was the CIA. It wasn’t enough to chase him out of America, they still feared what effect his music would have on young people.

Defenestration seems to work for the Russians, simpler too.