That is a whole mess o’ buttons. I wonder what that one does…

How’d you tell which is the “red GO button” when everything is in black & white?

A sign lights up, saying “Please do not press this button again.”

I’ve got an urge to replay Portal 2.

I suspect there was a ton of sitting-around-shooting-the-breeze-time going on once that thing was built.

Back in the 90s I was lucky enough to go on a middle-school field trip to NORAD. Let me just say; that place is really cool. Spring dampened buildings, subterranean spring-fed water supply, massive blast doors in the access tunnel etc.
(Unrelated; I recall also enjoying a Crystal Pepsi with lunch after that visit… Ahh the 90s!)

I’ve got an urge to replay Portal 2.

I wonder if the only way in or out of the sprawling complex is a single nondescript shed out in the middle of a field somewhere.

I saw your big board, baby!

It’s amazing it all worked, isn’t it?

I wonder if the only way in or out of the sprawling complex is a single nondescript shed out in the middle of a field somewhere. 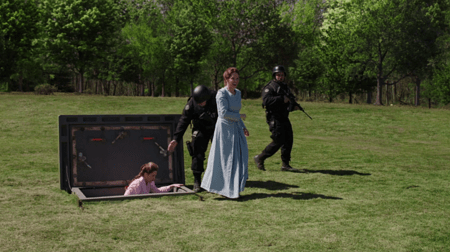 Crystal Pepsi? Was that the Meth based soda drink it is hard to put down?

Great Post. Your lead image, guy in the foreground, on the right; non-standard ashtray. Likely a commie.

You may have a chance missed your chance to find out for yourself:

Crystal Pepsi Is Back on Shelves Today

But it won't last.

I’ve been reading a book called Command and Control by Eric Schlosser. If everything in that book is true, then it’s a miracle the human species still exists. The Air Force had a dedicated bomber flying laps around the air base in Thule, for instance. If that bomber lost contact with Thule, the assumption was that the Soviets had initiated a nuclear war. Of course the bomber did lose contact with Thule, and that was nearly The End. Another time the bomber crashed almost on top of Thule, while carrying nukes.

The photos he shared will make you want to watch Dr. Strangelove again.

Every time you try to operate one of these weird black controls that are labeled in black on a black background, a little black light lights up black to let you know you’ve done it.

Way down here on level 7
Hiding from the radiation
We’ve got this to worry about
If there’s a leak, there’s no way out
There’s five thousand feet of rock
That should be enough to block
The side effects brought by our destruction
We can only feel privileged
No word from 1 through 5
Must assume no one left alive

Reminds me that I need to visit the Nike museum north of SF. We had a ring of them around the Bay Area, and other metro areas did too.

I don’t even have to look: straight-up sexy mountain…

You don’t need to. The last working Stargate on Earth is in that NORAD complex.