Walking while black, in Jamaica vs. the US

I’m thankful that British ice cream vans have far more variation. When I was a kid the local van used to play the Match of the Day theme.

Australian icecream vans all use Greensleeves.

…which has its own interestingly charged history:

One possible interpretation of the lyrics is that Lady Green Sleeves was a promiscuous young woman and perhaps a prostitute.[7] At the time, the word “green” had sexual connotations, most notably in the phrase “a green gown”, a reference to the grass stains on a woman’s dress from engaging in sexual intercourse outdoors.[8]

An alternative explanation is that Lady Green Sleeves was, through her costume, incorrectly assumed to be sexually promiscuous. Her “discourteous” rejection of the singer’s advances supports the contention that she is not.[8]

Garnette Cadogan, an old-school flâneur and essayist, wrote a fantastic piece describing the differences between walking while black in his home county of Jamaica, compared to New Orleans and New York City in the US.

I’m reminded of this bit from a piece written a few months ago:

In the weeks before my departure, I spent hours explaining Turkey’s international relevance to my bored loved ones, no doubt deploying the cliche that Istanbul was the bridge between east and west. I told everyone that I chose Turkey because I wanted to learn about the Islamic world. The secret reason I wanted to go was that Baldwin had lived in Istanbul in the 1960s, on and off, for almost a decade. I had seen a documentary about Baldwin that said he felt more comfortable as a black, gay man in Istanbul than in Paris or New York.

When I heard that, it made so little sense to me, sitting in my Brooklyn apartment, that a space opened in the universe. I couldn’t believe that New York could be more illiberal than a place such as Turkey, because I couldn’t conceive of how prejudiced New York and Paris had been in that era; and because I thought that as you went east, life degraded into the past, the opposite of progress. The idea of Baldwin in Turkey somehow placed America’s race problem, and America itself, in a mysterious and tantalising international context. I took a chance that Istanbul might be the place where the secret workings of history would be revealed.

In Turkey and elsewhere, in fact, I would feel an almost physical sensation of intellectual and emotional discomfort, while trying to grasp a reality of which I had no historical or cultural understanding. I would go, as a journalist, to write a story about Turkey or Greece or Egypt or Afghanistan, and inevitably someone would tell me some part of our shared history – theirs with America – of which I knew nothing. If I didn’t know this history, then what kind of story did I plan to tell?

Pop goes the Weasel is the ice cream truck standard, 'round my way.

I know the tune you speak of, but I’ve never known it by those racist lyrics; as a kid, the part I’m familiar with was “Do Your Ears Hang Low?”

This country is so damn weird.

I am a white foreigner who currently lives in a Caribbean country. I am often called out and heckled while walking around. Sometimes this is quite hostile. I have to say though that this is a pretty different experience from what he wrote about. For one thing, white privilege is pervasive here and protects you. So that even if people on the street are hostile it rarely means actual danger. Even the police are somewhat scared of foreigners. White privalege is shown it is raw form. This is not normal. This is deeply unjust.

Another thing to keep in mind is that people are ‘punching up’. They can be hostile but it comes from a place of frustration from decades of deep inequalities and injustice. They are frustrated that foreigners, especially white foreigners, can come around and enjoy their country, get treated with dignity and even special treatment while they are often seen as a problem in their own neighbourhoods. Yes, heckling is annoying to no end and it often makes me angry, but what happens to white foreigners in predominantly black countries is not the same thing as he is describing in this article.

I am a white foreigner who currently lives in a Caribbean country.

I lived in the USVI for few years; it was an eye opening experience.

Racism isn’t just widespread contempt of the other, it’s also a widespread lack of empathy.

I can dig it, but what about walking while gay in Jamaica? They’ll rip you to pieces. Tyranny of the majority, and indifference or outright hostility toward the minority is hell on earth.

Are you trying to make a point? Dignity is not a zero sum game. Affording it to one person doesn’t mean that there’s somehow less to give to another person.

Ooh, chile; that’s way more ex-pat than I was willing to go.

Props; it takes a certain caliber of person to break out of one’s comfort zone go live in a completely different environment…

It’s quite rewarding, though.

It’s quite rewarding, though.

I feel the same, although I did eventually decide to come back stateside.

Yeah, I don’t know what the USVI are like but here it is also quite tiring and you occasionally just have to leave.

There was no question in our minds at the end of it that we were more comfortable in Cuba. Our white skin marked us as sources of money in both countries, but the Jamaicans were just more aggressive about calling out to you with proposals (car, weed, women) and generally leaving you feeling sized up for predation.

Towards the last day or so, we stayed in our B&B and walked two blocks to the nearest two restaurants only. (Montego Bay is where tourists were basically confined to their resorts recently when violence there exploded.)

This guy’s experience is completely valid, too, of course, but how comfortable he was where we were very uncomfortable was thought-provoking.

Thank you. I had the same experience as a white man in some African countries. And indeed it is though-provoking.

Which, as I have read the answers to your post, does not mean that dignity is a zero-sum game or whatever. It just means that living that experience while I am normally used to not being noticed was thought provoking. I makes one think.

Foreigners draw attention for sure, but there are a lot of different kinds of attention.

White people in poor predominantly black countries where white people are tourists might be seen as marks (your experience).

Six-foot-one white women with pink hair in Japan are seen with curiosity (I’m told by a friend).

There is also the pedestrian (no pun intended) and ubiquitous unwanted attention of walking while female: 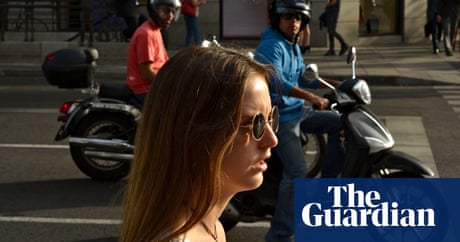 Women should not accept street harassment as 'just a compliment'

It's a myth that street harassment is just a bit of harmless fun. It's about about power and control – and can so easily turn to violence, Laura Bates

Walking While Female: A Story of Sexual Assault in Broad Daylight

Those of us who have worked in the service industry are very familiar with the 10-5 rule. This favorite of overzealous managers, inserted into every training session and employee handbook states that at 10 feet you make eye contact with a guest or...

Try walking while white in a poor black neighborhood. Being stopped by the police will be a blessing.

When a co-worker and I would walk to his place for lunch sometimes in the 1990s we’d have to take the long way 'round to avoid a certain couple of streets where my pale skin was not welcome. But honestly even though Philadelphia was a very racist and medium violent city at that time, there were very few places a white man wasn’t at least as safe as anyone else.

All that being said, if you went into some Jamaican or Dominican squatter neighborhood and survived, the Philly police would likely just laugh at your injuries and losses. Maybe give you a couple more.

Can you substantiate these particular claims of white victimhood with anything beyond mere hearsay?

Not, that is, with a news report or two of a white person getting mugged or something back then (anecdotes not equaling data and so on).

The ice cream van that comes around over here always plays the Italian national anthem. And it always sets off some of the dogs in the neighbourhood to howl along with it.
By now I’m so used to it that when I hear the anthem played on occasions like a sports broadcast it feels odd not to hear howling dogs, and I crave ice cream for a minute or so.

Props; it takes a certain caliber of person to break out of one’s comfort zone go live in a completely different environment…

I lived and worked in Hong Kong for a year. Would have stayed longer but my contract wasn’t renewed. It was awesome. I loved living there. The ‘white person’ jokes not malicious and I never felt in danger.

Cantonese was fucking hard to learn and I only got a few words by the end. Mostly how to tell the taxi driver how to get me home.

I lived and worked in Hong Kong for a year.

The ‘white person’ jokes not malicious and I never felt in danger.

Some folks don’t recognize punching up when they see it; I heard all kinds of ‘Yankee*’ jokes about myself while in the Virgin Islands, and never took it took to heart.

(*Anyone from the mainland is a Yank to native born islanders; even Southerners from Alabama and Georgia.)